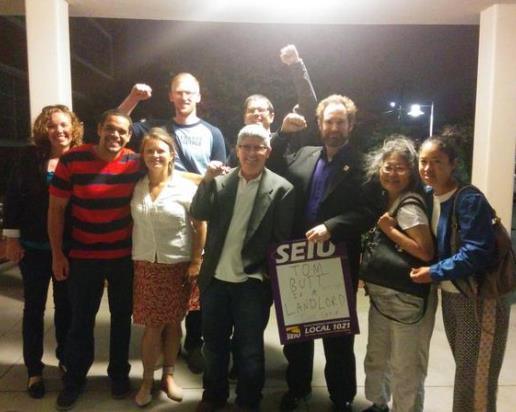 By a 4-1 vote, the City of Richmond passed a rent control law Tuesday night, prompting celebration among the broad coalition of tenants, labor allies, homeowners, and progressive community groups that packed the hearing chambers all night. Landlords turned out in force to oppose rent control, but had no support from any allies outside the landlord industry.

Vice Mayor Jael Myrick joined Councilmembers Jovanka Beckles, Eduardo Martinez and Gayle McLaughlin in casting the votes to pass rent control.  These councilmembers withstood an aggressive and well-funded lobbying effort by real estate industry representatives that tried in vain to persuade the Council that rent control was the wrong answer to rising rents and displacement.

Councilmember Nathaniel Bates cast the lone vote against the measure in the end. Mayor Thomas Butt and Councilmember Vinay Pimple were vehemently opposed, but did not cast votes because they walked out of the hearing when it became clear that Vice Mayor Myrick was going to support rent control, giving proponents the votes needed to pass the ordinance.  In a dramatic moment just before the vote, Butt stated, “I’m leaving. I can’t deal with this,” at which point he stood up and left the meeting, followed by Councimember Pimple. Moments later by a 4-1 vote, the Council passed rent control.

The Richmond law represents the first new rent control law in decades. The real estate industry threw everything they had at these council members, but were unable to derail these basic protections against unfair rent increases and arbitrary evictions.