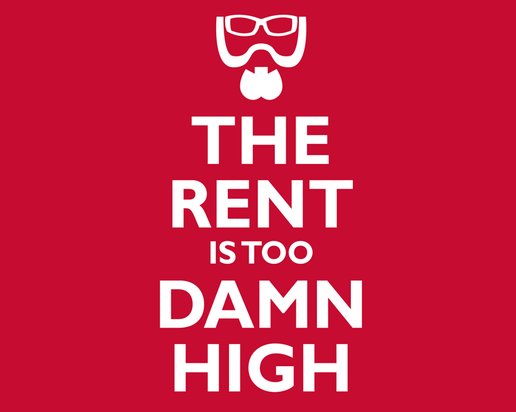 Mayor Tom Butt of Richmond is on a mission to make sure landlords can jack up rents in unlimited amounts on Richmond’s tenants. Butt acknowledges that Richmond rents are on the rise, but offers no meaningful solution to alleviate the burden rising rents place on seniors, families and others struggling to make ends meet. Instead, he offers real estate industry talking points against anything that regulates landlords.

Butt’s latest missive takes on Mike Parker of the Richmond Progressive Alliance. Parker wrote a thoughtful piece published on Beyond Chron detailing why Mayor Butt is wrong about rent control.

Butt challenges whether rents are truly outpacing inflation as Parker asserts, because “We don’t actually know what the rate of inflation is in Richmond.” Rents are outpacing inflation everywhere in the Bay Area, including Richmond. It is incomprehensible that the mayor of Richmond would not know this. Strangely, Butt then goes on to note that local residences “have soared in value by as much as 100%” which he celebrates as making them attractive to investors and restoring the city’s coffers. As Butt surely knows, soaring property values and soaring rents go hand in hand.

Butt’s accusation that Parker is seeking to “keep home values in the basement” is a cheap shot. As Butt knows, single-family homes are unaffected entirely by rent control because they are categorically exempt from rent control under state law. Butt would rather scare these homeowners about rent control than educate them about this basic fact. Moreover, when home values were in the basement, it was not because of rent control.

If Butt wants to blame someone for low property values, he should turn his ire to predatory lending practices and other factors that have targeted and abused his city and its residents. Rent control cities on the whole have done far better in terms of employment and economic prosperity than those without rent control. Whether or not rent control gets the credit for that prosperity, it is certainly clear that rent control has not undermined it.

A recent article, In Defense of Rent Control (Jake Blumgart, Pacific Standard Magazine, April 2015) is illuminating on this point.

“[NY Housing Lawyer] Collins argues that New York’s two largest building booms took place during times of strict rent controls: the 1920s and the post-war period between 1947 and 1965. (He is not arguing that the regulations provoked the building, just that they didn’t restrain it in the same way strict zoning codes did in the mid-1960s.) “New York’s moderate rent regulations have had few, if any, of the negative side effects so confidently predicted by industry advocates,” Collins writes. “More important, rent regulations have been the single greatest source of affordable housing for middle‐ and low‐income households. I should note that many of these findings came as a surprise to me. When I first joined the Rent Guidelines Board staff in 1987, I believed that rent regulations in New York City probably did have some long‐term harmful effects. I was proven wrong.”

Butt accuses Berkeley’s Rent Board of being “self-sustaining bureaucracy that operates without effective oversight and accountability” as if that bears some relationship to Richmond. He objects that the Berkeley program is self-funding, a strange objection in a time when fiscal restraint is so highly valued by most policy makers.

He also complains that commissioners are paid $500 per month. But it is all a sideshow. If Butt were really concerned with oversight or compensation at the Rent Board, he could simply join with advocates and develop a system for Richmond with oversight that he found acceptable. His goal, however, is to stop rent control, and alleging inefficiencies of other rent control systems is simply fodder for this purpose.

Butt also objects that the Berkeley Rent Board pays money to a lobbyist in Sacramento. Surely Butt understands that the real estate industry spends millions lobbying in Sacramento to deny cities the right to regulate rents, making it hardly surprising that some rent control cities might choose to defend themselves through lobbying.

Butt tries to argue that “relatively small number of rentals” would be affected by rent control. Census data is more accurate than Butt’s unverified claims. An estimated 5,000 homes would be subject to rent control, affecting nearly 15,000 people.

Butt’s suggestion that landlords cannot make ends meet under rent control is hard to swallow given how well landlords have done in all rent control jurisdictions in California. He also conveniently ignores the fact that every rent control law in California is subject to the limitation that the landlord has a right to a fair return on the investment.

Rent control laws allow rent increases, passthroughs, and other ways to make sure landlords continue to profit and rising landlord costs are offset. What landlords cannot do under these laws is arbitrarily evict tenants and impose exorbitant rent increases, the very practices Butt seems committed to defending.

As any good industry representative does these days, Butt then turns to voluntary self-regulation as the solution. According to Butt, “There are many reasons that many landlords do not push rents as high as they can go, the most common of which is to simply hang onto a good tenant. A bird in the hand is worth more than a bird in the bush.

Taking a chance that a rent increase might cause a turnover forces a landlord to incur the costs of advertising for tenants, cleaning painting and carpeting, interviewing tenants, foregoing rent for weeks or months and possibly ending up with a worse tenant.” That some landlords might choose not to push rents to the maximum is no case against rent control for all the other landlords that do not exercise such restraint.

Butt also argues “there is evidence that landlords under rent control automatically raise the rent the maximum amount every time they can legally do it so that they don’t forego the opportunity to do it later.” Apparently, Butt doesn’t understand that which he is attacking.

Some rent control laws, like San Francisco’s, allow landlords to “bank” rent increases, meaning landlords don’t lose the right to impose the increase by refraining from doing so in a particular year, completely undermining Butt’s argument. By now, everyone should understand that the phrase “there is evidence” without a citation from Mayor Tom Butt is the same as “my real estate industry friends say.”

Butt does acknowledge that rent control does not affect new housing. Yet incredibly he argues that rent control “acts as a deterrent to development simply because it signals an anti-business culture.” Developers don’t care about rent control since it has no impact on what they develop.

Rent control is not “anti-business.” In fact, many small businesses support rent control in part because they know that limiting rent increases leaves tenants with more money in their pockets to spend in local communities.

Rent control is the biggest thing standing between San Francisco and economic homogeneity. The real estate industry passed the Ellis Act and Costa Hawkins at the state level to create loopholes that allow speculators to evict entire buildings and raise rents without limits upon a turnover. It is particularly perverse to blame rent control, rather than the industry sponsored loopholes around rent control, for San Francisco’s displacement and loss of diversity.

No attack on rent control is complete without the author feigning concern for working people and claiming there are better ways to help poor and middle class people. Butt sticks to the script: “Instead of focusing on regulation to artificially suppress one component of a complex marketplace, I favor polices that lift up people and provide education and other resources that will enable them to better compete in an open market.”

He also touts his efforts to attract low-income and market rate housing development in Richmond. We will let Richmond advocates evaluate his performance overall. But on the issue of rent control, no amount of deflection and misinformation can change the fact that the single biggest thing the Mayor can do right now, at no cost to the city, to stabilize rents and prevent displacement for thousands of Richmond residents, is passing a rent control law.