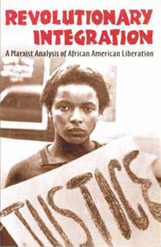 Revolutionary Integration tackles issues pertaining to racism, the Civil Rights Movement and the state of black America from the 1960s through the 1980s, as seen from a Marxist perspective.

Specifically, the authors address the notions of separatism as compared to integration, pacifism versus forceful resistance, American apartheid; the disparity amongst the classes, the role the white working-class should play in the black struggle, as well as the role of white women and homosexuals in the movement. Part one of the book suggest a massive surge of mobilization of the working-class, whereby the white blue collar community and the Black workers could ban together to over throw dominant bourgeoisie racist American values.

Initially, the discourse laden with Marxist/Socialist jargon, seemed heavy in theory, and lacking in practicality. However, the second part of the book, offers more concrete theory and history for which readers can gain a stronger sense not only of the time period and the movement, but also how this so-called strategy, Revolutionary Integration, might impact our society.

Richard Fraser and Clara Fraser wrote the first part of the book entitled “Dialectics of black Liberation,” which began as a resolution at the 1963 Socialist Workers Party’s convention. Here, the authors outline a strategy for Blacks in the southern “police state.” The Frazer’s strategy is as follows: 1) deny southern congressmen their seats in office, in order to cease the perpetual violent prejudice authority that the southern states have maintained for nearly a century, 2) disband and disarm authorities within the southern jurisdiction, including police and sheriffs, 3) instate a volunteer militia comprised of those who believe in the U.S. Constitution, and finally, 4) give the newly formed militia supervisory power over Congress to ensure universal suffrage of persons over the age of 18.

Although the message behind the Frazer’s theory: “racism as the prerequisite for capitalism’s establishment in our hemisphere and, just like sexism, is necessary for its continued rule,” although viable, the concept seemed vaguely communicated and underdeveloped, as if only to present a shell or skeleton for its readers. However, a more modern assessment of the notion of capitalism as a breeding ground for racism would prove worthy of discussion.

Fast forward seventeen years, and find author Tom Boot’s expanded version of the Frazer’s earlier work, in the second portion of the book, entitled “Revolutionary Integration: Yesterday and Today.” Boot analyzes radical Black leaders, contending that although the framework for revolution existed during the Civil Rights movement, weak and unorganized leadership could not ensure a successful strategy. Undoubtedly I welcome his criticism, but I must ask: can one centralized unit of leadership speak for hundreds of thousands of heterogeneous individuals, or did the dissention of the Black revolutionary leaders of the 1960s (and even today), reflect a natural split in ideology, offering a myriad of affiliations for which diverse individuals could associate?

The overall nature of the book promotes optimism and you got it, integration and unity of not only the white and black working classes, but of all oppressed peoples. In fact, the authors disagree with the idea of separatism because in order to win allies and make sociopolitical progress, a united front must exist to create class solidarity and dismantle the racist, capitalist ideals that plague our society. In Revolutionary Integration, readers find an in-depth look at the relationships between black revolutionary women and black revolutionary male leaders, and how feminism transformed this relationship, as well as the relationship between black and white women. Boot further assesses how black homosexual revolutionaries contributed to and impacted the Civil Rights Movement.

Red Letter Press published the book, and they publish an array of other books dealing with socialism, feminism, revolutions and leadership. If you appreciate strong theoretical criticisms and particularly Marxist theory, Revolutionary Integration will shed light on the Left’s efforts to understand and support the plight of Black Americans, as well as sexism and homophobia in the movement. If, on the other hand, you prefer more imagery and storytelling or biographical accounts, you might find yourself daydreaming about errands you have to accomplish. Revolutionary Integration, suggests hard and fast tactics for crushing racism and destroying American apartheid.