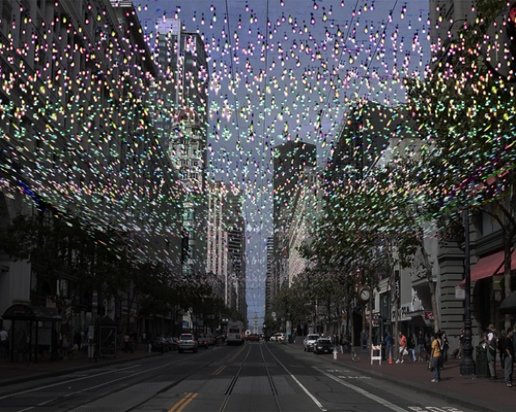 None of these adjectives would have been used to promote Market Street prior to the city’s 2011 enactment of the Mid-Market/Tenderloin payroll tax exemption. This  brought Twitter to the historic 9th and Market SF Furniture Mart building, and the biggest wave of investment to Mid-Market since the 1920’s.

The festival highlights the food/arts synergy essential for Mid-Market’s success. Two newcomers to the area—CounterPulse, which is renovating its new home on lower Turk, and The Hall, which opened last fall at 1028 Market, are collaborating in an opening reception at The Hall on Thursday, April 9 from 4PM-6PM. People can enjoy drink specials while performances continue out front in a streetside performance hub designed by Jensen Architects.

CounterPulse alone will be hosting over 50 performers across three days of pop-up programming for a performance filled weekend on the block. The group’s commitment to the area shows announced why so many of us were excited when the group announced it was moving from 9th and Mission to the Tenderloin.

The Hall proves that Mid-Market can support quality restaurants. That’s important, because with tourist hotels being built and renovated in the area, it would be a huge missed opportunity if these guests had to always leave the Mid-Market/Tenderloin to eat.

The opening of the ACT Strand on May 14 means that theater audiences will be pouring on to Mid-Market also looking for late night quality eats. If you are looking to open a restaurant to appeal to late night diners, forget about the over saturated Valencia Street corridor; there are better and lower rent opportunities in the Mid-Market/Tenderloin.

Adding to the activities along Market Street from April 9-11 is the return of the Night Market at UN Plaza. The Night Market proved a surprisingly big success. It attracted large crowds to UN Plaza and appears to have improved the area even when the night market was not functioning (UN Plaza has regressed since the Night Market stopped, and its resumption will hopefully reverse this).

The Night Marker continues every Friday night from 5 p.m. to 10 p.m. until October 30 with the exception of June 26. This Friday’s event features the legendary Fillmore District saxophonist, Bobbie Webb.

Those concerned that Mid-Market’s revival would negatively impact nearby tenants got some very positive news last night. The Board of Appeals voted 4-1 to reject efforts by the owner of 1049 Market to get permits to demolish rent controlled housing and evict the 40 remaining tenants.

In November 2013, “Eviction Battle at 1049 Market Will Shape Mid-Market’s Future,” I described why the landlord’s efforts to convert residential units to commercial offices made no economic sense. It even makes less sense today, given skyrocketing rents on nearby apartments. Yet the landlord continues to put personal stubbornness ahead of his own economic interest, jeopardizing rent controlled housing in a Mid-Market neighborhood where there is very little.

Tenants at 1049Market appealed the lifting of the suspension of their landlord’s permit to demolish their units to the board of appeals. They were represented at the   April 8 hearing by Steve Collier of the Tenderloin Housing Clinic (THC publishes Beyond Chron). Tommi Avicolli-Mecca of the Housing Rights Committee played a critical role in organizing turnout for the hearing.

If the landlord had prevailed, Mid-Market would have been the scene of what many believe is the largest mass eviction in San Francisco history since the I-Hotel.

The tenants have been fighting eviction for almost two years now. Most are artists paying below market rents. The landlord resumed plans to evict tenants in 42 units in late March, and effort now frustrated by the Board of Appeals revocation of their removal permit.

Mayor Lee, Zoning Administrator Scott Sanchez, DBI Director Tom Hui, and other DBI inspection staff played a crucial role in keeping these tenants in their homes and saving over 70 units of rent-controlled housing. Maintaining housing at 1049 Market Street is a big win for Mid-Market, and for all those who care about the future of that rapidly reviving neighborhood.

Randy Shaw discusses Mid-Market’s revival in his new book, The Tenderloin: Sex, Crime and Resistance in the Heart of San Francisco, available April 21. Shaw speaks about the book at SPUR on May 5.