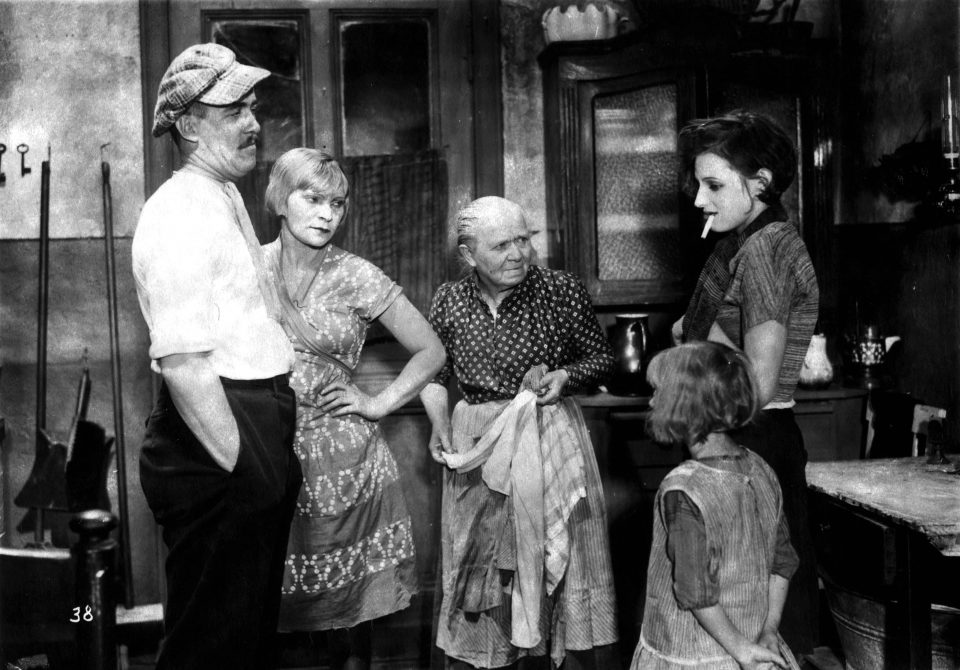 Ironically, despite the permanent smile on his face, Veidt’s character Gwynplaine is never seen laughing in the film.   The tragedies that have befallen him leave little room for mirth.

Gwynplaine has a permanent smile carved into his face by the comprachico Dr. Hardquanonne as punishment for his father Lord Clancharlie’s rebelling against King James II.  When the boy is left to die in the winter cold, he rescues a barely-alive baby girl before managing to reach the safety of traveling philosopher Ursus’ wagon.

Gwynplaine grows up to be the famed performer known as The Laughing Man.  The baby girl grows up blind to become the innocent but beautiful Dea.  Gwynplaine loves Dea but fears that her knowledge of his face’s permanent smile would cause her to reject him.  A chance encounter with Dr. Hardquanonne at a fair leads to Gwynplaine’s getting entangled in several nobles’ schemes.  Chief among the schemers are the sensual Duchess Josiana and the ambitious adviser Barkilphedro.

Paul Leni’s darkly entertaining adaptation of Victor Hugo’s novel receives a restoration to mark the 90th anniversary of its original release.  It’s filled with such timeless staples as freakish but good men, true love, exciting pursuits, and even a race against time.

Also, some aspects of Leni’s film have admittedly dated.  Homophobes will chuckle over some of Ursus’ commands to wolf Homo.  There’s an obviously fake wolf seen in the dramatic finale.  A spectacular chase and images of the proverbial crowd of thousands can seem like commercial sops to get the public to watch an otherwise psychologically insightful tale.

But these cavils pale next to the emotional heart that is Veidt’s performance as Gwynplaine.  His character’s surgically forced smile draws the viewer’s eye so effectively that when Veidt can get the viewer to notice the pain or fear behind Gwynplaine’s smile, it feels like a major breakthrough.  Dea’s eventual revelation of her true feelings for Gwynplaine shames the viewer into realizing this blind innocent sees Gwynplaine far better than her sighted peers.  That humbling moment marks just another reason to check out this festival opener.

“An Inn In Tokyo” is one of celebrated Japanese filmmaker Yasujiro Ozu’s last silent films.  Its 1935 release doesn’t date the film as struggling with unemployment, homelessness and starvation are unfortunately timeless subjects.

In the wastelands of Tokyo’s industrial Koto district, poor and unemployed Kihachi looks in vain for factory work.  Accompanying him are his young sons Zenko and Masako.  Finding stray dogs for reward money helps this decimated family to barely scrape by.  Zenko’s purchase of an officer’s cap seems to launch Kihachi’s family on a final downward spiral.  But a chance encounter with café owner and old friend Otsune seems to portend better days are just around the corner.  However, Kihachi’s desire to help the homeless Otaka and her sick daughter Kimiko winds up forcing Kihachi to take desperate measures.

Ozu’s simple story dramatizes a terrible decision far too many poor people face.  You’re aware of your survival needs but lack the resources to meet all of those needs.  Which needs do you support and which do you let slide?

The awfulness of Kihachi’s family situation feels worse because of a persistent cloud of tantalizing abandonment.  Zenko and Masako lack their mother’s love or presence.  The only shelter Kihachi can afford provides only a floor to sit down on and a roof overhead.  The thriving factories in the distance taunt Kihachi with a sense of employment forever out of reach.

A “family picnic” delivers the emotional nadir of Kihachi’s situation.  After losing everything except the clothes on their back and head, Kihachi and his boys raise their spirits by miming enjoying a family picnic generously bursting with food and drink.  For the viewer, the family’s mock pleasure emphasizes the desperation of their situation.

While the film’s first half can be followed thanks to its heavy visual storytelling, lack of subtitles on the review copy make the film’s more dialogue-heavy second half difficult to puzzle out.  Unless either a subtitled print or a live translator is available at the festival screening, it’s unreasonable to fully recommend this film.

Unfortunately partial German silent film “People On Sunday” delivers a lively portrait of Weimar-era Germany at leisure.  This 1930 product of such future Hollywood luminaries as Robert Siodmak, Edgar G. Ulmer, and Billy Wilder entertainingly mixes a fictional story performed by non-actors with documentary footage.  Despite losing nearly 200 meters of footage, the film still enchants even as the future’s shadow hovers over the viewer’s awareness.

The playful and admittedly simple story provides a balancing human face to the fascinating documentary footage of Berlin at peace.  While the quartet at Nikolassee goes for a swim, other beachgoers have their photographs taken or just sun themselves.  For those who stay in the city on this Sunday, the city at rest allows for time to appreciate the legacy embodied by old statues or even listen to a concert.

The film’s more overt message may be that waiting for the weekend is actually a decades-old desire.  But the questions that present-day viewers may also ask of these happy people concern how the approaching Nazi era would change them.  Which of the five non-actors would wind up corrupted by the Nazis?  How many of the buildings and parks seen in “People On Sunday” will wind up reduced to rubble by World War II’s end?  This film definitely brings a smile, but the happiness represented soon gives way to melancholy.

By contrast, melancholy about future decades’ events gets scared away by the effervescent lead performance of Leda Gys in “Trappola.”  Eugenio Perego’s 1922 comedy features this much-loved Italian film diva in an early star turn.

Gys plays orphaned Leda Bardi, whose mixture of intelligence and trouble-making makes her a handful for the Sisters of her convent/orphanage.  When best friend Laura Fiore has her heart broken by potential fiancee Claudio’s falling for circus acrobat and film actress Furetta, Leda plans to break up Claudio’s romance and return him to Laura.  But Leda’s efforts wind up involving everything from stolen jewelry to an unexpected movie career.

“Trappola” delivers a bubbly mix of farce, misunderstandings, and cheerful anti-authoritarianism.  Authority figures generally turn out to be bumbling fools or controlling idiots.  Gys’ character cheerfully runs rings around them through her generally brash determination.

Physical education and rhetoric teacher Don Bernardo plays straight man to Leda’s mischievous antics.  Whether he’s Leda’s unwitting courier or an unexpected host, the elderly teacher likes Leda enough to help her out when he can.  But Don Bernardo’s support for Leda doesn’t mean he’s a soft touch when Leda’s plans get truly out of hand.

The Silent Film Festival’s motto is “true art transcends time.”  After watching “Trappola,” it can only be hoped that more of Gys’ comedic art will be presented at future festivals.

Piel Jutzi’s “Mother Krause’s Journey To Happiness” also has moments of levity and even love.  Yet this powerful tale based on Heinrich Zille’s stories presents a piercing portrait of German tenement life.  Its realism is aided by filming in the locations that inspired Zille’s works.

In Berlin’s North Wedding district, the poor and unemployed reside in its generally sunless tenement blocks.  The elderly Mother Krause lives in a tiny cramped apartment with her adult children, daughter Erna and son Paul.  An unnamed Lodger lives in another room along with the prostitute Frieda, and Frieda’s little girl.   Mother Krause barely scrapes by through selling newspapers to tenement residents.  But after alcoholic Paul spends all of Mother Krause’s newspaper earnings on a drunken spree, the Krause family’s future is endangered.

The film’s pro-Communist politics probably played a significant role in making this movie unknown in the U.S.  Max, one of the supporting characters, turns out to be a Communist activist with a portrait of Marx in his apartment.   While capitalists of various stripes exploit or persecute the Krause family, it’s Max who winds up becoming their only ally.

But on seeing the footage filmed in these 1920s Berlin slums, it’s impossible to sympathize with an economic system that treats such living conditions as normal.  The Krause apartment has Erna and Frieda’s child sharing a room with the tiny cooking and dining area.  Dirty streets provide the only recreation areas for children.  The faces of these downtrodden dwellers remind one of half-squeezed orange halves waiting for further squeezing out of its juices.

The closest “Mother Krause’s Journey To Happiness” comes to direct polemical engagement comes in two moments.  One is a march for better housing, where Erna looks for Max.  The other is a memorable quote from Zille that “You can kill a man with an apartment just as well as with an axe.”  Were there more directly confrontational moments found in the 20 minutes eventually censored from the film’s original length?  In terms of film footage, that question can’t be answered since much of that excised footage has been lost.

Watching Jutzi’s film feels like a disorienting experience after seeing “People On Sunday.”  While the film of Siodmak et al. had small nods to the existence of poverty, those quietly sobering moments felt overwhelmed by the joy and happiness which dominated the picture.  Jutzi’s film by contrast shows the sociopolitical conditions on the other days of the week that would make Nazism seem like a reasonable alternative.

These comments should not be taken to mean that Jutzi’s film is emotionally arid.  Erna and Max’s romance proceeds along joyfully sweet and loving moments.  Paul’s drinking to excess feels like a tragic weakness.  The growing pain and desperation in Mother Krause’s eyes in the aftermath of Paul’s bender will have you rooting for even the slightest chance of salvation for her.  Finally, the meaning of the film’s odd title may be casually revealed.  But its significance hits the viewer with a sledgehammer’s impact.