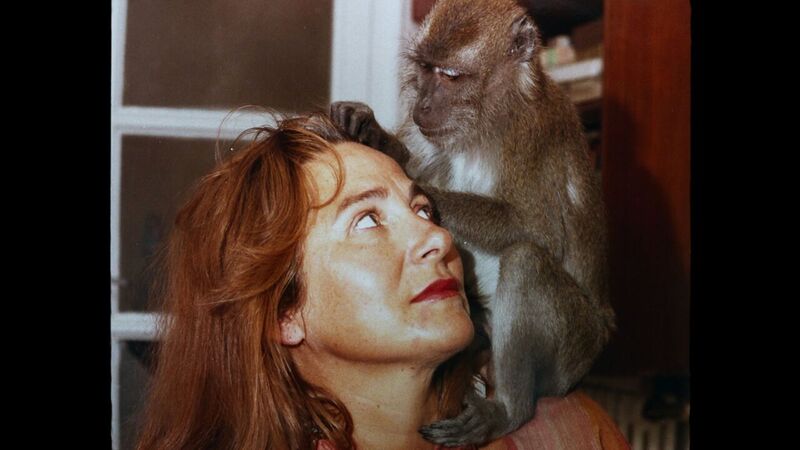 Lots Of Kids, A Monkey, And A Castle

Early in Gustavo Salmeron’s highly entertaining and amusing documentary “Lots Of Kids, A Monkey, And A Castle,” central film subject Julia “Julita” Salmeron claims that nobody would be interested in watching her son’s film.  She considers it a glorified home movie, of interest only to the Salmeron family.  However, viewers who’ve had eccentric relatives they still love will testify to the film’s ability to touch even people outside the director’s clan.

The film’s title may provoke puzzlement.  Understanding emerges once Julita explains the reasoning behind these three items, which were her life goals.  A desire for lots of children led her to have six of them.  The monkey was the one pet she never had as a child.  Living in a castle seemed a cool but unreachable thing to want.

Julita’s goals charm the viewer because the desires behind them aren’t presented with any sense of entitlement or greed.  She possesses enough common sense to ground the achievement of her desires.  The monkey’s far from civil behavior eventually convinces her to give up on the animal, for example.

Ironically, Julita’s sensibleness becomes a hindrance when the film’s central crisis is revealed.  Financial hardship forces the Salmeron clan to surrender their castle to creditors.  The impending loss of the castle inspires the semi-reasonable idea of taking as many things as possible with them.  But the details of implementing the plan border on insanity.  The Salmeron matriarch wants just the family members to clear the noticeably spacious castle in a short period of time.  But plenty of the castle’s nooks and crannies are filled with items Julita kept over fourteen years of living there.  A broken cane, over a hundred hand-sewn doll dresses, and audiocassettes of Christmas carols are just some of the items forming a fraction of her hoard.  People who live in a Spartan manner will have headaches just looking at Julita’s very stuffed closets.

Of particular dramatic importance is locating a couple of human vertebrae and burying them.  These bones are the last remains of Julita’s grandmother.  But that search turns out to be a McGuffin.  The film’s real spine comes from learning about Julita’s past and the semi-chaotic but happy lives the family led before their financial difficulties arose.

One particularly shocking revelation is learning this warmly eccentric mother belonged to the Falangists (the Spanish Fascists) in her younger days.  However, despite her grandfather’s prominence, Julita held a very low position in the Falangist pecking order.  Her present day reaction to a public address by the Spanish King confirms that Julita decidedly lacks political savvy.

Julita’s political shortcomings winds up being outweighed by her generally kindly eccentric nature.  She can explain why poking her husband at night with a telescoping fork shows her love for him.  Her ruefulness at doubling her weight from 50 kilos at marriage to 100 kilos is genuine.  But that knowledge doesn’t stop her from eating a platter-sized breakfast sandwich containing three or four fried eggs and other high-cholesterol items.

The film’s ultimate takeaway might be remembering the disconnect between achieving a life goal and personal happiness.  Even though two of Julita’s life goals eventually came to naught, having the love of her many children and grandchildren was ultimately the goal that mattered.  Don’t miss this heartwarming gem.

Hong Sang-soo tries playfully engaging with male-female behavior and heavy drinking in his inconsequential “Claire’s Camera.”   Four people’s paths cross and re-cross at the Cannes Film Festival: Director So (the Hong stand-in), producer Yanghye, assistant Manhee, and Parisian teacher Claire (Isabelle Huppert).  The quartet discusses everything from a photograph’s symbolism to the “message” sent by hot pants.   While Hong earns props for having Bechdel Test-approved moments, the English language conversations feel distracting rather than insightful.

Johann Lurf’s playful film clip compilation “* (Star)” transforms the tools of spectacle into a mirror on the collective human soul.  It’s one of those films whose immersive possibilities might be lost if watched on a hand-held device.   Then again, film-going audiences who insist that films adhere only to a beginning-middle-end structure will quickly find Lurf’s film an exercise in tedium.

Readers made of sterner stuff will have correctly guessed that Lurf’s film lacks a plot.  It draws clips of space and the night sky from over a century of films from such countries as the United States, England, Germany, Russia, and Japan.  The various “Star Wars” and “Star Trek” films are naturally found here.  But seeing clips from “The Misfits” and “Mad Max: Fury Road” will surprise a few viewers.  Then again, Lurf has a cinematic toy chest of films ranging from the early 1900s all the way up to 2017.

Lurf’s editing of the voluminous clips creates a sort of cinematic symphony.  Certain emotional themes emerge from Lurf’s juxtaposing of thematically similar clips.  Some of these themes include space as yet another frontier to be boldly conquered, the stars as being a haven of endless threats, and a place whose vastness underscores how little humanity really knows about the Universe.

“* (Star)”’s soundtrack is evocative in a different way.  The snippets of music and dialogue run to various lengths.  An older generation would liken “* (Star)”’s soundtrack to spinning a radio tuner dial through every available frequency.  Whatever label is used to describe the effect, it doesn’t matter that monolingual English speakers will frequently be left puzzled.  The emotions behind the non-English words generally come through clearly.

The audio clips by comparison show a commensurate lack of emotional sophistication.  “Star Wars” and its brethren paint space as another venue of present and future conflict.  “It Came From Outer Space” and its ilk treat space as a garden of strange and unusual dangers.  The “Star Trek” clips by comparison at least ring with the power of optimistic curiosity.

Thanks to light pollution, many urban dwellers lack the opportunity to see their place in the universe or even their deepest desires mirrored in the night sky.  “* (Star)” may offer an entertaining alternative, especially as it ultimately hints that the end has not been written yet.