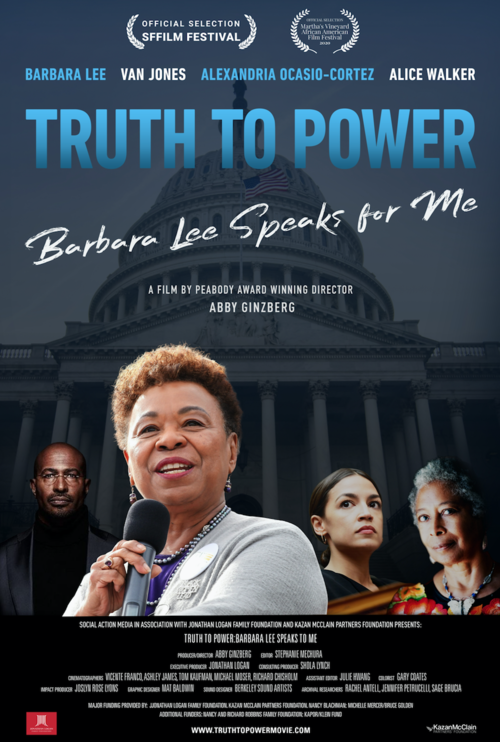 “Truth To Power: Barbara Lee Speaks For Me”

Representative Alexandria Ocasio-Cortez recounted in Abby Ginzberg’s new biographical portrait “Truth To Power: Barbara Lee Speaks For Me” a piece of advice Rep. Lee gave her about fighting for social change in the halls of Congress.  The Oakland Congressional representative told the Bronx Congresswoman that when you know where the country needs to go, you need to step out onto the corner continually until other people come around.

Representative Lee, the subject of the Opening Night Film for the San Francisco Jewish Film Festival’s Cinegogue Summer Days event (July 13-16, 2020), can personally attest to the truth of that advice.   She may have served many years representing the nation’s most progressive Congressional district, as she calls it.   Yet it wasn’t until last year that the House of Representatives finally set up a committee helmed by Rep. Lee to look at the breadth and depth of poverty in America as well as its effects on every U.S. citizen.  Quite a change from the advice given early in Rep. Lee’s Congressional career to not mention poverty to her political colleagues at all.

But as Ginzberg’s film effectively  shows, Barbara Lee’s political career has been continually marked by being ahead of her colleagues’ political curve.  She has no regrets about proposing bold ideas for new laws.  If they pass untouched, then her political agenda has been pushed along that much faster.  If it’s necessary to trim a proposed law back to obtain a colleague’s vote, then at least she left room for compromise.  Quite a contrast from Congresspeople who propose meeker ideas because they’re more “politically palatable.”

Ginzberg’s documentary makes clear early on that being more forward-thinking than her Washington colleagues does have political costs.  Time has shown that the Authorization for Use of Military Force (AUMF) essentially amounted to giving the sitting President of the United States the unfettered ability to wage war anywhere he or she wanted.   When the crucial vote for the AUMF came up in the House of Representatives, Rep. Lee cast the sole “No” vote.   Given that the AUMF vote was taken while America was still in shock and anger over the September 11, 2001  attacks, that dissenting vote made her a scapegoat for angry “patriots” obsessed with retaliatory killing.

Correcting the record isn’t the reason Ginzberg devotes time to discussing Rep. Lee’s dissenting vote and its aftermath.  The film’s subject allows that even allies’ votes for the AUMF came out of the human need to want justice for that national outrage.  What Ginzberg allows Rep. Lee to do is to tell of the personal difficulties she faced coming to that decision, a process far more complicated than the simplistic dismissal of her as a coward.  For one thing, had United 93 not crashed before reaching its target, Oakland’s Congressional representative would have been among the prospective casualties.  Rep. Lee had actually read the AUMF text and was greatly troubled by the absolute power it was asking for.  She also noticed that the speeches during the 9/11 national memorial event had nothing to do with supporting the attacks’ survivors’ efforts to  heal.  It took Reverend Nathan Baxter’s warning against becoming the evil we deplore that convinced her that voting against the AUMF was the right thing to do.

One consequence of Lee’s dissenting  AUMF vote was her constituents’ coining of the slogan “Barbara Lee Speaks For Me.”   But Ginzberg’s film shows that unlike the type of politician who panders to a cause du jour, Rep. Lee’s positions spring from  the conscience of Barbara Lee the person.

That conscience, as a viewer might expect, was forged from Lee’s life experiences.  One such experience is that of  the El Paso hospital which  used skin color as a rationale for withholding medical treatment from the mother pregnant with the future Congressional representative.  The incident feels like a  literalization of the old saying about racist whites denying Black Americans the very right to exist.

Even after she was born and before she formally got into politics, Lee had to fight a social system stacked against her.  Fulfilling her desire to try out for a San Fernando high school cheerleading squad required bringing in the NAACP to overcome the school’s racist refusal to allow Lee a shot.  Roaming the streets and sleeping in fleabag hotels with her two young sons was preferable in the pre-Violence Against Women Act days to continuing to live with a husband who regularly beat her.

One irony that arises in the film is Lee’s not initially perceiving politics as a medium for changing the world for the better.  Volunteering with the Black Panthers, Lee saw the group’s best social safety net ideas like school lunches for poor children and free medical clinics co-opted by the federal government.  In fact, voting seemed like a bourgeois activity to her.  It would take involvement in Shirley Chisholm’s unprecedented presidential campaign for Lee to start seeing the wisdom of Chisholm’s declaration that wanting social change requires being part of the system.  Becoming a member of the House Appropriations Committee, for example, means being able to monitor and direct the way public moneys are spent.

The film shows what has kept Rep. Lee from being corrupted by the lure of power in Washington, D.C. has been her continual striving to help people first.  Instead of staying distant from her constituents except during Congressional recesses, Rep. Lee is one of the few Congress people to make weekly visits to the district she represents.  Her own experiences with poverty and the government assistance that helped her get out of it makes her well aware of the human cost of proposals to shred the social safety net.    Footage from several of Rep. Lee’s community meetings show that her constituents recognize and appreciate their representative’s candor and empathy.

Ginzberg’s interviews with Lee’s colleagues in the House of Representatives show the respect and admiration they hold for her.  Former Civil Rights activist John Lewis sees in Rep. Lee a kindred spirit in the making of “good trouble.”  Aside from AOC, Rep. Lisa Blunt-Rochester appears on screen to cite Rep. Lee as a personal inspiration.

“Truth To Power” ultimately empowers the viewer by showing the potential of having more Barbara Lees in Congress.  It may take going on the Civil Rights Pilgrimage to remember the work of those who fought for America’s grand promises to have down-to-earth substance.  It might take a standing intolerance for injustice and a dedication to find solutions to help people.  It might even take a determination to prevent the hardships that befall a person from afflicting those who come after.  Whatever the path to reform, Lee and the film about her remain optimistic that working both inside and outside the existing political system can make that reform happen.

Stuffing 63 boxes of her dead mother’s personal belongings into her small apartment doesn’t make director Judith Helfand a packrat.  Her new documentary “Love And Stuff” shows the box disposition problem (and the interconnected grief) is just one of several major challenges, such as handling new adoptive motherhood at age 50 and losing 50 pounds of weight, landing on her figurative doorstep  seemingly simultaneously.   Smiles and grimaces will accompany watching Helfand’s chronicle of sometimes hard but necessary decision-making.

Susan Fanshel and Veronica Selver’s loving documentary “Irmi” recounts the very eventful life of Veronica Selver’s mother Irmi Selver.  Hanna Schygulla’s charming reading of Irmi’s memoir helps ground this life of a woman whose life of privilege gave way (thanks to war and sometimes forced relocations) to frequently rebuilding her life anew.  Calling Irmi a survivor ignores the truth that despite her many changes in fortune, her basic kindness and joie de vivre remained intact over the long run.

Charles Davenport’s  silent film “Broken Barriers (Khavah)” turns out to be the first American adaptation of one of Sholom Aleichem’s Tevye stories.  However, viewers expecting something wistful or genially melancholic a la “Fiddler On The Roof” will be disappointed.   This tale feels like something whose historic interest outweighs its artistic value.

Khavah is the eldest daughter still living with the poor Jewish farmer Tobias and wife Golde.  She’s happy with her life until the day university student Fedka and his drunken friends accost Khavah’s younger sister Celia.  Fedka’s physical defense of Celia steals Khavah’s heart, and leads to her falling in love with him.  But when Tobias forbids Khavah from being with the young gentile, the young woman’s rebellious response tears the Jewish family asunder.

Modern audience members may understandably roll their eyes at the film’s unapologetic sexism and the obviousness of the film’s more “philosophical” title cards.  However, these problems reflect the unfortunate cultural mores of the time.  And yet these aren’t “Broken Barriers”’ biggest faults.

Despite its source material, Davenport’s semi-tedious film feels in line with the bigot pandering that would typify far too many American commercial films.  The story may be set in the rural Ukraine of the 19th century.  Yet why is the male lead character and the younger (and prettier) daughter given pronouncedly  Anglo-Saxon names?  It’s almost as if such a move was a backhanded admission that empathizing with someone from a different religious background was beyond the capability of more bigoted audience members.  Even if the renaming doesn’t rise to the level of offensiveness of having white actors play lead characters of color or gratuitously translating an Asian character’s name, it still comes across as an artistic insult.

More damning is the way “Broken Barriers” refuses to openly admit the existence of anti-Semitism.  The guarded religiously-based hostility between not-Tevye and the village priest is treated instead as part of the father’s frustration over his daughter’s actions.  A very important edict from the Tsar has its bigoted basis handwaved away, even though the Jewish family has not been involved in criminal activity or even been a public nuisance.  Most significantly, gentile persecution of Jews  as a motive for un-Tevye’s opposition to Khavah’s romance gets ignored in favor of “our family reads Hebrew and Fedka’s family does not, therefore this relationship is bad.”  If Davenport’s aim was to make faux-Tevye the bad guy, he succeeded.

But the ultimate sin of “Broken Barriers” is its embracing the racist notion of the total inability of peoples from different cultures to find common points of agreement.   Khavah’s love for Fedka matters less in the long run than the supposedly huge differences between life in un-Tevye’s household and life in Fedka’s family.  Khavah may think she’s doing something heroic in breaking cultural barriers.  Yet the film ultimately extols the virtue of maintaining Jim Crow-like social barriers between gentile and Jew.