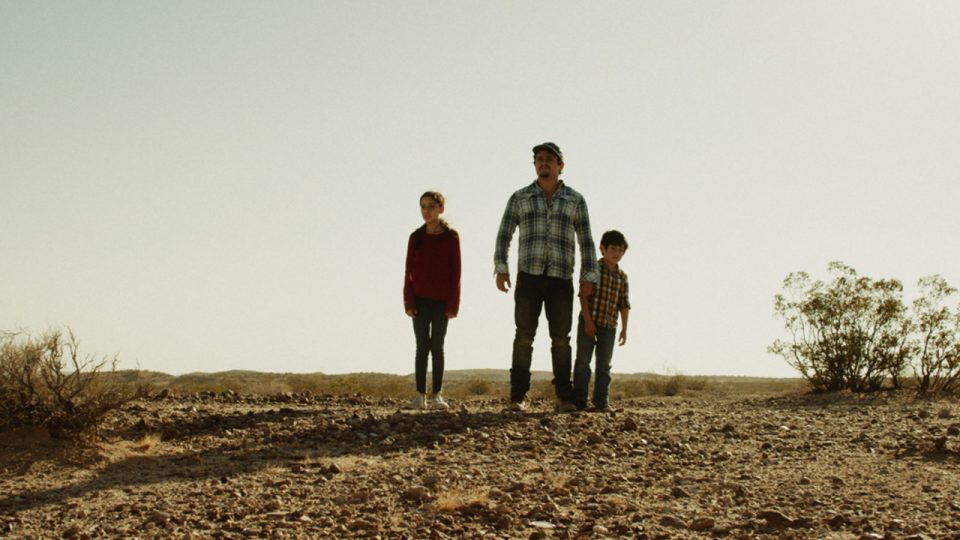 A famed moment from Chris Marker’s classic short “La Jetee” and the theoretical environment around a black hole influence the atmosphere of the short  “The Day That.” Dorian Tocker’s film follows an unnamed suburban nuclear Islamic-American family dealing with their father’s/husband’s sudden death. The cause of the male parent’s demise is never specified, nor does it matter.   What matters are the small details that capture the reaction of family members to this unexpected shattering loss. They range from the uncomprehending family dog playfully bounding to a grandmother mourning in a mosque at having her child precede her in death.

The black hole aspect comes from a palpable sense of the more aware survivors’ emotional energy being sucked from them and seemingly permanently trapped.  The daughter is too young to understand the specifics of what’s happened. The girl’s little project with a bungee cord and a toy superhero feels like her way of literalizing the spirit of her father floating above her.  By contrast, the son (who looks like a teenage version of his dead father) reacts with more anger than justified to an accidental shove at a pickup basketball game.

The “La Jetee” influence comes from the moment in the Marker film where its visual style of accumulated still shots breaks for a moment to show its female lead slowly and suddenly blinking.  Tocker borrows that effect for a sequence showing the central family and their friends celebrating the 4th of July. The still shot of the father gazing at the booming fireworks seamlessly yields to his blinking at the colorful explosions.  That sudden change transforms him from a consumer of public spectacle to someone who understands the meanings and implications of the bedlam of noise and color surrounding him.

When Tocker repeats this cinematic effect a second time, the repetition has more import than playing with a neat cinematic technique.  It symbolizes how personal recollection not only transcends the physical loss of a family member but becomes a pathway to healing.

“Collisions,” the title of Richard Levien’s seething debut feature, comes from an old Mexican proverb.  “Some are born under a lucky star, and some are born into collisions,” the saying goes. In the case of lead character Itan, this 12-year-old girl will get a firsthand immersion in her proverbial birthright.

This locally set film begins in San Francisco, where American-born Itan Bautista (a strong Izabella Alvarez) goes to school and dreams of pursuing a career in science.  However, her hopes of living like a normal mall-dwelling teen are undercut by her having to care for younger brother Neto. Widowed mother Yoana can’t help much because she works several jobs to keep the family going.  But Itan’s life soon gets more complicated when Yoana gets arrested in an ICE raid of the Bautista home and denied a chance to contact her children. Itan and Neto reluctantly rely on their unreliable uncle Evencio, a truck driver estranged from sister Yoana for unspecified reasons.  The 12-year-old girl soon struggles with everything from preparing for an important test to making a cross-country effort to find her mother before ICE deports her.

Levien’s film would not have come into existence without the support and sponsorship of SFFILM and the Kenneth Rainin Foundation.  It’s unlikely a bigger studio would have financially supported a film painting ICE as overall an incredibly callous organization, despite real-life events revealing the scope of that organization’s institutionalized brutality.  The ICE of “Collisions” primarily exists as a human deportation machine. Worries about the emotional effects of deliberately separating undocumented parents from their American citizen children are clearly Not ICE’s Concern. Yoana’s anxiety-induced asthma attacks or continued inability to talk to Itan and Neto do nothing to slow down ICE’s deportation machinery.  The closest ICE comes to actual physical thuggishness comes with the Bautista apartment raid. ICE personnel brandishing drawn guns seems entirely gratuitous unless those three tall armed men worry Yoana’s suddenly flashing open her bathrobe counts as a deadly weapon.

“Collisions” attacks current American immigration policy, but not as if it’s an artistic siege of a bureaucratic castle.  Instead, Levien shows the human consequences of America’s draconian immigration enforcement policy. Stress and anxiety about her mother’s fate endanger Itan’s dedication to her future science career.  ICE’s abrupt cross-country shuttling to deport captured immigrants feels as if the bureau treats its captives as human toxic waste.

Evencio’s frequently grudging support ramps up the tension between the children and their uncle.  It also doesn’t help that Itan knows why Yoana is estranged from Evencio and resents him for it. What starts softening Itan towards her uncle is the latter’s becoming a needed father figure for Neto.

Levien displays a nice sense of dramatic flow throughout the film.  The race to prevent Yoana’s deportation is urgent. But equally important are Itan’s and Evencio’s personal journeys to find forgiveness or even make amends to one another.

“Collisions” would not work as well as it does without Izabella Alvarez’ performance as an intelligent child.  Alvarez doesn’t need to throw out allegedly clever one-liners to show her intelligence. She simply demonstrates a deeper understanding of events than adults give her credit for while also recognizing her personal limits.  ICE’s decisive stymying of Itan and Neto’s attempted reunion with their mother finally forces Itan to turn to Evencio for help.

Levien deliberately leaves unresolved Itan’s response to a final collision.  That decision effectively underscores the lack of any upside to the US government’s deliberately aggressive family separation policy.  There are only the difficult and awful choices the situation forces on innocent people.

Beneath the malapropism that is the short film title “One Cambodian Family Please For My Pleasure” lies a wryly rueful tale of immigration and assimilation.  A.M. Lukas’ well-meaning English mangling heroine is Czechoslovakian immigrant Hanka (Emily Mortimer). (The story’s set in 1981.) As head of her church’s Assimilation Committee, she wants to sponsor a Cambodian refugee family fleeing Khmer Rouge-inflicted oppression.  This project is Hanka’s way of paying forward America’s giving her a life free of the Communist yoke. Yet Hanka’s ironically unassimilated existence in America suggests more personal reasons lie behind her request.

Viewers of the Coen Brothers classic “Fargo” will chuckle at Hanka’s attempts to sing the praises of her life in this North Dakota town.  Certainly residing in Fargo beats living in a refugee camp. Yet not worrying about starving to death soon palls compared to the sense of overwhelming isolation seemingly baked into the stones of Fargo’s buildings.

Hanka is ironically aware that her life in America has become unsatisfactory.  Her children are more familiar with Norwegian culture than Czech culture. Her Italian husband’s romantic feelings towards her have long since died away.  Yet her awareness doesn’t spur her to radically change her home situation.

In Mortimer’s hands, this married Czech isn’t pitiable, just someone who understands and empathizes with the desire to not feel isolated in a strange new land.

Cartoonist/animator Nina Paley should hopefully have her Franklin Delano Roosevelt hat on when talking about her newest feature film “Seder Masochism.”  Such a figurative chapeau will allow her to welcome and not be bothered by the outrage of believers in patriarchal religions or supporters of record companies that ferocious exploit their copyright privileges.  Everybody else will find “Seder Masochism” a generally entertaining hoot.

Paley also effectively mocks the sense of entitlement to Palestinian land embodied in the Israeli settlement movement.  “Seder Masochism” paints that entitlement as a rationalization for killing or driving out current occupants of a land and keeping it for themselves.

The film’s points are effectively made with tongue generally planted firmly in cheek.  There can be found during the film’s running time dancing goddess statues, a singing Angel of Death, and even the proverbial land of milk and honey signified by a milk bottle and a plastic honey bear.

But it’s in the repurposing of tunes ranging from old Motown hits to even a French romantic song that Paley truly shines.  These often innocuous tunes take on sinister aspects when paired with the right animation. Andy Williams’ “This Land Is Mine” turns from a celebration of Israel’s founding to a condemnation of a continual cycle of murder and slaughter for land.  The 1970s children’s song “Free To Be You And Me” turns the Exodus from Egypt into a celebration of sexist repression and mass slaughter.

Balancing Paley’s cinematic criticisms of the Jewish religion are her taped discussions with her elderly father.  Those conversations reveal the older man’s ambivalent attitude towards the Jewish religion. He wanted his children to be familiar with the religion that shaped them.  Yet he himself was far from a fervent believer. These sequences make the occasionally disapproving Mr. Paley a very human parent.

Given the recent aggressive political and cultural resurgence of patriarchy, Paley’s inventive cinematic mockery provides a much needed spiritual balm.