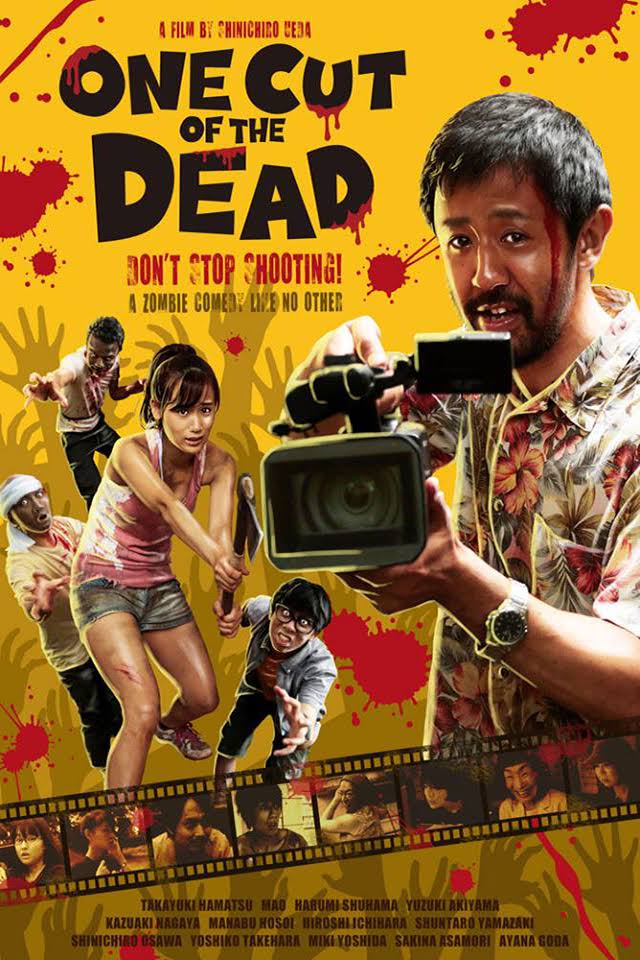 Even though the 6th Japan Film Festival of San Francisco is coming up on its final weekend, there are still some cinematic treasures to be seen.  Shinichiro Ueda’s “One Cut Of The Dead” happens to be one of those treasures. This hit indie horror comedy packs into its running time zombies, filmmaking disasters, questionable human behavior, character comedy, and a lot of screaming (not all of it from a female).

The initial set-up is very straightforward.  Higurashi and his crew have come to an abandoned water filtration plant to film a low-budget zombie movie.  However, the location for the shooting happens to be cheap because the old plant was supposedly the site for some grisly human experimentation.  Higurashi couldn’t care less at first because his lead actress can’t convincingly act. But when real zombies start appearing and the crew start fighting for their lives, the director’s happily catching the real fear displayed by his cast.

The plot description makes Ueda’s film sound like a zillion terrible low-budget horror movies.  Yet there are slightly off moments such as the wiping of a blood-spattered lens or some awkward silences and non sequiturs.

It would be utterly churlish to mention what happens next, especially given the lack of a spoiler space option.  Let’s just say there’s a very good reason why “One Cut Of The Dead” is ultimately a horror comedy which doesn’t negate the seriousness of the above plot description.  No, it has nothing to do with the terrible acting or cheap special effects.

What can be said is that Hamatsu Takayuki, who plays Higurashi, delivers a hilariously manic performance that makes the viewer wish he became a zombie snack.   Syuhama Harumi, who plays makeup lady Nao, also gives a great turn changing from the voice of reason against Higurashi’s belligerence to a hilariously profanity-laden scream as she puts down a zombie.

Are there any life lessons that can be learned from “One Cut of the Dead?”  Besides the virtue of fighting for your life when the zombies come, it’s probably the truth that the zombie crisis does show very broadly that unexpected mishaps are part and parcel of the filmmaking process.  Whether those mishaps are survivable is a different story.

There’s nothing wrong with doing a slow-moving film laden with detail.  Tsai Ming-liang, for example, has long demonstrated that such films can have incredible emotional impact.  But Yui Kyohara’s “Our House” feels like a collection of quirky details which fail to cohere into a greater whole

In a seaside town, 13 (going on 14)-year-old Seri lives with her mother Kiriko.  Her father disappeared for reasons unknown, and Kiriko’s new boyfriend has gotten Seri quietly seething.  In the same town, teenaged Toko befriends the amnesiac woman Sana and lets her stay as a guest. Yet some odd events raise questions about Toko’s benevolence.  How are these two stories connected?

Kyohara’s film attempts to unsettle the viewer without resorting to jump scares.  Yet the film never builds any sense of tension. Seri definitely behaves in sometimes malicious ways, such as deliberately spiking a guest’s wine with something unpleasant.  Toko seems creepily calm and emotionless. But the viewer never worries that either of the girls are on the edge of violence.

Certain odd events happen in isolation, without the sense of something bigger being constructed.  The playful night-time dance that opens the film never gets explained. A threatening phone call makes the viewer no wiser regarding what Toko does beyond factory work. Why Sana developed amnesia or whether Sana really is her name never gets answered.

To be fair, “Our House” has a couple of disconcerting moments involving a Christmas tree.  But such moments are overwhelmed by the boredom generated by the rest of the film’s events.

“DigiCon 6 Asia Awards: The Wonders Of Animation Shorts” is a shorts program that’s the product of a collaboration between the Japan Film Festival and DigiCon 6, an annual Asian animators competition.  Five of these award-winning offerings were made available for preview.

“Way Back To The Sea” from Kaori Iwase concerns a boy, a pet fish, and a dying old man who lives in a boat dry-docked underneath a bridge.  This moody tale captures some of the difficulties of dealing with personal loss when you’re just a child.

Tomoki Misato’s “Look At Me Only” works well thanks to its central headfake.  The film initially appears to be about a guy stuck on an unpleasant date with a very ill-tempered girlfriend.  But a small shift in perspective cleverly reveals the guy’s romantic problems stem from his own wandering eye.

Weirdest of the animated shorts previewed is Q-rais’ “I Like Ducks.”  To say the cel-drawn animation focuses on the odd day of a middle-aged man in a green suit is an understatement.  It’s seeing how the weirdness manifests itself that makes the film jaw-dropping. Of particular notice are a park rules-enforcing creature which emerges from a lake and a letter Y-obsessed man who spies on the protagonist.  At the very least, one moment may put more sensitive viewers off ever patronizing a coffee shop again.

Manabu Himeda’s “Youkosobokudesku4 – What Is ‘Youkosobokudesu’?” also uses simple animation to create a weird animated world.  The difference is that where Q-rais’ film conveys its weirdness with just images, Himeda’s film uses catchy musical sequences employing different types of singing styles.  Hopefully, subtitles will be provided with the publicly screened version of Himeda’s film. The unsubtitled copy available for preview hinted that more may be going on in the short than the visuals suggested.

“Kaiju Bath,” from Shinya Hashizume, turns out to be the standout among the previewed shorts.  Not only is the drawing impressively detailed, but it’s an entertaining and funny take on the “kaiju stomping a city” tale.  Its story elements include a communal bathhouse, a special broccoli stalk, and powerful pipe-playing.

For those unfamiliar with Japanese pop music, Perfume is Japan’s leading electro-pop trio.  “Entertainment Nippon 2018 Perfume” introduces the viewer to the group through their recent Reframe concert tour.  The 2018 concerts celebrate the 15 years the trio has been together, drawing on their previous work as raw material for finding new angles to regard their music.

What distinguishes Perfume from other groups is that they use cutting edge technology in crafting their concert performances.  The Interaction Designers at Rhizomatiks use everything from virtual shadows to coordinating two dozen aerial drones flying in unison to recording Perfume’s real time singing and heartbeats as song material.  Fears that the technological marvels on display distract concert attendees from shortcomings in Perfume’s music turn out to be unfounded. If anything, the sophisticated projections build off of Perfume’s singing and choreography.  That said, the concert number “Display,” which involves 3-D VR and projections synchronized to frames held up by Perfume’s members, looks visually astonishing.

Viewers are likely to have seen Rhizomatiks’ work before.  If they watched the Rio Olympics, the projections at the Flag Handover Ceremony was put together by Rhizomatiks.

The impressive computer-generated spectacle seen in the “Reframe” excerpts doesn’t quite cover up a couple of notable holes in the documentary.  The film never explains how Perfume decided to incorporate cutting edge technology in their shows or even offers a hint of who they are besides performers.  Using the same fan praise at both the film’s beginning and end does little to enhance Perfume’s credibility.

The documentary’s performance clips do give a decent sense of how Perfume and Rhizomatiks’ work turned out on stage.  But some viewers will doubtless prefer to see Perfume perform live.