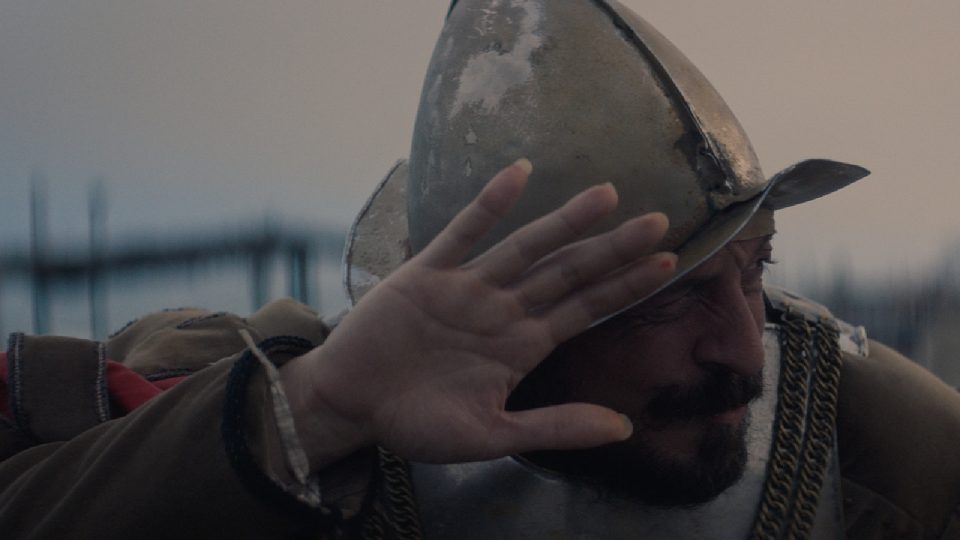 Those social forces and roles continually pressured the film’s subject in her younger days to literally “look nice, behave nicely, and avoid scandal.”  Morgana’s lack of conventional beauty made those pressures more oppressive in her case.  Living in South Australia’s Coober Pedy (the Opal Capital of the World) and the conservative Western Australian suburb of Albury, she eventually existed as a typical middle-aged Australian housewife.  Neither town did much to nurture curiosity about different if socially unacceptable ways of living.  From what the film shows of Albury, a sense of slow spiritual death seems baked into the town’s very stones.

Muses to her credit did eventually realize that her respectable marriage wouldn’t work out.  However, that understanding didn’t come soon enough for her to prevent her sense of worthlessness to translate into a serious contemplation of suicide.

What wound up saving the future filmmaker was her decision to hire male escort Kevin Oh for an evening’s companionship.  From this distance, the touching, intimacy, and conversation Oh provided to his middle-aged client damns by intimation the emotional aridness of Muses’ supposedly socially acceptable marriage.  The experience showed Muses that craving touching and intimacy was not a sign of personal weakness.  Indeed, wanting more of these emotional experiences was a very human need.

Muses’ growing confidence and artistic success led her to eventually move to Berlin and reinvent herself.  Seeing Morgana discover her found family and finding new ways to enjoy life proves a cheery and liberating experience to watch.

It’s not terribly surprising that Muses’ respectability-obsessed biological family would disown her.  But what truly hurts the viewer sympathetic to Morgana’s life struggles is seeing the heartbreak in her face after she unwillingly leaves the edenic Berlin to return to the spiritual hell of Albury.  The re-emergence of the self-doubt she had supposedly left behind proves particularly worrisome.

If S.F. Indie Fest had an award for Best Fictional Lousy Decision Maker, the protagonist of Edward Morris’ drama “How To Stop a Recurring Dream,” would merit at least an award  nomination.  Over the course of the film, she makes so many dodgy and even terrible decisions that the viewer is tempted to write her off.  But as is often said in the courtroom, there are extenuating circumstances.

Yakira (Ruby Barker, “Bridgerton”) kidnaps her sleeping 12-year-old stepsister Kelly and steals the family car.  The older girl hopes to forge a sisterly bond with her younger sibling before her father follows through on his plans to get a separation and move himself and Yakira to a different part of the country.  However, Kelly hasn’t forgotten or forgiven her stepsister’s long history of irresponsible behavior.  Forcibly locking someone prone to anxiety in a car trunk definitely won’t provide the basis for a kumbaya moment.

The reasons for Yakira’s actions slowly get revealed over the course of the film.  They involve the titular recurring dream, one with personal significance for the troubled teen.  But once the viewer learns those reasons, it raises a host of other troubling questions the film doesn’t really answer.  For example, the relationship between Yakira and her stepmother doesn’t seem to change all that much over the course of the film.  Even at the film’s climactic moment, the stepmother is nowhere to be seen.

From a visual standpoint, Morris’ film shows some impressive touches.  The film’s titles display a nice dreamlike quality.  The frantic flight away from a gas station and Yakira’s frantic run through the forest deliver the right degree of chaotic suspense.

However, “How To Stop A Recurring Dream” ultimately lost this viewer’s goodwill by its inability to rise above triteness.  Its dream symbology might as well have come from the pen of hack script writer O.B. Vious-Ness.  Maybe Morris’ film might have been more interesting if Kelly’s own anxiety issues had been examined as well.

Takeshi Kushida’s drama “Woman of the Photographs” tackles self-image and truth in an age of digital retouching.  But its reliance on familiar sexist dramatic tropes overshadows any insights it may offer.

Former ballet dancer Kyoko has become a social media celebrity (and is the titular character).  Normally, her path would not cross with that of small-time misogynistic professional photographer Kai.  An accidental meeting in the forest leads to Kyoko relying on Kai’s digital retouching skills to maintain her social media presence.  But what happens when Kyoko wants more from Kai than his removing her very visible scars from her photographs?

The evolution of Kyoko’s relationship with Kai offers an occasional moment of pleasure.  Kai’s determination to avoid physical contact with Kyoko goes to the ludicrous point of his handling a toothbrush used by Kyoko as if it were toxic waste.  Kyoko’s late night dance to the music played over a shopping mall’s PA system momentarily lifts the film’s energy.

This viewer goodwill starts getting lost thanks to the film’s backstory sketchiness.  Kai’s refusal to speak for most of the film can’t be ascribed solely to a dislike of women as he doesn’t say a word to an old male friend either.  But the film’s bigger problem is its keeping Kyoko as a character whose only definition comes from being admired by men.  Her professional dance career is apparently cherished more for the applause she received from men than pride in her display of skill.  It’s never clear if her chest and face scars were the product of a serious accident or self-harm.  And while a good sense is given of the home lives of the two main male characters, the viewer only has a vague sense that Kyoko is apparently not homeless.  Her own personal living space remains a mystery.

Unsurprisingly, what ultimately undoes “Woman of the Photographs” is its hard embrace of sexist stereotyping.  Neither of the film’s two main female characters come off looking personally unique.  A frequent customer of Kai’s repeatedly asks for alterations to her photographs in hopes of transforming her plain looks into marriage-worthy material.   Kyoko’s relationship with Kai does nothing to distinguish itself from the “hot young woman and middle-aged man” dramatic trope.  Kai’s relationship with a pet praying mantis ultimately becomes an obvious metaphor for whatever feelings he develops towards Kyoko.

The ex-dancer’s obsession with her scars never rises to the level of grotesque beauty.  That’s a shame as such an obsession might have begun to save the film from its terminal mediocrity.

A popular claim among certain types of right-wingers is that colonialism overall benefited the Third World peoples subjected to its yoke.   The implication of such a claim is that the withdrawal of European influence led to the present day decline of a former subject country.  Taking serious issue with that claim is the new film from this year’s recipient of the IndieFest Non-Fiction Vanguard Award, Rodrigo Reyes.  “499,” the title of Reyes’ new film, punctures such pro-colonialist attitudes thanks to a strong dose of magic realism.  The result is one of this year’s Indie Fest’s must-see films.

The odd title refers to the number of years between the Spanish overthrow of the Aztec Empire and present day Mexico.  Giving centuries old colonialism flesh and form in the film is a nameless conquistador who took part in overthrowing the Aztecs.

Yet Reyes is not interested in re-enacting that ancient conquest.  His film’s conquistador is washed up alone onto the shores of present-day Mexico.  He thinks he’s wandering the length and breadth of Mexico to somehow find a way back to his own time.  But in reality, the conquistador’s wanderings expose him to the legacy of what he and his greedy treasure-seeking compatriots brought to Mexico.

What makes “499” more of a documentary than a fictional film is who the conquistador encounters on his travels.  The man who talks about his journalist activist father being literally cut into pieces or the refugee forced to leave his regular job to claim asylum in America are among the real life people relating their stories to the camera.  Ironically, hearing the grieving mother Lorena talk about the rape and murder of her 12-year-old daughter Fatima will make the viewer wish her story was a work of fiction rather than an extremely brutal actual crime.

What becomes repeatedly clear from the conquistador’s wanderings is that the players’ names may have changed, but the social forces they represent have not.  The vicious terror tactics of MS-13 aren’t that far removed from the brutalities the Spanish invaders inflicted to subjugate the native population.  Traveling to a distant land to better one’s lot in life has gone from sailing the Atlantic Ocean to risking death or injury to hop aboard the freight train known as The Beast for a shot at a somewhat better life in America.

Reyes subtly ridicules the out-of-step nature of the history represented by the nameless conquistador.  His “join the Catholic church or die” speech to a group of indigenous school children feels ludicrously out of step given that he doesn’t realize the kids already attend what appears to be a church-sponsored school.  The conquistador’s sword feels pathetic next to the .357 and the .44 a masked cop shows the time-lost wanderer.  The permanent loss of speech that afflicts the conquistador ironically turns out to be a benefit as it forces him to pay attention to and reflect on the stories being told by the people he encounters.

Another irony of the nameless conquistador’s wanderings comes from the huge gap between what he desires and what he actually finds.  Instead of discovering wealth to steal, he finds only homeless shelters and very tall landfills.  The closest he comes to fulfilling his former dreams of instant wealth is encountering the crumbling ruins of an old Aztec temple.

“499”’s conquistador eventually realizes he’s no longer the master of his own destiny.  A knee crawl to appeal to the Virgin Mary’s mercy proves less fruitful than he’d wanted.

Reyes admittedly gives the conquistador an El Dorado to ultimately reside in.  But the form that fabled land of fortune takes feels more in line with the hardscrabble existence of the modern Mexicans this time-lost character encounters on his travels.

(“Morgana,” “How To Stop A Recurring Dream,” “Woman of the Photographs,” and “499” are now available for viewing as part of the online edition of Indie Fest.  The festival runs from February 4 to 21, 2021.  For tickets and more information about these films, go to https://sfindiefest2021.eventive.org/films .)