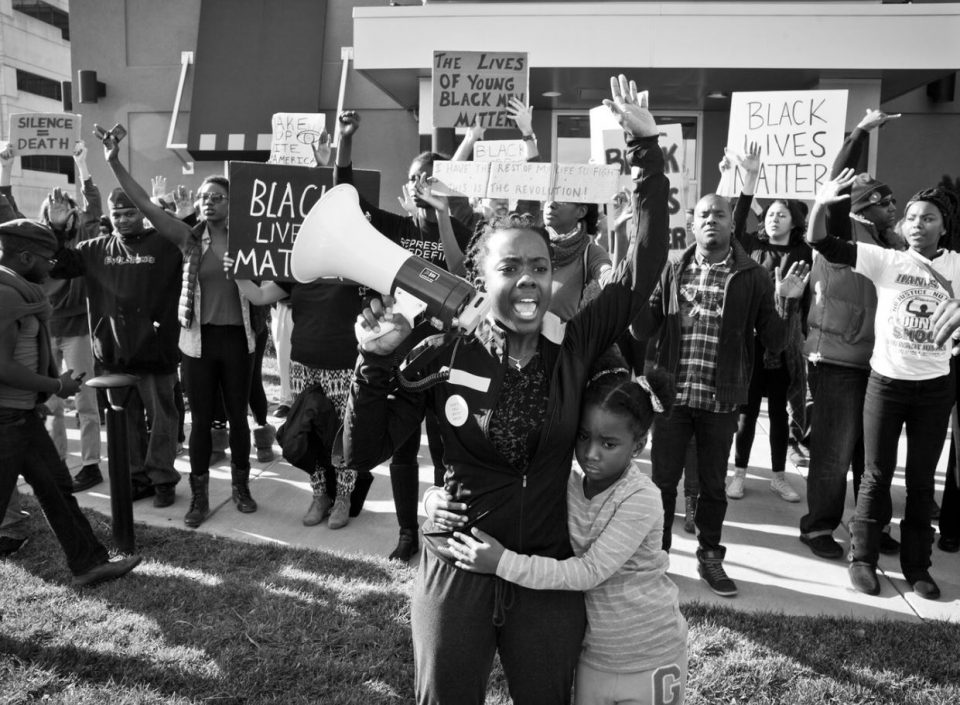 Romance stories get a quietly revolutionary overhaul in Terence Nance’s dramatic short “Univtellin.”  Its Marseilles-set tale of the affair of two French Africans (a mechanic and a hair-dresser) nicely ridicules both dating advice and cinematic relationship cliches.  But the short’s opening and closing images turns “Univtellin” into a disturbing tragic sheen on the “two people as one” concept of coupledom.

Did the events in Nathan Truesdell’s “Balloonfest” actually occur?  This low-fi video chronicles a supposed 1986 effort by the city of Cleveland to earn a Guinness Book of World Records spot through the simultaneous release of 1.5 million balloons into the air.  It’s likely as faking this event feels improbable for a short film.  Yet what is certain is that Truesdell’s short fails to make the case for viewer empathy or understanding of this mass effort.

In “Happy Birthday Mario Woods,” director Mohammad Gorjestani follows Bayview mother Gwen Woods as she faces her titular son’s first post-death birthday.  Mario Woods was shot 21 times in a homicide by cop incident.  While there are plenty of moments where Gorjestani captures Gwen Woods’ grief, the film also shows how Mario’s mother finds the strength to not let her son’s memory be erased by San Francisco police violence.

The South Korean short “Break Of Day” does center around an illicit assignation in a motel room.  But director Kyongju Kim keeps the reason for that assignation unstated until later.  Trust both earned and unearned turns out to be the heart of this short matter-of-fact drama.  Kim’s story does cross the cultural barrier and will be understood by American women in the protagonist’s situation.

Joe Talbot’s “American Paradise” delivers “Shorts 2”’s comic highlight.  A conversation among a trio of black fisherman turns into recounting the story of a white guy named Al who decides to rob a bank.  The robbery and the unexpected complication of Al’s method of thievery yield much comic gold.  Not only does police brutality get lampooned, but one well-known “Mission: Impossible” plot device may never be taken seriously again.

Lisa Ostberg’s “Meaningless Conversations in Beautiful Environments” turns out to be “Shorts 2”’s only misstep.  The central joke of juxtaposing images of breathtaking natural beauty with banal conversations about electronic device passwords doesn’t improve with repetition.

Yuri Ancarani’s documentary “The Challenge” may possess a prosaic title.  Yet this visually rich film resembles a photographic monograph come to stunning life.

Ancarani’s film follows a Qatar-set falconry competition over three years.  Competing falcons have to bring down a pigeon as quickly as possible.  This centuries-old sport thrives in the modern age thanks to modern day advances in video equipment.

“The Challenge”’s repeatedly arresting images may be the product of years of cinematic observation.  But viewers needing identifiable subjects to follow to make a documentary watchable will be frustrated with Ancarani’s film.  For those willing to immerse themselves in the world of this elite sport, this documentary delivers many rewarding sights.

There are too many ravishing images in Ancarani’s film to enumerate.  A particular favorite is a side shot of a desert-set Jumbotron that makes the giant television set resemble the mysterious black monolith seen in “2001: A Space Odyssey”’s famous Dawn of Man sequence.  Other memorable images include a literal gold-plated Harley Davidson, a close-up of a communal meal that makes its diners resemble falcons, and sheikhs’ tents that make American glamping facilities look like chain motel outlets.

But the film’s most arresting images come from its falcon cam sequences, where the viewer gets a falcon’s eye view of the world.  The dizzying visual shifts will remind viewers of someone displaying extreme ADHD.  Yet the bird’s constant shifting of attention is a primary tool in its hunting effectiveness.

The falcon cam is just one instance of how modern technology has allowed the centuries old sport to thrive in the present day.  Instead of undermining the enjoyment of falconry, modern technology has brought a new dimension to pursuing the sport.  Examples of these new wrinkles include a private plane outfitted with perches for half-a-dozen falcons, as well as long-distance participation in an auction for a falcon.

Even with the 21st century wrinkles, a couple of truths about Qatar’s falconry competition are evident.  First, the sport’s still a rich man’s hobby.  The victor in the falcon auction wins his new bird by paying about $24,000 (US dollars).  Second, the sport still appears to be a stag contest.  The only females seen in the film are the competing falcons.

The constantly ravishing imagery of “The Challenge” makes watching this film a striking cinematic experience.

American Western films, particularly John Ford’s “The Searchers,” may have influenced Zacharias Kunuk’s “Maliglutit (Searchers).”   But Western genre fans expecting a Ford film with all-Inuktitut dialogue will be disappointed.  The ethical issues at play in Kunuk’s film differ from the American fetish for rugged individualism.  Physical conflict proves less important than fights expected from American Westerns.  “The Fast Runner” director’s new film should be regarded as cinematic fusion cuisine.  Some Western tropes are mixed with Inuk culture to create something unique.

A reliance on incident-filled plot is not one of those Western tropes. Aulla and Kupak’s kidnapping of Kuanana’s wife Tagaq and daughter Siku may propel the film’s main story.  Yet there’s never a sense of tension to Kunuk’s depiction of Kuanana’s pursuit.  Even before the kidnapping occurs, more onscreen attention is paid to the daily struggle for survival of the lead character’s family.

The real struggle in the film pits selfishness against community reliance as key to surviving the harsh frozen environment.  Aulla’s refusal to share food symbolizes his prioritizing his survival and that of his friends over that of the tribe.  His advances on the wives of other men show his willingness to twist the ethos of communal sharing in unacceptable ways.  In the world of “Maliglutit,” American Westerns’ rugged individualism is just the flip side of Aulla’s selfishness.

Kunuk’s other divergence from American Western mores is his avoidance of glorifying man’s conquest of nature.  Nunanaq’s ability to pursue Alla and his gang doesn’t primarily rely on personal tracking skills.  Instead, it is his calling on the loon spirit that helps guide the hunter and his son in the right direction.

Kunuk’s camera may not treat its snowy and icy environment as an opportunity for picture postcard shots.  But what it does convey repeatedly very well is the fragility of the Inuk’s ability to survive in this cold environment.  Close-ups of the communal lodge get balanced by a long shot of the lodge’s exterior that makes its social comforts feel tiny.  Even the climactic confrontation between Kuanana and Aulla looks minor compared to the snow-covered mountains that dwarf the two antagonists.

“Maliglutit,” with its different takes on traditional Western themes, may be too dissonant for American audiences.  But at least its ultimate point about staying emotionally strong in apparently hopeless situations is something all audiences can agree on.

Indonesian martial arts action film “Headshot” is filled with balls to the wall fight sequences that a viewer can expect to be ripped off by lesser Hollywood films.  This should not be surprising because the film’s fight choreography is credited to Uwais Team.  Yes, that’s Uwais as in “The Raid” star Iko Uwais, who plays the lead character in this film.

That character is named Ishmael by pretty doctor Ailin.  She dubs him such because she’s a Melville fan and Uwais’ amnesiac character possesses only fragmented memories of his past.  Notorious crime boss Mr. Lee, though, does know who Ishmael really is and wants to kill him.  While Ishmael struggles to remember his dark past with Mr. Lee, that same past may cause Ailin to abandon him.

“Headshot” is filled with such violently brutal moments as an unfortunate victim getting his head impaled by a machete.  What makes Kimo Stamboel and Timo Tjahjanto’s actioner more than a glorified snuff film are two important elements.  Ishmael’s struggle to recover his lost past is in part a journey to discover whether he really is a monster at heart.  Equally importantly, the fight choreography never feels repetitive or recycled.  The fight venues range from a bus aisle to a forest.  Lee’s tougher gang members display individually lethal talents using everything from a knife to a telescoping steel rod.

The cuts and other visible injuries that Ishmael receives over “Headshot”’s course will not inspire viewers to imitate its violence.  Showing that Ishmael gets noticeably hurt over the course of the film will act as a disincentive to re-enacters.  The numerous visible hits to the head that Ishmael takes will provoke wincing about long-term brain damage.

For action film fans, “Headshot” is definitely worth taking a shot and watching it.