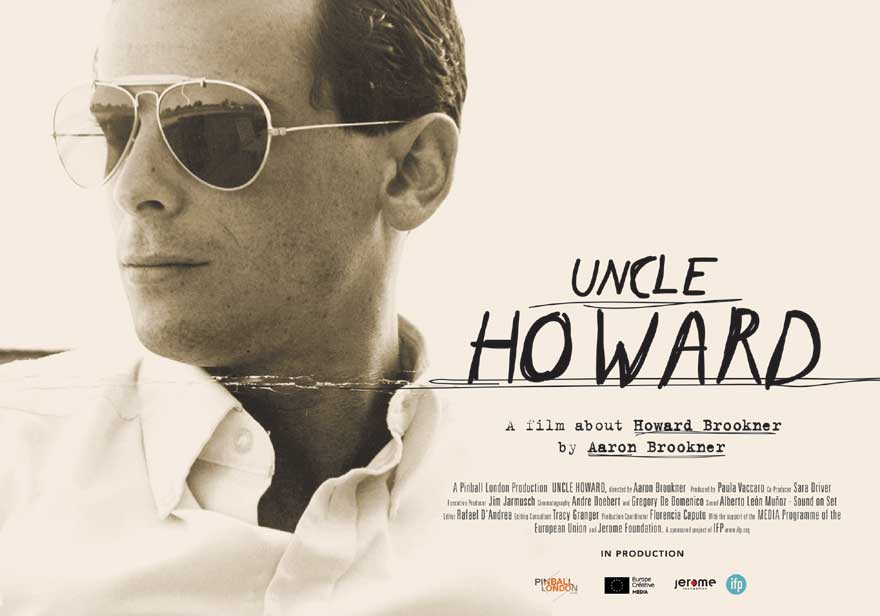 Aaron Brookner’s documentary “Uncle Howard” is both a love letter and a tribute to a dead but talented man.

Howard Brookner packed an incredible amount of experience into a life that went beyond the Burroughs documentary.  One of the joys of Aaron Brookner’s film is seeing him discover and cherish new details of his gay uncle’s life.  A reverential discovery of unused material from “Burroughs” is just one of the treasures discovered in the film.  Some of the finds made by Aaron are personal, such as a raucous picture of Howard Brookner and John Waters in a Japanese gay bar.  But the biggest discovery is finding Howard’s completed documentary on theater director Robert Wilson and his doomed project “The Civil Wars.”

Can one feature film on which Brookner didn’t appear to get final cut plus two documentaries suffice to declare Howard Brookner’s potential greatness?  “Burroughs: The Movie” had been regarded for years as a lost cinematic treasure.  The Robert Wilson documentary excerpts had tantalizing hints of an amazing subject.  The making-of material on “Bloodhounds Of Broadway” didn’t show Howard as someone overwhelmed by the challenges of Hollywood filmmaking.   Potential greatness is thus a fair assessment.

Interviews with director Jim Jarmusch and an encounter with Andy Warhol hints at the circles Howard travelled in.  But reminiscences by Aaron, Howard’s ex-lovers, and his dear friends do a better job of capturing the pain of his absence.  Preserving those memories in the medium Howard loved to work in will help ensure his continued life.

“Suicide Kale” does not concern self-harming vegetables.  Instead, Carly Usdin’s flawed but still watchable dark comedy offers some insights about relationships in a left-of-center manner.

Month-old couple Jasmine and Penny still has kinks in their relationship.  A lunch party with Jordan and Billie, who are living a perfect lesbian dream life, is a chance for Jasmine to introduce Penny to a couple of her friends.  Things turn sour when an attempted quickie by Jasmine and Penny turns up what looks like a suicide note written by one of their hosts.    The new couple tries to identify the note’s author without spoiling lunch, but that plan hilariously falls through.

The film’s real focus is actually on illuminating the underlying tensions in both couples’ relationships.  Jasmine doesn’t know if Penny’s finally ready to commit to a relationship.  Meanwhile, it’s very unclear whether Billie’s arguments over such things as Jordan’s refusal to wear an apron are minor matters or symptoms of something worse.

Nice quips such as one about self-catfishing keeps the lunch party rolling.  But the biggest joke is that while each couple considers the other couple as having problems, they’re blind to their own difficulties.

Usdin’s film succeeds as a vehicle for letting its four party-goers take their lunchtime conversation into such weird directions as the ethics of lusting after a table formerly owned by a neighbor who died in a hot tub.  However, her visual storytelling skills need work.  The shots generally fall a little short on adding to the tension of the conversations.  Otherwise, “Suicide Kale” has moments both painful and fun to entertain the viewer.

Catherine Corsini’s moving and sensual “Summertime” dramatizes liberation both political and emotional in 1971 France.  When closeted lesbian farm girl Delphine (Izia Higelin) joins a women’s liberation group, she soon falls in love with group firebrand Carole (Cecile de France).  But both women soon discover a different level of courage is needed for them to stay together.  Strong performances from both Higelin and de France plus beautiful footage of France’s Massif Central region create an utterly gripping and touching tale.

Life-threatening medical bureaucracy and HIV+ survival may seem odd elements for a comedy.  But Tom E. Brown’s film “Pushing Dead” entertainingly melds these elements together with a love for the non-gentrified San Francisco.

Brown repeatedly and effectively uses absurdity to make his film’s tragic realities bearable.  Of particular note is a medication taking sequence with Dan and Bob that turns into an absurd contest.

Aside from the excellence of the ensemble cast, frequent shots of less touristy San Francisco streets and locales captures the city’s off-kilter charm.  They also make filmmakers who substitute Vancouver’s streets for the City by the Bay look even more contemptible.

Ultimately grounding the film are Dan’s sympathetic frustrations.  Both AIDS survivor’s guilt and emotional blockage weigh on his spirit.

Brown does ultimately give his characters hope without schmaltz.  The kindnesses rendered to others wind up providing redemption amidst the insanity.