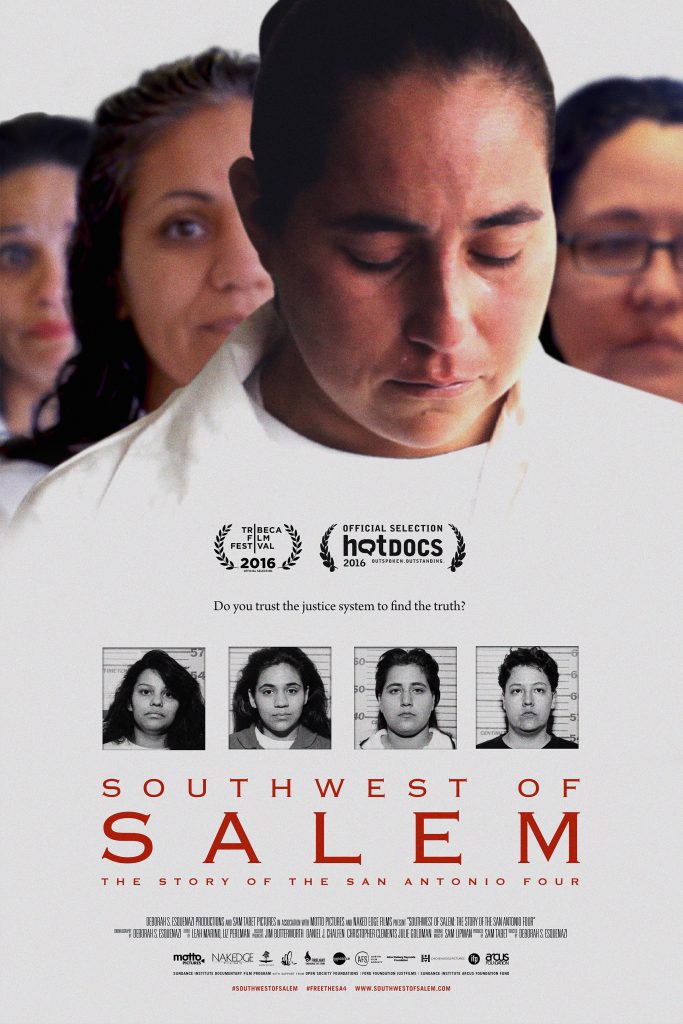 Despite the film’s title “You’ll Never Be Alone,” lead characters Juan and Pablo wind up physically or socially isolated.  From workaholic abandonment to being stuck in a hospital bed, the protagonists of Alex Anwandter’s film are repeatedly left alone to solve their predicaments.  Their solutions wind up being non-solutions.

An actual gay-bashing incident may have inspired Anwandter’s film.  But the visceral brutality of the beating doesn’t get matched by either dramatically cathartic violence or even Juan’s heightened awareness of his situation.  Sergio Hernandez’ Juan delivers a satisfying slow burn, but the dampness of his emotional explosion never feels dramatically adequate.

Seeing people recover from the act of a particularly malicious God provides good dramatic fodder.  What Juan eventually does, though, comes across as a nihilistic act rather than an attempt to right two lives badly thrown out of balance.

“Southwest Of Salem: The Story of the San Antonio Four,” by contrast, delivers a heartbreaking account of real-life injustice.  Deborah Esquenazi’s disturbing and infuriating film offers a cautionary tale about welding hysteria to the criminal justice system.

The hysteria in this case came from the Satanic ritual abuse panic of the 1990s.  Caught in the panic’s last gasps were four teenage Latina lesbians.  This quartet got sent to prison for supposedly raping a pair of little girls.  However, as Esquenazi shows from trial transcripts, these four friends were condemned by Texas’ criminal justice system for being lesbians.

“Southwest Of Salem”’s strongest impressions come from seeing the negative consequences of letting mass hysteria influence perceptions of guilt.  Objectively viewed, the so-called evidence of child abuse and rape is non-existent.  Yet that’s cold comfort to these four lesbians, who’ve lost a dozen years of their lives to false charges.

The jealous homophobic man whose actions ruined the lives of these four women will probably never be punished.  However, concerned viewers can pressure the Bexar County District Attorney for example to support exonerating the San Antonio Four so they can finally begin to rebuild their lives.

JJ Garvine and Tai Parquet’s documentary “Film Hawk” delivers a highly entertaining portrait of a man whose taste and wisdom helped shape American independent film.  Without Hawk’s sharp eye, such filmmakers as Ira Sachs and Barbara Hammer might not have eventually broken out.  Hawk’s prescience regarding “The Times Of Harvey Milk” alone is enough to earn him a statue in the Hall of Cinematic Menschdom.

Filmmakers who’ve met and/or been guided by Hawk’s wisdom pop up frequently in “Film Hawk.”  The most unforgettable of these filmmakers is Smith, whose opening anecdote suggests a debt that can never be fully repaid.  Viewers, though, might have benefitted from hearing excerpts from some of Hawk’s notes on films for which he provided consultations.

The other shortcoming of Garvine and Parquet’s film is its leaving unanswered how Hawk transitioned from being a lover of Broadway theater to becoming a film consultant.  Fortunately, the filmmakers avoid hagiography by focusing on Hawk’s friction with his sports-loving brother.  Questions about the financial viability of Hawk’s consulting business are also raised.

Its subject’s humility aside, “Film Hawk” is one of those entertaining films which would be improved by adding a bit more background material.  But even with what’s presented, cinephiles will enjoy this introduction to American independent cinema’s fairy godfather.

A prior Olivier Ducastel and Jacques Martineau film, “Born In ’68,” took place over decades and swept into its scope political changes occurring in France.  The time frame of their charming and touching new film “Paris 05:59: Theo & Hugo” covers about an hour and a half.  The subjects of the conversation that takes place between the titular couple cover less portentous issues.  They include the virtues of Balzac and the mark left on your living space.

The end game of Ducastel and Martineau’s film is whether these two gay men will become a couple.  In other words, will Theo and Hugo walk into “the jail that will set you free?”  The answer comes in a manner that suggests a mix of “Cleo From 5 To 7” and “Before Sunrise.”

Theo and Hugo met when they were both naked.  Yet it is the conversation they have walking the night-time Paris streets that slowly unclothes their personalities.  One man is cagey while the other is neurotic about HIV exposure.

The film may be a countdown to 5:59 AM.  But it’s also an enchanting tour through Paris at night.

(“Political Animals” will eventually be commercially released.  “Girls Lost” has been picked up for American distribution by Wolfe Video.  “Paris 05:59 – Theo And Hugo” plays at 9:15 PM on June 23, 2016 at the Castro Theatre (429 Castro, SF).  The previously reviewed “Pushing Dead” gets an additional screening at 9:15 PM on June 25, 2016 at the Victoria Theatre (2961 – 16th Street, SF).  For further information about the films and advance ticket orders, go to www.frameline.org .)