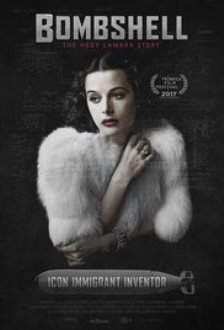 Actress Hedy Lamarr should also have been publicly recognized for her inventive genius.  Instead, personal naivete and institutionalized sexism led to Lamarr’s ending in far less glorious circumstances.  Alexandra Dean’s quietly tragic documentary “Bombshell: The Hedy Lamarr Story” shows how Lamarr’s real talents were never properly recognized by many peers.  Lamarr’s male contemporaries generally presumed her physical beauty was the sum total of her talents and shaped her movie career along those lines.  Yet Dean shows how Lamarr’s talent for theoretical invention and mechanics would lead to development of the technology that would form the basis for Bluetooth and wi-fi.

The Armenian Genocide shares with Lamarr’s life the problem of being a forgotten and even untold story.  But it’s highly doubtful that Lamarr had to deal with government-sponsored denialism over an actual historic occurrence.  Fortunately, Joe Berlinger, this year’s recipient of the S.F. Jewish Film Festival’s Freedom of Expression Award, has devoted his new documentary to this shameful century-old state-sponsored crime.

“Intent To Destroy,” the title of Berlinger’s new film, derives its title from one of the conditions required for a government’s actions to be classed as genocide.   Under the cover of its entry into World War One on the German side, the shrinking Ottoman Empire surgically exterminated the Armenian citizens living in its midst.

Berlinger recounts this shameful history through following director Terry George (“Hotel Rwanda”) as he directs his new film “The Promise.”  It stars Christian Bale and Oscar Isaac as two men caught up in the political madness leading to the Armenian Genocide.

Scenes from “The Promise” show how George doesn’t trivialize the awfulness of this 1915 state-sponsored crime.  Actual period photographs provide reference points for the film’s recreations and dramatizations.  In one excerpt, a horrified Isaac sees a railroad cattle car is packed with Armenian men and women.  The thirsty Armenians greedily swallow drops of rain.  No wonder Hitler cited the Armenian Genocide as his model for the Shoah.

“The Promise” turns out to be the first mainstream Hollywood movie about the Armenian Genocide to reach the filming stage.  Turkish government pressure and U.S. State Department objections prevented an adaptation of Franz Werfel’s “The Forty Days Of Musa Dagh” from being made for several decades.

Then again, Hollywood has not been the only American institution to knuckle under to Turkish pressure to sweep this historic crime under the proverbial rug.  PBS “coincidentally” followed a documentary on the Armenian Genocide with a panel discussion filled with genocide deniers.  The U.S. State Department sternly urged its ambassador to Armenia to not contradict U.S. government silence on that World War One-era crime.

Professional climate change deniers would be in awe of the campaign employed by the Turkish government to cover up the genocide.  Academic defenders of the Turks cite anti-Muslim prejudice and the alleged lack of uniqueness of the Armenians’ wartime situation.  The most ludicrous rationalization mentioned in the film is that genocide didn’t happen because the killings occurred before the concept of genocide was created.  By the same logic, Cain should not be condemned for killing his brother Abel because the concept of murder didn’t exist at the time.

“Intent To Destroy” lets viewers speculate on the roots of Turkish denialism regarding its role in the Armenian Genocide.  It may be nationalistic pride.  It may be anti-Armenian prejudice.  It could even be disbelief at the concept that the government of the country you love could have sanctioned acts that resulted in the deaths of 1.5 million people.

What is depressingly clear is that Western realpolitik means helping whatever Turkish government is in power keep silent about the Armenian Genocide.  For Western interests, Turkey is the 800-pound gorilla in Middle East planning.  The country’s ideally situated geographically to allow for U.S. military actions against Russia, Afghanistan, and Iran.  The European Union sees Turkey as a choke point for controlling refugee access to Western Europe.  This means Turkish threats to either not cooperate or ally itself with hostile powers suffice to keep the West in its place.

Current Turkish President Recep Tayyip Erdogan is continuing the pattern of Turkish governmental denial.  A headline shown late in Berlinger’s film mentions that a German Parliament vote to recognize the Armenian Genocide led to Erdogan’s recalling Turkey’s ambassador to Germany in retaliation.   But Erdogan and other Turks can’t hide from the reality that the Armenian Genocide wiped out about 75% of Turkey’s Armenians and an account must be made.

Can making dark humorous art counter the Holocaust’s horrors?  For Hinda, the subject of Hinda Kissinger’s short film “Hinda and Her Sisterrrz,” her answer is yes.

The disconnect between artist and artwork will disconcert viewers.  Titular artist subject Hinda looks like a prim 50-ish aunt.  Yet her painting series “The Rosen Resisterrrz” shows a group of very crass elderly Jewish women happily attacking the Nazis.

Hinda’s creative process demonstrates there is no one right way of processing the horrors of the Holocaust.  The paintings began as a memorial for Straszow-based family members lost in the Shoah.  Straszow, a small Polish village, went from half-gentile half-Jew to practically all gentile thanks to the Nazi extermination campaign.   Hinda’s unsatisfying initial works looked washed out and colorless.

Only after recasting her artistic subjects as active resisters rather than victims did Hinda find the emotional connection she needed for her pieces.  Hinda’s subjects, the fictional Rosen Sisters, were a sextet of elderly Jewish women having fun fighting back against the Nazis.  Think artist Drew Friedman making Quentin Tarantino’s titular “Inglorious Basterds” all women.

Despite the grinning and coarse puns, Hinda’s Rosen Resisterrrz paintings are neither trivializing nor flippant.  They reflect her accommodating the reality of a horrible crime.  By the short’s end, Hinda’s paintings help her gain both closure and a chance to artistically start fresh.

“Death In The Terminal” is Tali Shemesh and Asaf Sudri’s documentary investigation of a terrorist attack.  On October 18, 2015 around 7:29 PM, a terrorist shooting broke out at Be’ersheba Bus Terminal in Israel.  In the course of eighteen fateful minutes, three people would wind up dead: an Israeli soldier, the Bedouin shooter, and an unarmed Eritrean refugee.  What exactly happened during those eighteen minutes of bedlam is the subject of Shemesh and Sudri’s film.

To help the viewers make sense of the events, the filmmakers rely on extensive footage from the Be’ersheba terminal security cameras and interviews with certain people seen in the footage.  These individuals include an off-duty soldier, a woman who used what medical training she had to render emergency first aid, and a young man traveling to a kibbutz.  The last of these interviewees would play a critical role in the tragedy.

The clinical structure of the film manages to bring a sense of order to what must have been chaos that evening in the terminal.  The opening of the film excellently captures that feeling well.  Images of people using the terminal’s ATM and sounds of a Mediterranean music broadcast lull the viewer into thinking this is just an ordinary evening.  When the first shots ring out, their echoes make them sound like small explosions.

As the chaotic events are slowly recounted, there soon emerges a disturbing sense that police and other security personnel may have over-reacted in their response.  The first hints come early with soldier Daniel Harush suddenly getting shot despite identifying himself as an Israeli soldier to a police officer.

But it’s with what happened to Eritrean refugee Habtom Zarhum that this suspicion of police over-reaction crystallizes.  Zarhum gets shot as a suspected terrorist despite footage showing him walking crablike across the terminal floor in slippers mere moments earlier.  Claims that this refugee  might be armed or might be a suicide bomber are contradicted by such images as Zarhum’s  trying to keep his hands raised, the security personnel’s failure to do even a cursory search for weapons, and Zarhum’s very empty hands.

Shemesh and Sudri ultimately challenge the viewer to consider if their behavior would have been different from those of the film’s interviewees.  Would a viewer have given the police and security personnel free reign and stayed out of their way?  Would a viewer have the self-confidence to intervene when things got out of hand with the treatment of Zarhum?  How the viewer feels by the time the film reveals the aftermath of that night will hopefully spur necessary reflection.

This year marks 50 years since the occurrence of the Six Day War.  Rafi Bukai’s seriocomic “Avanti Popolo” seems an odd choice to remember that decisive Israeli victory given its mix of comedy and tragedy as well as its dramatic approach.

To say Bukai’s film is set during the Six Day War is literally true.  But “Avanti Popolo” begins during the last hour before the war’s end.  Furthermore, though Israeli soldiers and even a UN officer can be seen throughout the film, the viewpoint characters are two Egyptian grunts, Haled and Gassan.   Deciding to check out of the fighting early, the two Egyptian soldiers travel through the Sinai Desert in hopes of reaching their own lines or even surrendering to the Israeli army.

Several big problems complicate Haled and Gassan’s journey.  First, they don’t have any water and they only have a vague sense of their destination.  Second, the war may now be over, but it’s not clear that any Israeli soldiers they encounter would not shoot them for fun.  Finally, a major consequence of Israel’s recent military victory is that the Sinai Desert is now Israeli territory.   Again, it’s uncertain whether the two Egyptians would get even a sympathetic reception.  But since neither Haled nor Gassan has any other options, they must trust to luck.

Bukai renders the story of Haled and Gassan’s journey as a series of comic misadventures rather than a heavily plotted tale.  The living people they do encounter, such as a news-seeking war reporter and a bored Israeli patrol, treat them as objects to such ends as creating a news story or amusingly scaring the Egyptian soldiers.  Even the Israeli patrol Haled and Gassan spends the night with tolerates the duo only because of the Egyptian soldiers’ persistent shadowing.

One of “Avanti Popolo”’s tragic ironies is that Haled and Gassan don’t really bond with their former enemies.  Haled’s rendition of Shylock’s famed monologue from “The Merchant Of Venice” seems received in a “he’s too lame to be dangerous” way.  The playing of “Avanti Popolo” on a transistor radio ironically creates an illusion of socially marching forward together that ends with the song.  An Egyptian soldier’s release of a cute bunny rabbit gets slammed for denying the Israeli soldiers some decent dinner meat.

Part of “Avanti Popolo”’s veneration in Israel has been its humanizing of former fictional enemies.  Gassan comes off as a dreamer who thinks he can leverage a dead comrade’s farewell note into a relationship with the dead comrade’s sexy girlfriend.  Haled wants to work as an actor, but he regularly gets typecast as a Jew.  Of the two lead actors, Salim Dau’s Haled leaves the stronger impression.

“Forward people” may be the literal translation of the title of Bukai’s film.  Yet as the viewer sees Gassan and Haled’s various misadventures, a strong sense permeates the film that all of the characters are walking in a continual loop of repeating their often futile behavior.