Review: Choice – Then and Now 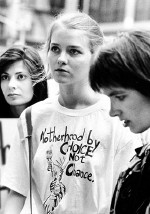 “Choice — Then and Now” is the umbrella title for three documentaries compellingly portraying a particularly toxic expression of American misogyny. Local filmmaker Dorothy Fadiman traces America’s abortion access history in these Oscar‑nominated and Emmy Award‑winning documentaries. They follow both the struggle to make abortion safe and the unrelenting terrorism which hollows out abortion access. Dr. George Tiller’s murder, among other recent developments, has been incorporated into the films.

(This writer has worked on defeating parental notification initiatives. However, the three documentaries remind one of the realities undergirding those necessary ballot fights.)

“When Abortion Was Illegal” covers the consequences of the American Medical Association’s successful banning of the formerly legal practice of abortion as quackery. These consequences included reducing abortion information and availability to a dirty secret and treating medical providers as potential snitches. The particularly vile deathbed confessions procedure conditioned medical treatment for women near death from their botched abortions on betrayal of their sexual partners.

Vintage images and interviews with a wide range of people bring this oppressive period alive. Class and race influenced how easily and how safely abortions were made available. Well‑to‑do women could get therapeutic abortions; poorer and minority women relied on strangers’ advice or gambles with bleach douches.

Period solutions to undesired pregnancies get patiently debunked by the film. Shotgun marriages were never built on establishing relationships. Homes for unwed mothers were traumatic experiences for pregnant 12‑ or 14‑year‑old girls. Even giving up a child for adoption still inflicted trauma despite the passage of time.

The lack of abortion opponents in the film is not bias. It’s common sense recognition of the moral indefensibility of a system that ruined many women’s lives. How much great female talent (e.g. gifted dancer Lola Huth) was lost because of abortion access denial?

“From Danger to Dignity” begins with Fadiman’s anecdote regarding her own near‑fatal botched abortion at age 22, courtesy of blood poisoning and a 105‑degree fever. That bit of autobiography implicitly captures the motivations of the legalized abortion activists portrayed in this film. Personal experience with botched abortions fueled these activists’ determination over the next dozen years to spare other women from these horrors.

But the most impressive interviews come with the women who participated in the abortion access underground. These women risked arrest to seriously vet doctors who secretly offered abortions. Members of the Jane abortion counseling service even performed 11,000 safe abortions under police eyes.

The film also follows the sometimes glacial pace of changing abortion laws. “Rape, incest, and endangerment to a woman’s health” exceptions for abortion were first offered legislatively in 1963. Naturally, the film ends with the Roe v. Wade decision. Yet when 87% of U.S. counties lack local abortion providers, how meaningful is the right to an abortion?

The first part of “The Fragile Promise of Choice” presents the nauseatingly familiar causes of limited abortion access in the U.S. “Reasonable” state‑by‑state determinations regarding abortion access has led to a deadly game of legislative chicken. Nearly every U.S. state seems to vie to show how much farther it can legally restrict abortion.

Then there are the sociopaths who feel their religious beliefs justify attacking or harassing abortion clinics, clients, providers, and the providers’ families. Discomfort over abortion is a natural reaction. But when that discomfort gets translated into screaming at stressed pregnant women, fire‑damaged clinics, or murdered abortion providers, an ethical line has surely been crossed. If faith in Islam can be simplistically tarred as a religion promoting terrorism, the brand of extremist Christianity practiced by anti‑abortion aggressors equally deserves the terrorist religion label.

Even with the news of a resurge in bleach douches, this concluding documentary finds reasons for hope. The doctors and clinics that still provide abortions continue doing so because they are well aware of the back alleys’ horrors. The story of how Flathead’s citizens came together to support a clinic struck by anti‑abortion vandalism makes one believe disagreement over abortion need not devolve into pro‑choicers vs. extremists.

An unnamed midwife provides an important insight lost in the screaming. Deciding to abort one’s baby is *not* a lightly made decision. American society’s continued inability to respect the difficulty of that decision or provide unbiased information so that decision can be made wisely is one of America’s greatest failures in this controversy.