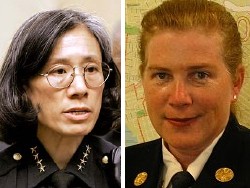 How would you like to make $100,000 a year, get generous annual raises and retire at 55 – with a pension that pays up to 90% of your final salary? San Francisco firefighters and cops get this, while other City workers (who generally make less) only receive up to 75% in retirement pensions. Voters passed a Charter Amendment in 2002 that created this package for police and firefighters – and now it’s costing us dearly. Gavin Newsom’s budget this year gives the Police another $16 million, but $12 million alone goes to pay for increased retirement costs (with 25% of the force eligible to retire.) We were told in 2002 that Proposition H would not cost the City a dime, because (a) the Retirement Fund had a surplus and (b) cops and firefighters would re-negotiate their contributions in hard times. The Mayor’s union contracts with the Firefighters and Police Officers Association did include employee contributions, but it clearly wasn’t enough. Only voters can amend retirement plans, but we can make decisions now that would stem future liabilities. Why do we have cops in civilian jobs, or extra middle managers at the Fire Department? If the City can’t even afford them now, what is going to happen when they retire?

I’ve been reluctant to approach the subject of City retirement benefits, because I strongly support the principle. Public employees who’ve put in many years of work deserve a pension, and the structure of a City Employee Retirement Fund – where employee contributions are invested over time to generate revenue – is sound. San Francisco has three different retirement plans for its employees – police officers, firefighters and “miscellaneous” City workers. A worker is eligible to retire when they reach a certain age (and have worked a minimum number of years), and their pension gets calculated based on those factors. Depending on the plan, a retiree’s pension cannot be higher than a certain percentage of their last working salary.

The problem comes when some employees are paid more generous salaries, get far bigger raises than others, and receive higher pensions that affect the City’s finances during tough fiscal times. In other words, it’s time to look at how we got into the mess we’re in now.

In 1996, the average salary of a San Francisco firefighter was $57,000 – or about half of where it is today. Times were good, the Retirement Fund had a surplus and a firefighter’s pension was up to 70% of their final salary (with “final salary” defined as the average of what they earned during the last three years of service.) Citing the need to recruit more firefighters, a unanimous Board of Supervisors put Proposition D on the ballot – which raised the pension to 75%, and redefined “final salary” as the salary earned during the last year of service. Two years later, they did the same for police officers – under Proposition A. Times were good in 1998, and San Francisco cops were making about $59,000.

Both measures had wide support across the spectrum, and passed. Only one prominent figure spoke out against each of them – State Senator (and former Supervisor) Quentin Kopp, a true “fiscal conservative.” Kopp had been involved in reforms back in 1976 that reined in the City’s employee pension plans, and warned these measures could undo what had been accomplished. In the 1998 ballot argument against Prop A, he argued it would “turn the clock back to an era of runaway expenditures, budgetary gaps and extraordinary pension plans for a selected few city employees, at the expense of taxpayers and other city employees.” Supporters said the City need not worry because the Retirement Fund had a big surplus, but Kopp replied that this “results from flush times and will not last.”

Of course, we were only talking about a 5% increase in maximum pensions for cops and firefighters who had served for decades. Even the City Controller at the time calculated the impact was only a combined $5 million a year. In 2000, the voters extended the same 75% to all other City employees – who up until then had been getting far lower pensions.

But then police and firefighters got even higher benefits. In 2002, a unanimous Board of Supervisors put Proposition H on the ballot – raising their maximum pension to 90%. By then, Quentin Kopp was an appointed Judge – so could not take a stand on propositions. There was no ballot argument against Prop H, and the Police and Firefighters Union campaigned heavily for it. Even progressive publications like the S.F. Bay Guardian endorsed it, after the paper got the cops and firefighters to not oppose a public power measure on the same ballot.

Once again, we were told the Retirement Fund had a big surplus – and the money was just sitting there. City Controller Ed Harrington said it would cost the City $28 million per year, but because of the Fund’s surplus we would not have to kick in public money for “at least the next ten years.” The cops and firefighters promised that it “won’t cost the taxpayers a penny,” because if the surplus ran out they would have to re-negotiate contributions – paying for the added benefits “out of our own pockets.” Prop H passed.

Meanwhile, police and firefighter salaries kept growing. The starting salary for a San Francisco firefighter is now over $70,000, and cops start anywhere between $75,000 and $101,000. In 2007, Mayor Gavin Newsom negotiated a generous union contract with both the Police Officers and the Firefighters Union for his re-election – that gave each group 23% raises over four years.

Keep in mind that pensions are a percentage of income upon retirement – so a series of big wage increases over time can make a huge difference. The Fire Department now has 38 Battalion Chiefs, who each make over $160,000. Their retirement pension will be up to 90% of what they made in their last year – depending on age, and number of years served. A cop or firefighter can choose to retire at age 50, but it’s generally to their advantage to wait a few years for their pension to grow. If you started working at 25 and retire from the force at 55, Prop H allows you to receive the maximum ninety percent.

And the promise (which was written into Prop H) that police and firefighters must pay more into the Retirement Fund if we hit hard times, to avoid bankrupting the City? Both contracts Newsom signed with their unions in 2007 require the workers to contribute 7 or 7.5% of their paychecks into the Fund. Both contracts have language that said: “the parties acknowledge that said [employee] contributions satisfy requirements of [Charter provision that calls for this] for duration of this agreement.” So why does the City now have to absorb an extra $12 million this year in Police retirement payments? The Mayor had the Police re-negotiate their contract this year to address the budget deficit, and they agreed to defer a 2% raise. What about contributing more to their pensions?

Now, the Board of Supervisors want to avoid drastic cuts in health and human services – and a solution is to ask the Police and Fire to “share the pain.” But if firefighters and cops are entitled to Prop H pensions, we can only cut so much from their budgets. A recent report found that 25% of the San Francisco police force is now eligible to start retiring, which will give the City even more financial liabilities.

All this makes it even more imperative to scrap unnecessary personnel in Police and Fire, before the cops and firefighters in those positions stay for 30 years – and start collecting 90% pensions. We must trim the excess number of top-level brass in the Fire Department who make six-figure salaries. And before the City hires a new cop, ever police officer doing a civilian job must get re-assigned to active duty. It’s simply a question of efficiency and foresight.

Last week, the Board’s Budget Committee cut $6 million in unspecified funds out of the Fire Department. Fire Chief Joanne Hayes-White warned this would mean shutting down fire stations, but the Supervisors remained unconvinced. I wish they had been more direct – telling her to start downsizing the top-level staff, where Beyond Chron has identified a few million dollars in savings. Closing a few firehouses might be a last resort, but there are certainly ways to find money in the salary budget. And with the ticking time bomb of 90% retirement pensions, reforming their staff structure becomes even more important.