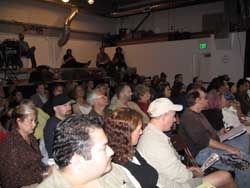 Beyond Chron’s Mid-Market community forum yesterday revealed residents, service providers, and artists living and working in the Mid-Market neighborhood have a dramatically different vision for their community than the Redevelopment Agency does. Over 80 people crammed themselves into Counterpulse, a new community art space in Mid-Market, to voice their hopes and desires for the future of their home. Their simple, nearly unanimous message revolved around stopping displacement – namely, they wanted new housing affordable to current residents, real funding for community art, and fewer cars on their streets.

The forum began with a quick introduction to the Mid-Market Redevelopment Area by some of the community’s leaders, each of whom detailed a different aspect of the current plan. Speakers covered how the plan will affect housing, transportation, jobs and the arts in the neighborhood, each providing a unique perspective on both redevelopment and the Mid-Market plan.

Poor News Network’s Tiny, a.k.a. Lisa Grey-Garcia, kicked off the proceedings with spoken word poetry that painted images of poverty, displacement, and the role the city’s rich and powerful play in both. She then detailed what she believed to be the underlying philosophy behind redevelopment.

“They come in here, to our community, and they tell us we’re a problem that needs to be solved, that we’re a mess that needs to be cleaned up,” said Tiny. “Then they kick us out and say, ‘problem solved!’ Well this time, I don’t think so.”

The most consistent thing voiced by attendees surrounded preventing displacement by providing housing that Mid-Market neighborhood residents could afford. Many speakers at the forum lived in or near Mid-Market, and expressed concern that should housing for the middle and upper-classes be built, they could be forced out.

“I’ve lived in this area for more than 10 years,” said Bill Murphy, an SRO tenant living in Mid-Market. “It’s my home, and I don’t want to have to leave.”

Otto Duffy, another SRO tenant who lives just outside the project area, agreed.

“I just don’t understand it,” said Duffy. “I walk around and I see all this housing built in San Francisco, but we can’t afford any of it. And I think that’s what’s going to happened with Redevelopment, too.”

The forum revealed an alternative vision around housing involving truly low-income housing available to those who live in the Tenderloin and South of Market, the majority of whom make well below the city’s average median income.

Many speakers also agreed on another point – that the process in creating the Mid-Market plan was hopelessly flawed. Several of those at the forum had attended some meetings of the Project Area Committee (PAC), the body responsible for creating the plan. Most found the process did not involve serious community involvement and remained largely unresponsive to public input.

“Sure, they left the door to the meetings open so if someone walking by who happened to see it could walk in,” said Nelson. “But that’s not real community outreach.”

Members of the art community also made their voices heard, including Laurie Lazer of The Luggage Store. Lazer expressed concern about the displacement of her gallery, which she’s operated for more than fifteen years and which lies in the center of Mid-Market. She said she worried both about the threat of eminent domain and that of rich people moving in and not supporting the type of underground art she puts upon the Luggage Store’s walls.

In terms of alternative vision for the area, Shaw asked the audience if they’d prefer to see the Mid-Market theatres, one of which is already slated for demolition, be re-opened and turned into independent movie venues like the Red Vic or Roxy. Almost the entire room raised their hands.

While time did not permit a full discussion of transportation issues, the sentiment of those at the forum seemed clear. When Nelson mentioned redevelopment’s plan to build a new parking garage in the area, allow a parking space for every new unit built, and allow three floors of above ground parking, the audience gave a collective groan.

The Coalition to Take Back Mid-Market will host a second forum on May 25 at the Seneca Hotel, 34 6th Street. More details will be published in the coming weeks on BeyondChron.org.