Resisting Doughnuts That Bite Back: “An Evening With The Duplass Brothers” Preview 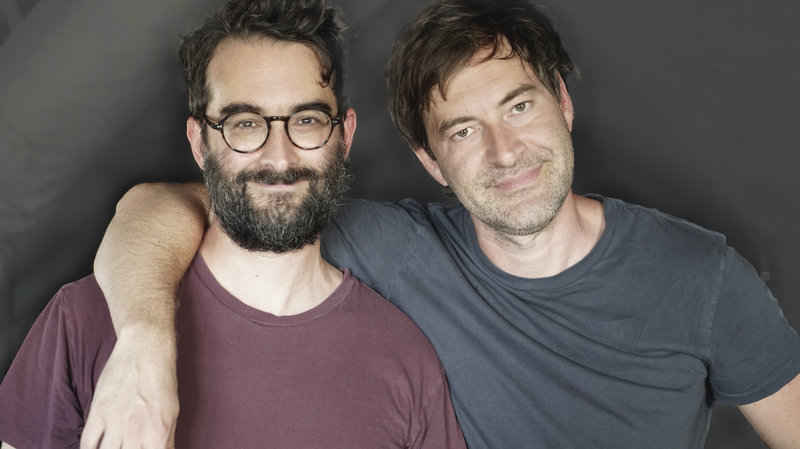 Brothers Jay (left) and Mark Duplass have been making films together since they were kids. Their new memoir is Like Brothers. Carissa Dorson/Penguin Random House

A spare van and a deal on matching recliners helped propel brothers Jay and Mark Duplass to American independent film glory.  Those things were core elements in their breakthrough feature film “The Puffy Chair.”   In the dozen years since that key mumblecore film came out, the New Orleans-born siblings have not only directed three more feature films, but they’ve acted in or produced such films as “Safety Not Guaranteed,” “Outside In,” and “Tangerine.”  They’ve also created the HBO anthology series “Room 104” and now have a four-picture deal with Netflix.

Beyond Chron readers will have a chance to learn firsthand the Duplass Brothers’ secrets to success.  Both brothers are appearing on May 12 at the Jewish Community Center of San Francisco for “An Evening with the Duplass Brothers.”   The event is part of the Duplass siblings’ book tour for their new memoir/essay collection “Like Brothers.”

The new book turns the Duplasses into indie film Prometheuses.  Its pages explain to interested readers how they can make available materials films just like the Duplass Brothers and submit the work to film festivals.   It also shares hard-won knowledge from such things as the abortive “Vince Del Rio” project.

But the book also opens a window on how the brothers can have an uncommonly close emotional and artistic relationship “without killing each other.”  Critical inter-brother commentary delivered with love and a willingness to refer to themselves as Elmer Dinglesplatt, C.P.A. or Diarrhea Party 2049 is part of their secret.

Beyond Chron briefly interviewed Mark Duplass by e-mail prior to this Saturday’s event.  Mark Duplass is the younger brother, and he lists “resisting doughnuts” on his Twitter bio.   (Transcript very lightly edited for clarification purposes.)

Beyond Chron (BC): Sibling rivalry is one of the threads in your new book.  Has this rivalry been more of a hindrance or an inspiration in your artistic development in front of or behind the camera?  Has the rivalry spurred more individual growth as artists or has it made the two of you a stronger creative team?

Mark Duplass (MD):  This is a hard question answer, as we don’t really see it as sibling rivalry.  Our conundrum is more of an intense desire to be close and yet also maintain enough personal space to individuate.  It was super easy when we were younger and all we had was each other.  But now we are married with kids.  And the shit is getting complex.

BC:  Have documentaries been a source of story-telling inspiration for both of you?  What interests you more about the documentaries that impress you?  Is it subject matter (e.g. “Finders Keepers” (court fight over a severed leg))?  Or is it the manner of presentation (e.g. a Werner Herzog documentary)?

MD:  Documentaries are our biggest inspiration as narrative filmmakers.  The sense of “Anything can happen” because things aren’t planned.  The disadvantageous way things are filmed.  The slow, organic pacing.  All of these approximate real life in a way that we try to mimic in narrative storytelling.  And, frankly, the only things we watch consistently are docs.  It’s a huge part of who we are.  Watch the scene in “American Movie” where Marc gives his Uncle Bill a bath and talks about his toenail.  It’s real, sad, hilarious…and it’s all poorly lit and poorly framed.  And the sound sucks.  And it’s a great, great scene.

BC:  Your filmmaking process has been described in the past as “available resources filmmaking.”  Basically, you look at what you have in the way of people and material and use them as the raw material for a film.  But how can your filmmaking model work in more impoverished or resource-poor areas?

MD:  I would argue that it’s the same model.  If you look at our first feature film “The Puffy Chair” (which we made for about $10,000) you can see that that film could now be made for less than $1,000 (the new technology is better and cheaper than what we had in 2004).  You don’t need anything other than what’s in your direct line of sight.  The street you live on.  Your clothes.  Maybe there’s a rusted out dump truck in someone’s backyard you can use as a set piece.  I would argue that the only real limits these days are creativity and time.

BC:  You famously said at a SXSW talk a couple of years ago that “the cavalry isn’t coming to save you.”  Does the push to develop content for streaming services such as Netflix, Amazon, and Hulu change that assessment?  Or do indie films still face the Who-like problem (sorry, Dr. Seuss) of being heard or seen by viewers?

MD:  It’s definitely hard to get seen and heard, especially with so many movies and TV shows being made.  But I don’t think that should stop you from trying.  Because, ultimately, if you make something inspired and new…it will break through.  The good news is that the traditional “star system” is breaking down.  People don’t go see movies just because stars are in them, which paves the way for anyone to make a movie that can break out.  Our 2015 Sundance breakout “Tangerine” was shot on an iPhone.

BC:  A frequent eye-rolling question at film festivals is asking about the budget used to make a film.  There seems to be a belief that having more money for a film means a filmmaker has more creativity available.  How does your phrase “resisting the doughnut” serve as a caution against such beliefs?

MD:  I wish that phrase was a metaphor.  But it, quite literally, is about donuts.  And how much I love them.  And cannot resist them.  BUT.  Now that you mention, that donut analogy is quite clever.  Yes, we have had many promising Hollywood donuts dangled in front of our greedy mouths through the years.  But here’s the thing.  Those donuts, when you try to bite them?  They normally just disappear.  They are normally just illusions.  And when they’re not?  Those donuts bite back.  And it hurts.  Badly.  So we’ve decided to turn away from the sweet glory of donuts and we just started making our own bread.  That we can control.  Under our own roof.  With our recipes.  And for a lot less money.

BC:  How would you describe the niche you’ve carved for yourself in filmmaking?  Mogul might apply because you produced “Wild Wild Country,” “Room 104,” and “Animals.”  Yet instead of leaving the joys and headaches of filmmaking to others, you still act in and direct films.

MD:  We see ourselves as having a nice little corner of the sandbox where we get to do exactly what we want because, most of the time, we pay for it ourselves.  While we probably won’t smash any box office records or win any Oscars, we get to make the art we want to make and we get to do it our way, with our friends and family.  That’s plenty for me.

(“An Evening With The Duplass Brothers” takes place at 8 PM on May 12, 2018 at the Jewish Community Center of San Francisco (3200 California Street, SF).  SFFILM Director of Programming Rachel Rosen will interview Jay and Mark Duplass on stage.  Tickets are $55 per person, price including a copy of “Like Brothers.”  For further information about the event and to order advance tickets, go to www.jccsf.org/arts-ideas/duplass-brothers/ .)