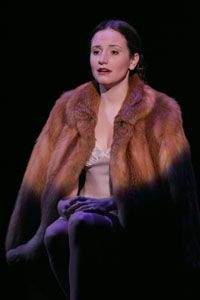 RESCUE AND RECOVERY IS THE STORY OF A DOCTOR (Cameron) who goes beyond the elementary examination in his office. That’s only a part of this complex story about love and sex addiction. BIG in this play definitely has a starring role. I’m talking package here. To make sure that we don’t miss the point the playwright mentions it several times throughout the play.

Cameron the Doc, is recently divorced. His ex wife more or less tells the story from a separate space on the stage. But Cameron also throws his two cents into the story. In this play it’s all about me. The Doc feels unloved and dejected. The young man who he over examines in his office sleeps around. His ex wife also has her share of sexual escapades. This is an opening of a closet that is just filled with intrigue and surprises.

Out of that closet – the clothes fall all over the stage and the actors step into the limelight in total nudity. I was close enough that I could have reached out and touched someone – but I was trying to balance my press kit and hold a pen – so that was out of the question. Besides, there was the audience to think about.

I have mixed emotions about “Rescue”. At one point I wanted to be rescued from a play that seemed to repeat the same point over and over. Plus, I was a little taken back with some of the old cliche jokes like the one about the snakebite. I heard that when I was ten and that was at least 99 years ago. On the other hand the acting is so good – that I was intrigued by what could happen next. It seemed to me that there could be nothing new that they could do to each other’s emotions. I was wrong. There was more emotional damage on the way.

Rescue and Recovery is a dark comedy by Steve Murray. The outstanding cast members are Bill Olson, Jennifer Dean, Noah Kelly (who plays multiple roles), Javier Galito-Cava and Mark-Joseph Barham. Sizzling direction by Ed Decker. If it were I – I would cut and paste this play to tighten it up. It’s a great subject that needs more focus. As for the acting.WOW.EEE! .. THEY ARE OUTSTANDING! RATING: THREE GLASSES OF CHAMPAGNE!!! At the New Conservatory Center.

TheatreWorks in Palo Alto has just announced a thrilling new season. Artistic Director Robert Kelley and Managing Director Randy Adams let us in on the great line-up for 2005-06. There is a Wasserstein new musical collaboration with Cy Coleman – “Pamela’s First Musical.” There is also the West Coast Premiere of Harold & Maude: The Musical with book and lyrics by Tom Jones.and the American Premiere of Frank McGuiness’ Olivier Award-nominated West End hit “Dolly West’s Kitchen.” These are just a few works that will end with a spruced up revival of the Tony Award Winner “Into The Woods.”

LOSE WEIGHT IN ONE DAY! Now that I have your attention let me tell you about Brian Dennehy who is not on a diet. He is going to star in “TRUMBO: Red, White & Blacklisted” at the Post Street Theater Mar. 8-20. Trumbo, screenwriter on Exodus, Kitty Foyle, Spartacus, Roman Holiday and Papillon was fired from Metro-Goldwyn-Mayer and imprisoned for a year in 1950 after refusing, along with the rest of the “Hollywood Ten,” to answer questions by Congress about his political affiliations. Dennehy is a superb actor who has won Tony Awards, A Golden Globe Award, a Screen Actors Guild Award and an Emmy nomination. You should attend, but leave your inhibitions home. This is bold stuff.

A STAR IS BORN! That would be Clinton Leupp, as Miss Coco Peru as the world and sassy star of stage and screen who you have seen in “To Wong Foo”, “Trick”, “Boy Meets Boy,” “Will and Grace”, “The Tragic Life of the Singing Nun”, and many other snap dragon shows. Live Theater will never seem the same. Tip: Arrive in style – this is gonna be a cool show. At The New Conservatory Center March 12 – April 5.

FROM THE BEST OF BROADWAY FOLKS HERE’S A HOT FA-LASH! EVITA TAKES A VILLA! HELL, SHE TAKES ON ALL OF ARGENTINA. Our beloved Evita marches back to San Francisco on the Golden Gate Stage. Yes, she still drags that fur coat behind her and has more microphones in front of her than Madonna. The biggie musical “Evita” by Andrew Lloyd Webber and Tim Rice, Evita (Eva Peron) had the world mesmerized as she made her “Rainbow Tour” through all of Europe. Just like Jackie Kennedy – they loved her in Paris. She grew up in poverty – but made it really big in Buenos Aires. No wonder she sings “Don’t Cry For Me Argentina.” And please – wear something smart. There is pleasure to burn here. Tix on sale Feb. 6.

LETS HEAR A BIG GRUNT! Why? Because Testosterone is back at the Curran Theatre with Rob Becker’s “Defending the Caveman”. This play is mostly about how men and women relate to each other – or, don’t relate. “The Caveman” grunts a lot and is basically your couch potato slob. He never saw at T.V. Remote he didn’t love. In 96 Becker was invited to the annual AAMFT (American Assoc. of Marriage and Family Therapy) Convention in Toronto where he performed for over 2,000 therapists. Gee, they need therapy too? Who knew? Anyway, Caveman has fans from across the world. Rob Becker has good advice for you. Mar. 16 – 20. Leave your Caveman tool at home. There are no wild Animals in the Theater.

WICKED IS AS WICKED DOES! I couldn’t believe our luck. “Wicked” – the Broadway musical about the Wicked Witch in the Wizard of Oz and how she got to be such a mean bitch is coming back to where it all started. Right here in this little town by the bay. Do you think there is room for one more Witch? For this one – yes. This is a great spectacular show that will take over the Orpheum Theater on Aug. 4. My Tarot cards say that you should fire up your Broom and get Tix early.

UNDISCOVERED NIGHTLIFE IN SAN FRANCISCO: This Valentines weekend Jacqui Naylor sings the songs of Gershwin & Hart. Naylor, who reminds of film star Veronica Lake – has a voice that is slick as ice. She is refreshing and beguiling. You’ll find her at the hot new Dinner Club on Market called Michael’s Octavia Lounge. .Next at Michael’s is Los Angeles Jazz and Cabaret Artist Carolee for three performances only. She will be performing songs identified with Peggy Lee, Billie Holiday, Ella Fitzgerald, Helen Forrest and Lee Wiley in a tribute to The Big Band era where these ladies sang with Bands like Tommy Dorsey and Glen Miller. No, it’s not a rave party. It’s Superclub. However, I call it San Francisco’s new “In” Supperclub. There is no dancing on the ceiling – but you won’t be Sensory-deprived. I’ll catch up with you there.