Republicans Put Ukrainians Ahead of Americans 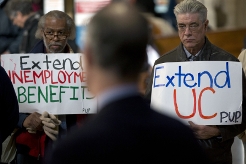 As Republicans support a $1billion aid package for the Ukraine, they are not demanding to offset this funding with budget cuts elsewhere. Yet that is their excuse for cutting food stamps, unemployment benefits, and infrastructure improvements for Americans.

I support U.S. aid to the Ukraine, but think the media needs to challenge Congressional Republicans over their willingness to spend money for Ukrainians but not Americans. Republicans do not even support traditional job creation infrastructure projects, even when it would bring home jobs and improvements to their own states and districts.

Yet despite their obvious hypocrisy toward spending, the media still frames the Party’s opposition to spending on Americans as a responsible position. The GOP’s prioritizing Ukrainians over hard-working Americans seems like a great issue for Democrats in the midterm-elections.

In fact, this would be a great time for organized labor and community activists to mobilize the unemployed and hungry against Republicans spending to help people abroad but not at home. Of course, such protests, like those held at the White House last Sunday against the Keystone Pipeline, could be ignored by a media too busy covering protests in Kiev.

McCain to the Rescue

When a foreign policy issue takes center stage, the national television media invariably turn to Republican Senator John McCain. By 2012 McCain had made 53 appearances on Meet the Press alone, and he is a constant presence on CNN.

CNN anchor Anderson Cooper called on McCain again this week, giving viewers the false impression that the Senator has particular expertise in this area of the world. He has none.

As has often been pointed out, John McCain’s response to every foreign policy crisis since he joined the Senate has been threefold: bomb, invade, or fund others to do one or both. No matter how wrong McCain has been on the Iraq war and every other global issue, he remains the go-to politician for the traditional U.S. media.

If the U.S. media gave as much space to food stamp and unemployment cuts—or to highlighting Republicans spending a trillion dollars on Iraq without worrying about the cost— as it has given to Ukraine, Republicans would have been forced to stop such heartless attacks. But the lack of media coverage of those victimized in America has facilitated their cruel agenda.