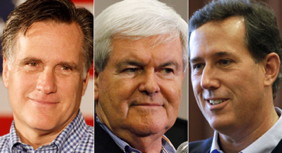 What do Mitt Romney, Rick Santorum and Newt Gingrich all have in common? Besides being the top three GOP presidential candidates of 2012, they are all former elected officials. None of them have actually won an election in at least a decade – and none of them will be directly accountable to an electoral constituency when it’s all over. Despite hundreds of news articles written about the Republican field, virtually no one has made this rather obvious point – and it speaks to how much the GOP has fallen in public esteem. I checked long and hard to find an historical precedent, and the only analogies that come close to the current GOP crop are the 1924 Democratic presidential field against Calvin Coolidge, or the 1900 race against William McKinley. Fittingly, those were also times when the party in question hit rock bottom.

Let’s put things in perspective. Mitt Romney was a one-term Governor of Massachusetts, who chose not to run for re-election six years ago – and has been running for President ever since. Rick Santorum won his last election in 2000, and was booted from the Senate six years later – losing in an 18-point landslide, an unheard of margin for an incumbent who isn’t under indictment. And Newt Gingrich was last re-elected fourteen years ago by his suburban Atlanta constituents – only to resign from Congress under an ethical cloud, and has never held public office since.

With the vicious hatred that Tea Party conservatives have against President Barack Obama, the only three candidates left to battle for the Republican nomination are all political has-been’s.

It’s remarkable – given how media outlets cover this field by referring to each candidate as former Governor Romney, former Senator Santorum and former Speaker Gingrich – that few have mentioned this fact about every serious Republican Presidential candidate. Granted, it’s not unusual for former elected officials to run for President (Howard Dean, John Edwards, Mike Huckabee and Ronald Reagan were all out of office when they ran), but most had been out for less than two years. For an entire field in one party (and the case of Romney, Gingrich and Santorum, they’ve all been out for several years) is unprecedented.

In fact, it’s hard to find a historical comparison. Back in February, Randy Shaw wrote about the 1940 Republican National Convention – a “brokered convention” that emerged with Wendell Willkie as the nominee, and explained that Rick Santorum would be the most unlikely presidential party nominee since Willkie. But even Republicans that year managed to field a number of sitting Senators who wanted to challenge Roosevelt. No, you have to go back even further …

In 1924, the Democratic nomination fight came down to an ugly convention between pro- and anti-Ku Klux Klan forces. When the convention reached a stalemate between New York Governor Al Smith and former Treasury Secretary William McAdoo, delegates finally settled on a compromise candidate – John W. Davis, an obscure ex-Congressman from West Virginia. This prompted Will Rogers to quip: “I am not a member of an organized political party; I am a Democrat.” Davis went on to lose the general election that year, in what one historian has referred to as the “high tide of American conservatism.”

But even the 1924 Democratic nomination fight, as nasty as it was, had a sitting elected official – New York Governor Al Smith, who would go on to be his party’s nominee four years later. If you want a more accurate comparison to the 2012 Republican contest, maybe we need to go back to the 1900 Democratic Convention. Former Nebraska Congressman William Jennings Bryan, who was the party’s nominee in 1896, got a free pass – after his only real opponent, Admiral George Dewey, was quoted saying the President’s job would be easy because all you do is take orders. Bryan went on to lose to William McKinley that November – in what was a Republican year.

That’s right, folks. The 2012 Republican presidential field is the first time in over a century where none of the leading contenders of a party are actually sitting elected officials. In a way, it proves two things – one, that this is what the GOP base wants; as polls have shown on issue after issue, Republican primary voters are far more out of touch with independent voters than Democratic voters. And secondly, the Tea Party is so angry at all government that they want candidates who have no connection to anyone elected to public office.

So we now have a field of candidates who have no other job or responsibility than running for President. And if history is any guide, the Republican nominee will lose to Obama in the fall.