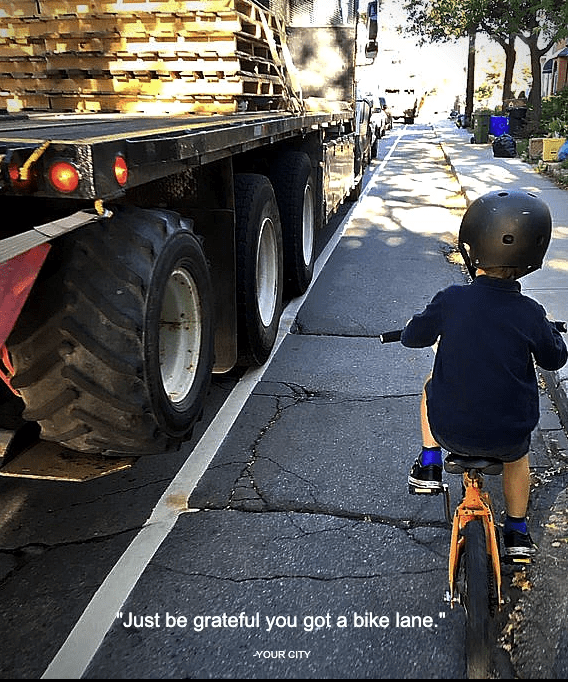 (This first appeared in Streetsblog SF)

Ride a bike as a child, and adults smile at you. But as soon as “…you’re over 15 or 16, you’re a Lycra road-warrior, an urban hipster, a crazy car-hater–you’re never just a regular person who takes their kids to school,” explained Tom Flood, an adman based in suburban Toronto who used to do advertising for car companies.

His perspective changed when he had kids–and started trying to ride bikes with them. The road setup in the lead image, where a magical line is supposed to keep a cyclist safe from a truck or car, is as typical in Toronto as it is in the Bay Area. “The first time I took my kids to daycare and school on a bike I realized this is an absolute disaster,” he told Streetsblog. “We must all agree this is not good enough.”

But people don’t agree, because for some 60 years, explained Flood, car advertising has programmed them that driving is freedom, driving is how you get around, that driving–even reckless driving–is a symbol of status and power. But after 15 years in the industry, he’s set out to use the same advertising and marketing tools honed by the car industry to highlight some of the insanity of our auto-uber-alles culture.

Readers probably first encountered Flood’s work via an article in Streetsblog USA and Transportation Alternatives’ Vision Zero Cities Journal. It should be required reading for anyone involved in the safe streets movement. He addresses the extent to which car advertising and our resultant culture has programmed people into thinking it’s okay to allow scenes such as the lead image or the tweet below, with cyclists forced to navigate between 20-ton vehicles:

As Flood puts it in his ad below, nobody would expect people to walk between trucks, cars and buses, so why would we put a person on a bike in the same situation?

And yet the general public seems to resent people on bikes for demanding better. There’s a weird sort of us-and-them tribalism that occurs. “Wanting safe streets makes you anti car? Why?” said Flood, adding that he owns a car too. “I’m really tired of having to explain this to people, adults especially.”

Tired he may be, but that’s what he’s set out to do. In addition to some of his brilliant magazine-style ads, Flood has done some simple video ads to start re-framing the discussion:

He stresses that simple messages such as these can be more effective than talking about “road diets” or “bike lanes” or “Vision Zero,” although he says there is room for that and for the accompanying data. But first advocates have to cut through the car-company-motivated brainwashing. “If would be so great if we had a large marketing machine like the car companies… trying to create messaging that is not polarizing.”

One of the most insidious things car companies have done, he explained, is normalize and even promote reckless driving. No doubt everyone has seen the kind of car ad embedded below, featuring a movie star driving like a maniac in the middle of a city.

How many people have died or been seriously injured by drivers who were influenced by the onslaught of this kind of advertising and movies from Bullitt to the Fast and Furious glamorizing this kind of irresponsible behavior?

Flood rough-produced an alternate version, to remind people what’s actually at stake when motorists speed, drive recklessly and continually take their eyes off the road in the middle of a city.

Traffic violence, explained Flood, is rooted in car marketing that treats vehicle safety as something that only applies to the occupants of cars.

That same culture puts all the onus of avoiding a crash on the victims of traffic violence, rather than the perpetrators. As seen in his “the arm band” ad:

Another of Flood’s magazine style ads

Car culture has to change, he says, because it’s killing us. “It’s heart breaking,” said Flood. “We have to get our culture back to normal.”

To see more of Flood’s work, check out his web page.