Report: We Really Need to Divert Money from Drivers to Transit Users 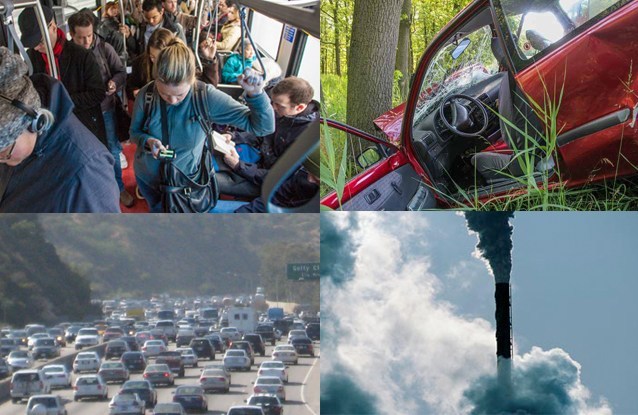 The federal government needs an entirely different way of funding transportation — one that would divert billions of dollars that currently subsidize and encourage driving to fund and expand transit, a new report argues.

The Center for American Progress analysis, “A Reform Agenda for the U.S. Department of Transportation” [read it here], focuses on the many ways federal highway money could be used better — to create more equity, reduce pollution and increase safety.

“New federal dollars must be paired with policy reforms to ensure that funding from Washington yields the greatest social, environmental, and economic return on investment,” the report’s author, Kevin DeGood, argues.

The main problem, as DeGood sees it, is that the current way in which Washington doles out money doesn’t do anything to solve five of America’s basic transportation problems: a high roadway death rate, climate change, congestion, inequity of economic opportunity, and general level of repair of our nation’s infrastructure.

The report offers a mix of new and old recommendations:

Equity is a main thread through all of the report’s recommendations. In this area, the report suggests:

“Federal transportation policy [must] promote inclusive prosperity and social equity,” DeGood writes. “This means accounting for the discriminatory legacy of past investments that resulted in geographic dislocation, reduced economic opportunity, and poor community health. To remediate these harms, the U.S. Department of Transportation should target funding to those communities facing the greatest need. … Continuing with a business-as-usual approach will not result in progress on these pressing challenges.”

Neither the White House nor the Biden campaign responded immediately. We will update this story if they do.