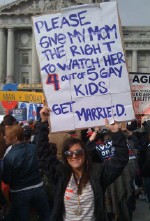 It’s depressing to think – after having just lost an expensive and exhausting campaign – that repealing Proposition 8 could mean going back to the ballot. It is unfair and unjust that a slim majority of California voters took a fundamental right away from a minority, jeopardizing equal protection. But the state Supreme Court heard oral arguments on the City Attorney’s lawsuit yesterday, and the signs were very discouraging. Justice Joyce Kennard (who last year voted to grant marriage equality) was hostile to the case against Prop 8, and Chief Justice Ron George was skeptical. Not that there isn’t any hope: perhaps the extreme arguments made by Prop 8 lawyer Kenneth Starr will inadvertently sway the Court into recognizing the measure’s dangerous effects. But no one should expect the Court to repeal Prop 8. Activists must get ready for a 2010 proposition campaign as the next available remedy, however deficient a political solution that would be. We must learn from the colossal mistakes of the past campaign, and a new generation of activists will make it happen.

Unlike the federal Constitution – which can only be amended by a two-thirds vote of the U.S. Senate and a three-fourths vote by the state legislatures – California can change its constitution by a simple majority vote of the people. The state distinguishes between an “amendment” and a “revision” (with the latter requiring a higher threshold), but there is very little case law to flesh out the details. Generally speaking, an amendment tinkers around the edges of the constitution – while a revision has a more profound impact. Prop 8 abolished a fundamental right for a protected minority group (i.e., gays and lesbians), when a core purpose of the Courts and the constitution is to protect minorities. If that doesn’t have a profound impact, I don’t know what does – since no rights are sacred.

The legal grounds to overrule Prop 8 are sound, but that doesn’t mean the Court would do it. Roe v. Wade didn’t just happen because an all-male Supreme Court woke up one day to discover that women have a constitutional right to choose. A mass movement worked for years to make this inevitable. A political movement is necessary to overturn Prop 8, giving judges the “space” to do the right thing. Even then, the courts are an inherently conservative institution that shy away from controversy – and rely heavily on caution, tradition, legal and historical precedent.

Shannon Minter of the National Center for Lesbian Rights (NCLR) had barely started his oral argument yesterday morning, when Chief Justice Ron George interrupted. “Are you saying the passage of Prop 8,” said George, “also took away – beyond the label of marriage – the core of the substantive rights of marriage?” Minter gave an admirable response, but the question wasn’t a good sign. George had written the marriage decision that argued the term ‘marriage’ was essential to enjoying its rights and dignity, but now he was parsing it out as just a word. And he’s the “swing” vote on the Court’s 4-3 split.

Associate Justice Joyce Kennard – who had also supported the Court’s marriage decision – then piled on, maintaining an adversarial tone throughout the three-hour proceeding. “What Prop 8 did was take away the label of marriage and its applicability to same-sex couples,” she said, “but it left intact our holding that sexual orientation is a suspect class. Is it still your view the sky has fallen in and gays and lesbians are left with nothing?”

By far the most revealing exchange was when Deputy City Attorney Therese Stewart began to mention Kennard’s opinion last year. Kennard cut her off, became extremely defensive and said: “in the Marriage cases, the Court was asked to do what it normally does – interpret a statute. Here, we have a body of case law that talks about amendments and revisions. We are talking about the power of the people – an inalienable right.” The right of voters to change the Constitution was Kennard’s main concern throughout the arguments. “How can the court willy nilly disregard the will of the people,” she asked.

Kennard also zeroed in on the precedent of an earlier case, where voters were allowed to restore the death penalty by passing a constitutional amendment – after courts had thrown it out as cruel and unusual punishment. “It would appear to me,” she stated, “that life is a fundamental right.” But unlike equal protection or fundamental rights, the definition of cruel and unusual punishment is “public standards of decency” (i.e., will of the voters.) As attorney Raymond Marshall said, “cruel and unusual punishment is unique because it’s an issue that can be decided by the people.” He also added that voters did not single out a suspect class to receive the death penalty, and the matter still has judicial review.

Chief Justice George repeatedly focused on two points throughout the oral arguments, which don’t bode well for the result. When Shannon Minter explained how rights cannot be taken away by mere amendments (because an amendment must be consistent with the Constitution’s general principles), George characterized that logic as a “one-way street.” How can an amendment extend rights, he asked, but then not take them away? He also repeatedly asked if the problem was with how California changes its constitution, and that maybe the amendment process could just be changed – a “political solution.”

As I stood in Civic Center Park to watch the proceedings on a satellite video, George’s skeptical queries – peppered with Kennard’s “questions” that were actually long-winded statements – gave me a sinking and depressing feeling that we were going to lose.

If there’s a glimmer of hope, it may be from the other side’s presentation. Kenneth Starr (of Monica Lewinsky fame) gave the oral argument for upholding Prop 8, and blurted out a few legal points that – if drawn to their conclusion – would create an awful precedent. By arguing that Prop 8 could not be overruled, he said: “the people are sovereign … even if unwise. And they can tug at equality.” In other words, no protections for minorities are sacred – as long as a majority of the voters choose to enshrine it in the constitution.

Can the Court reconcile the precedent of upholding Prop 8, with Ken Starr’s notion that we can “tug at equality”? When asked if rolling back domestic partnerships for gay couples would also be a valid use of the initiative process, Starr said it would be an “acceptable amendment” – which may have disturbed some of the Justices. It was clear from oral arguments the Court will not go along with Starr’s request to invalidate the 18,000 marriage licenses of same-sex couples who wed before the passage of Prop 8, but how can they recognize it as a valid amendment without incorporating Starr’s logic?

Don’t count on the Supreme Court to do the right thing – certainly not after today’s oral arguments. If we’re going to win back marriage equality, it may have to be at the ballot box in 2010 – after an organized, grassroots effort collects signatures and then passes a constitutional amendment to repeal Prop 8. Everyone agrees that “No on 8” ran an awful campaign, and a whole new crop of activists who felt alienated by its top-down structure are coming out of the woodwork to create a better future. The trick is to keep that energy going.

What’s amazed me is how many groups organically sprouted out of Prop 8’s passage. Join the Impact is still going on strong, and One Struggle, One Fight is planning a March to Sacramento at the end of the month. The Courage Campaign is building the grassroots infrastructure we’ll need to run a successful statewide campaign, and a new group – And Marriage for All – is doing the critical outreach to communities of color. And I’d be remiss not to acknowledge what Marriage Equality USA and Molly McKay has done for years, cultivating a network of grassroots chapter leaders through the state.

I won’t lie. The prospect of having to wage another statewide electoral campaign for me is overwhelming, exhausting and depressing. The lawyer in me still yearns for “justice in the courts,” with a majority of Justices concluding Prop 8 was not a proper amendment. It would make those right-wing blowhards explode, because we’d have marriage equality in this state for good – and they could never take it away at the ballot box again with lies and distortions. But I know that if we must go back to the voters, we’ll never walk alone. A whole new army of allies have joined us, and this time we’re determined not to lose.