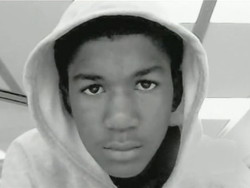 Suppose George Zimmerman were arrested, tried and convicted of the murder of Trayvon Martin tomorrow, what would the legacy of Trayvon Martin be on the following day? Would we all put away our hoodies and stop marching, or would we take up a National Repeal Movement?

The Right Wing has a national movement to repeal Obamacare, thereby suppressing access to affordable healthcare for millions, especially poor people and people of color. Trayvon Martin will not have to worry about the repeal of Obamacare or about staying on his parent’s healthcare plan until he is twenty six. He will never be twenty six.

Trayvon Martin stood his ground, faced hate and faced fear. He could not repeal the bullet that took his life. We can make sure that his death stands for something bigger than just putting one man on trial.

It was Malcolm X that coined the phrase “The Ballot or the Bullet” in 1964. He was expressing the anger the Black community was feeling back then, and what actions could be taken. It was a warning and a prediction. We are at a similar juncture in the struggle once again in 2012.

That is why we need to channel the energy and the anger over the murder of Trayvon Martin into action that has a lasting effect and recognize the opportunity this moment presents us. We need to repeal two of the most heinous types of laws that have infected our political discourse in the name of Trayvon Martin’s life and death.

Trayvon Martin will never get to vote. Even if he were alive, when he would have turned 18, especially in the state of Florida, it would have been difficult for him to even register to vote. And in many states across this country he would not have been able to vote at all because of the draconian voter suppression ID laws which target minorities, young and first time voters as well as the elderly.

We must repeal these laws and mobilize the same people that are coming out to rallies and marches to demand that those laws be struck down by state legislatures.

The Stand Your Ground law in Florida, which may or may not be used as a defense in the Trayvon Martin case should be immediately repealed and every other law that is in place modeled on the Stand Your Ground law should be repealed. The two Repeal efforts go hand in hand. More of these pro gun laws will proliferate in more states if the NRA (National Rifle Association) has its way.

And the NRA will have its way with the help of groups like ALEC (American Legislative Exchange Council) if millions of American citizens are prevented from voting in local and national elections. Presidential elections are fine, but everyone is focused on what will happen in November that they forget about their local politics. It is in local elections that the rubber hits the road, and where the bullet hits its mark.

We have to follow through with meaningful actions that will not only see to it that Trayvon Martin has a lasting legacy, but also saves other young lives that could be in the crosshairs of another George Zimmerman. Emmett Till’s death as a young man compelled the nation to pass Civil Rights legislation that included the Voting Rights Act. Let us ensure that Trayvon Martin did not die in vain.

Repeal all voter suppression laws and all Stand Your Ground laws, NOW!!

Bertha Lewis is the former Executive Director of ACORN, and is now with The Black Institute. This piece was first published at Black Star News.