“Rent” is a Must-See for Progressives 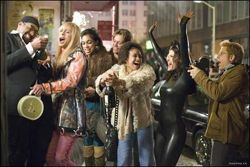 The movie “Rent” opened last week, a rare major Hollywood film with a powerful anti-gentrification message. When the play “Rent” came to San Francisco, ticket prices were so high that its true audience— progressives and tenants—could not afford to go. Much of the movie was filmed on San Francisco’s 6th Street, and its chief theme—the threat of eviction and displacement of low-income artists and cultural workers due to the late 1980’s gentrification of New York’s Lower East Side— speaks as profoundly of San Francisco today as it did for New York City. This is a brilliant film that has not gotten the glowing reviews it deserves for a simple reason: its attack on the values of mainstream America hits too close to home.

If anyone knows Rent Director and San Francisco resident Chris Columbus, please send him a copy of this review. Nothing in his career foreshadowed his ability to get the movie version of “Rent” exactly right, and he has made a major studio film whose pure and powerful anti-gentrification, anti-corporate message would never have been approved but for his track record.

Unlike the hit film Chicago, which improved upon the play by changing it, Columbus’s “Rent” stays almost entirely true to the original. This is that rare musical that makes you feel as if you are at the play, and in some scenes—such as the anti-gentrification performance piece performed at a 6th Street Club—the vehicle of film provides a power that was missing in the theater.

“Rent” involves the threatened eviction of two aging bohemians from a Tompkins Square area warehouse. The tenants have not paid rent for a year under an agreement with their prior roommate, who has subsequently married the daughter of a real estate developer and wants his former friends out so he can build a multimedia center known as “Cyberspace.”

Set in the era of rising AIDS cases in NYC, one of the two lead characters has HIV and develops a love interest with a young Latina (Rosario Dawson, one of two actors not in the Broadway cast) who also has HIV. A drag queen named Angel has full-blown AIDS, and her creativity and “live for the day” spirit comes to symbolize the persistence of bohemia amidst America’s growing homogenization.

A major obstacle appeared to make a movie of “Rent” problematic: the difficulty getting today’s audiences to relate to the unique 1989 NYC milieu. But the gentrification struggles of 1980’s NYC may resonate more in San Francisco today than when “Rent” premiered, and the play actually anticipated the late 1990’s Mission District battle against Bryant Square, a “Cyberspace” type development proposed for 20th and Bryant Streets.

In fact, the film perfectly captures the current pressure for upscale development in Mid-Market and other low-income communities in San Francisco. Its only flaw is the portrayal of the greedy developers in suits, when we all know that those seeking to destroy bohemia for projects like Cyberspace tend to dress down, wear berets, and insist that gentrification is a cultural advance.

While “Rent” has generally received favorable reviews, it has not received the type of plaudits often awarded to films detailing social injustice in Bolivia, Eastern Europe, or even in small-town or rural America. This is a film that asks tough questions about how those living in urban America live their lives, and there is a reason that so few movies addressing such themes are made by major studios: they make critics uneasy.

Roger Ebert, a once counter-culture figure who has gotten rich through the syndication of his “Two Thumbs Up” television show, wrote a very wishy-washy review that ignored the power of its social message. Ebert’s attitude was a snooty -“Oh, how profound, talking about reclaiming Bohemia in America 2005.”

The Bay Guardian review echoed Ebert’s attitude, comparing a climatic scene in “Rent” to a scene in the vacuous Travolta-Newton John film, Grease, and concluding that the problem with the movie is that it is too “earnest.” The Guardian critic claimed she could not emotionally connect with the characters because there was a “giant movie screen in the way;” irony is an easier emotion to convey than empathy when evaluating the very real problem defined in the film’s theme song of “living in America at the end of the millennium.”

Ebert and other critics have stated that those unfamiliar with the play will not understand the movie. My 16- year old daughter had never seen the play, and loved the film.

“Rent” reminds us of the days when the Federal Government refused to fund AIDS research or treatment, and when the cultural life of New York City and San Francisco was dominated by the virus’s spread. It should remind us of the incredible success of ACT-UP and other AIDS activists in dramatically changing federal policy.

The fact that “Rent” was shot in San Francisco is fitting. NYC has been so gentrified since 1989 that the film speaks more to our struggles than those in the East Village.

It’s great to see the Seneca Hotel and other Sixth Street spots on the big screen, and even better to see a major film that inspires hope, rather than cynicism.

Unless you do not like musicals—and this music is fantastic-give yourself a gift and see “Rent” on the big-screen.