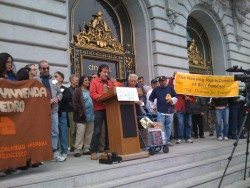 With San Francisco unemployment at 9.5%, an army of tenants rallied at City Hall yesterday to support Supervisor Chris Daly’s economic relief package for renters. In these tough times, landlords have tried to squeeze the most out of tenants they can – and getting a rent increase for many tenants could not happen at a worse possible time. The Board’s Land Use Committee heard the pieces of legislation, which include letting tenants get more roommates, curbing the practice of “banked” increases and blocking rent hikes if the tenant already pays more than 33% of their income in rent. The Small Property Owners of San Francisco came out in full force, as they fiercely debated the San Francisco Tenants Union, Housing Rights Committee and St. Peter’s Housing Committee. The legislation now goes to the Board’s Government Audit and Oversight Committee for further review.

San Francisco rents exploded to historic highs a few years ago, and market rents have just started inching back down recently – but only after the unemployment rate more than doubles. For low-income tenants already having a tough time in the City, getting a rent increase can be deadly.

Take John Buchta – a long-term Tenderloin tenant who lives on Social Security. He just got a 27% rent increase – because of “banked” increases from prior years his landlord did not use. John’s not getting a “cost-of-living” adjustment from the state this year (due to the ongoing budget crisis), the state just passed a sales tax hike, Arnold Schwarzenegger vetoed his renters’ tax credit, and Muni will be raising fares. John says he will have to move out.

One of the proposals would be to cap “banked” rent increases to 8% a year. This would not take away a landlord’s right to eventually use all the annual rent increases they can, but it would help prevent a sudden shock for tenants living on a fixed income. After the hearing, Supervisors Eric Mar and David Chiu both agreed this was a sensible reform.

A more controversial proposal would be to block all rent increases if the tenant already pays 33% of their income in rent. There has been a lot of confusion and hysteria about this, because landlords point out that most tenants already pay more than that. But as Ted Gullicksen of the SF Tenants Union explained, it is not a “rent rollback” that every tenant could take advantage of. Only tenants who get a new rent increase could use it, and like Hardship Appeals for capital improvement petitions the burden of proof is on the tenant.

Eric Mar expressed concern about the burden on small property owners, but pointed out the proposal gives landlords the option of proving financial hardship – and the Rent Board could balance competing interests. David Chiu said this was a proposal he was not ready to support – as it goes to the Audit and Oversight Committee for further review.

The last proposal – allowing tenants to move in an unrelated roommate to afford the rent – has also been controversial. Landlord advocates blasted it during public comment, as they said it would result in overcrowding – and force them to incur additional costs.

But like Matt Gonzalez’s proposal that allowed tenants to move in a spouse or relative (which has been law since 2004), maximum levels of occupancy under the Housing Code would still apply. And Daly agreed to an amendment that would allow landlords to file for a Rent Board petition to raise the rent to cover any additional costs that may result.

Like most pitched battles between tenants and landlords, the two-hour hearing contained some emotional language. “Affordable housing is not a right,” said Noni Richen of the Small Property Owners of San Francisco, which elicited boos from the audience. “It’s an entitlement.” Of course, an entitlement is a right – and other landlords agreed it’s a right.

My favorite moment during public comment, however, was from a middle-aged Latina woman – who spoke in Spanish with an interpreter from St. Peter’s Housing Committee. It’s not unusual to hear outraged tenants complain about whether landlords can sleep at night, given the high rents being charged. But this tenant took the rhetoric to a whole new level. “Landlords,” she said, “can you still live inside the womb of your mother?”