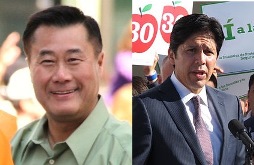 As Dean Preston of Tenants Together reported on June 4, a moderate bill to protect tenants from wrongfully losing security deposits was defeated last week in the California State Senate. It won only 13 of the necessary 21 votes. Among those opposing the bill was Bay Area State Senator Leland Yee, strongly backed by labor unions despite consistently being among the most pro-landlord Democrats in Sacramento. Other pro-labor Democrats did not vote on the bill, which had the same impact as voting no. This group includes the Los Angeles based Kevin De Leon ran on the 2010 ballot as a “Human and Civil Rights Organizer;” organized labor is his biggest financial backer and has contributed over $400,000 to De Leon since 2008. Organized labor promotes a broadly progressive agenda in Sacramento, but gives a pass to legislators that favor big landlords over working people. The once strong labor-tenant alliance is clearly broken, and must be renewed.

In the June 2012 primary for an Assembly seat in Santa Monica, Speaker John Perez and his allies gave over $1 million to the pro-landlord Betsy Butler to secure a spot in the runoff in the heavily pro-tenant district. Publicizing her backing by leading landlord groups, Butler barely made the runoff, and then lost in November to Richard Bloom.

Perez is often described as a “progressive,” despite his backing of pro-landlord candidates. He knows that organized labor is the key contributor to Democratic Assembly campaigns, and that as he keeps the Cal Fed happy he is free to favor big landlords over working people.

Organized labor has certainly earned its influence with California’s Democratic legislators, and has its own history of being betrayed by allegedly “progressive” Democrats (e.g. Fabian Nunez, a onetime labor organizer who rose to Speaker with union political support but who now works for the anti-union Michelle Rhee). But labor has the money and troops on the ground to ensure a level of legislator accountability that other groups representing working people lack.

In the late 1990’s, California ACORN convened joint meetings between labor and tenant activists to build mutual support. This labor-tenant alliance brought tenants critical victories in Sacramento on a range of issues. Former State Senator John Burton was the leading legislative advocate for both tenants and labor in those years, and it is fair to say that he expected both constituencies to demonstrate loyalty to the other.

Enacting pro-tenant legislation became difficult after Democrat Gray Davis was recalled and replaced by Arnold Schwarzenegger. The following years took tenant issues off the political radar, and when Jerry Brown took office in 2011, two factors underlying the once powerful labor-tenant alliance had changed.

First, neither Senate leader Darrell Steinberg nor Speaker Perez prioritize tenant issues. To use Sacramento-speak, they do not turn tenant bills into “leadership” bills that they expect their colleagues to support. When tenants had their greatest success, Senate leaders like John Burton and David Roberti made it clear that helping tenants was a leadership priority.

Second, the dissolution of CA ACORN in 2009 meant that tenants lacked the statewide base they had in the 1990’s. Tenants Together has tried to rebuild this base, but lacks the ongoing relationships and past history with labor leaders and union activists that ACORN brought to the table.

As a result of both key factors, labor is not connected to statewide tenant struggles. Unions are involved with legislation addressing foreclosure abuses and to fund affordable housing, but not with security deposits and other landlord-tenant measures.

The labor-tenant alliance must be renewed. Many union members are tenants, and are victimized by issues like wrongful security deposit withholding.

It makes no sense for two movements backing working people and economic justice to not engage in mutual support. Tenant groups have nowhere near the resources of labor, but they can help ensure that tenants back pro-labor candidates and support labor actions against WalMart, Hyatt and other union targets.

California progressive should be embarrassed over the Democratic State Senate’s defeat of a mild measure that simply required landlords who wrongfully withhold security deposits to pay double damages. And strengthening the labor-tenant alliance will ensure it does not happen again.

Randy Shaw has worked to successfully pass a number of state measures for tenants. He is the author of The Activist’s Handbook and Beyond the Fields: Cesar Chavez, the UFW and the Struggle for Justice in the 21st Century