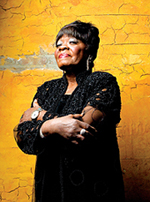 In 2001, I had the privilege of working with the incredible, incomparable Koko Taylor at the State Theater, just outside Washington, DC. Koko arrived for sound check right on time and I graciously invited her upstairs to the theater’s modern “green room”. Koko took one look at the two flights of stairs and said, “Oh no baby, I can’t go up and down those all night.” Faced with a “MacGyver moment”, I quickly fashioned an all new “green room” just off stage, with comfy chairs, a Japanese screen for privacy and a wardrobe rack for her change of clothes. “Now that’s what I’m talkin’ about baby”, she said. “You gonna take care of Koko tonight baby?”, she asked. “Trust me Koko, a dash of digital delay and a spoonful of reverb and you’ll be good to go”, I told her. Dressed and ready to go, Koko thanked me, took the stage and proved she could still bring it with the best of them. Sadly, Grammy award-winning blues legend Koko Taylor, aged 80, died yesterday in her hometown of Chicago, IL, as a result of complications following her May 19th surgery to correct a gastrointestinal bleed. I hope heaven is ready for “the one, the only, “Ko-ko Tay-lor!!!”

On May 7, 2009, the critically acclaimed Taylor, known worldwide as the “Queen of the Blues,” won her 29th Blues Music Award (for Traditional Female Blues Artist Of The Year), making her the recipient of more Blues Music Awards than any other artist. In 2004 she received the NEA National Heritage Fellowship Award, which is among the highest honors given to an American artist. Her most recent CD, 2007’s Old School, was nominated for a Grammy (eight of her nine Alligator albums were Grammy-nominated). She won a Grammy in 1984 for her guest appearance on the compilation album Blues Explosion on Atlantic.

Born Cora Walton on a sharecropper’s farm just outside Memphis, TN, on September 28, 1928, Koko, nicknamed for her love of chocolate, fell in love with music at an early age. Inspired by gospel music and WDIA blues disc jockeys B.B. King and Rufus Thomas, Taylor began belting the blues with her five brothers and sisters, accompanying themselves on their homemade instruments. In 1952, Taylor and her soon-to-be-husband, the late Robert “Pops” Taylor, traveled to Chicago with nothing but, in Koko’s words, “thirty-five cents and a box of Ritz Crackers.”

In Chicago, “Pops” worked for a packing company, and Koko cleaned houses. Together they frequented the city’s blues clubs nightly. Encouraged by her husband, Koko began to sit in with the city’s top blues bands, and soon she was in demand as a guest artist. One evening in 1962 Koko was approached by arranger/composer Willie Dixon. Overwhelmed by Koko’s performance, Dixon landed Koko a Chess Records recording contract, where he produced her several singles, two albums and penned her million-selling 1965 hit “Wang Dang Doodle,” which would become Taylor’s signature song.

After Chess Records was sold, Taylor found a home with the Chicago’s Alligator Records in 1975 and released the Grammy-nominated I Got What It Takes. National touring in the late 1960s and early 1970s also improved her fan base, and she became even more accessible to a wider record-buying public after signing with Alligator. She recorded nine albums for Alligator, 8 of which were Grammy-nominated), and come to dominate the female blues singer ranks, winning twenty five W. C. Handy Awards (more than any other artist). After her recovery from a near-fatal car crash in 1989, the 1990s found Taylor in films such as Blues Brothers 2000, and she opened a blues club on Division Street in Chicago in 1994, but it closed in 1999.

Over the course of her 40-plus-year career, Taylor received every award the blues world has to offer. On March 3, 1993, Chicago Mayor Richard M. Daley honored Taylor with a “Legend Of The Year” Award and declared “Koko Taylor Day” throughout Chicago. In 1997, she was inducted into the Blues Foundation’s Hall of Fame. A year later, Chicago Magazine named her “Chicagoan Of The Year” and, in 1999, Taylor received the Blues Foundation’s Lifetime Achievement Award. In 2009 Taylor performed in Washington, D.C. at The Kennedy Center Honors honoring Morgan Freeman.

Koko Taylor was one of very few women who found success in the male-dominated blues world. She took her music from the tiny clubs of Chicago’s South Side to concert halls and major festivals all over the world. She shared stages with every major blues star, including Muddy Waters, Howlin’ Wolf, B.B. King, Junior Wells and Buddy Guy as well as rock icons Robert Plant and Jimmy Page. Taylor influenced musicians such as Bonnie Raitt, Shemekia Copeland, Janis Joplin, Shannon Curfman, and Susan Tedeschi. In the years prior to her death, she performed over 70 concerts a year and resided just south of Chicago in Country Club Hills, Illinois.

Taylor’s final performance was on May 7, 2009 in Memphis at the Blues Music Awards, where she sang “Wang Dang Doodle” after receiving her award for Traditional Blues Female Artist Of The Year.

We are going to miss you Koko.

E. “Doc” Smith is a musician and recording engineer who has worked with the likes of Brian Eno, Madonna, Warren Zevon, Mickey Hart, Jimmy Cliff, and Koko Taylor among others. He is also the inventor of the musical instrument, the Drummstick. He can be reached via myspace.com/edoctorsmith