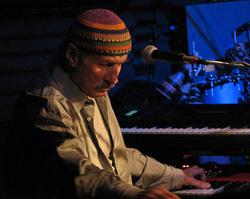 September 11th is indeed a tragic day for many, and just last year, the jazz world saw the departure of the legendary Joe Zawinul. My earliest memories of Zawinul were from the mid 1970’s, during his days with the enigmatic group Weather Report, featuring the incomparable saxophonist, Wayne Shorter. Among them, my fondest were his first shows at Washington, D.C.’s Kennedy Center with percussionist Dom Um Romeo and bassist Alphonso Johnson; with drummer Chester Thompson and Alex Acuna at G.W.’s Lisner Auditorium; to a surprising double bill with John McLaughlin’s Shakti, and the debut of the bass wunderkind, Jaco Pastorius. With Weather Report, Zawinul brought the electronic keyboard and synthesizers to jazz like no one had before. Zawinul, alongside Shorter, took us to new musical heights, imitated by many, but surpassed by none. Herbie Hancock wrote of Zawinul’s passing, “Joe Zawinul is one of my oldest friends in the music business. He was a force as a composer and an amazing conceptualizer. He opened up a doorway between jazz and rock n’ roll and was a major influence on Miles Davis, Wayne Shorter and me. The world has never been the same since he made his contribution to our society.”

On September 11, 2007, the Associated Press reported that Zawinul had died, and a spokeswoman for Vienna’s Wilhelmina Clinic said he had been hospitalized for over a month and suffered from a rare form of skin cancer. Zawinul won acclaim for his keyboard work on chart-topping Miles Davis albums such as “In A Silent Way” and “Bitches Brew,” and was a leading force behind the so-called “Electric Jazz” movement. In 1970, Zawinul and saxophonist Wayne Shorter founded Weather Report and produced a series of albums including “Heavy Weather,” “Black Market,” “Mysterious Traveller”, “Tale Spinnin'”, “I Sing the Body Electric,” and the Grammy-winning live recording “8:30.”

He is credited with bringing the electric piano and synthesizer into the jazz mainstream, but was frustrated by the lack of respect for electric keyboards and new technology among jazz purists. “There is no difference between a Stradivarius or a beautiful synthesizer sound,” Zawinul told Jazziz magazine earlier this year. “People make a big mistake in putting down electronic music. Yes, it’s been misused and abused, but that’s true of every music.

“There is nothing wrong with electronic music as long as you’re putting some soul behind the technology.” Austrian Chancellor Alfred Gusenbauer praised Zawinul’s “unpretentious way of dealing with listeners” and said he wasn’t “blinded by superficialities.” Born in 1932, Zawinul grew up in a working-class family during World War II in the Austrian capital. He played accordion on the streets to make money and received classical piano training as a child prodigy at the Vienna Conservatory. In the postwar years, he grew interested in American jazz, playing in a dance band that included the future Austrian President Thomas Klestil and making a name for himself on the local jazz scene in bands led by saxophonist Hans Koller and others.

“One thing about Viennese musicians, they can really groove, more than even the German bands can,” Zawinul said in a 2007 Downbeat magazine interview. “It’s something in our nature, perhaps. We’re cosmopolitan and interracial — Czech, Slavic, Hungarian, Romanian, Bulgarian, Turkish a little bit.”

In 1959, Zawinul emigrated to the United States on a scholarship to study at the Berklee School of Music in Boston, but left to join Maynard Fergusion’s big band. He next landed a gig with Dinah Washington; his funky piano can be heard on her 1959 hit “What a Diff’rence a Day Made.”

Zawinul rose to international fame after joining alto saxophonist Cannonball Adderley’s band in 1961. During his nine-year stint with the band, he composed such tunes as “Walk Tall,” “Country Preacher,” and most notably the gospel-influenced, soul-jazz anthem “Mercy, Mercy, Mercy,” his first important recording on electric piano, which climbed the pop charts and won a Grammy for Adderley.

In the late ’60s, Zawinul recorded with Davis’ studio band, His tune “In a Silent Way” served as the title track for the trumpeter’s first foray into the electric arena. Zawinul’s composition “Pharoah’s Dance” was featured on Davis’ groundbreaking 1970 jazz-rock fusion album “Bitches Brew,” which won Davis a 1970 Grammy for best jazz performance, large group or soloist with large group.

Weather Report enjoyed its biggest commercial success with the 1977 album “Heavy Weather” which featured Zawinul’s catchy tune “Birdland,” which became one of the most recognizable jazz hits of the ’70s after it was also recorded by Maynard Ferguson and the vocal group Manhattan Transfer. After Weather Report broke up in 1986, Zawinul went on to form The Zawinul Syndicate, which brought together a global village of musicians who recorded such albums at the Grammy-nominated “My People” (1996) and “World Tour” (1998). In November 2006, I wrote about what would sadly turn out to be, Zawinul’s last concert in San Francisco with his Zawinul Syndicate for the SF Jazz Festival at the Palace of Fine Arts. Count yourselves among the lucky few if you caught Zawinul then… “Jozy”, as McLaughlin would call him, is still sorely be missed.