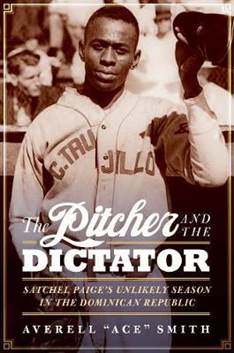 —-from The Pitcher and the Dictator

I am a longtime admirer of Satchel Paige. After learning of his exploits from baseball books I connected with him when managing the 1948 Cleveland Indians, my favorite strat-o-matic baseball team. Paige was my go-to reliever, just as he was in the actual 1948 season. I was thrilled to meet Paige in the early 1970’s as he was getting on the bus to go to the Oldtimers game in Anaheim. He was nearing 70, but I had no doubt that he still could have gotten through an inning against current major leaguers.

So I began Averell “Ace” Smith’s new book on Satchel Paige, The Pitcher and the Dictator, with high expectations. And they were exceeded. Smith powerfully evokes the nuances of the complex Paige and the superstar’s role in battling for social and racial justice.

Smith rightly notes that Satchel Paige should be as famous as Babe Ruth and Mohammed Ali. He was the Black Panther baseball superhero of his time.

But Major League Baseball barred African-Americans until 1947. When Indians owner Bill Veeck signed Paige to a contract in 1948, the legendary pitcher was 42 years old.

In those days, pitchers were typically done by 35. Even today we see few pitchers over 40. Yet the 42 year old Paige played a critical role in getting the Cleveland Indians to the World Series (they tied for the pennant and beat the Red Sox in a playoff). This was followed by the Tribe’s most recent World Series fin

Smith’s book captures a lesser known part of Paige’s mythical life: his play on the 1937 Ciudad Trujillo team essentially run by the Dominican Republic’s dictator, Rafael Trujillo. Paige received a whopping $30,000 to play for Trujillo, nearly $500,000 in today’s dollars. To put this in perspective, Paige likely earned more than the rest of the star-studded team combined.

Larry Tye’s excellent biography, Satchel: The Life and Times of an American Legend, details Paige’s remarkable negotiating skills. He may have been the only Negro League player, and one of the few baseball players outside of Ruth, to figure out how to get anything close to fair compensation in an era where owners held all the cards.

But when Paige took money from a dictator who had killed thousands at will the stakes around his performance were high. The vicious Trujillo was not tolerant of failure. He expected Paige to deliver a championship or else.

A Hall of Fame Lineup

I could go on and on but better if you just read the book.

Smith’s baseball writing does not match the lyricism of Roger Angell. Nor is he a raconteur like Roger Kahn of “The Boys of Summer.” But Smith brings to the reader the feeling of the Dominican streets Paige walked and the sense of liberation he and other black players felt while living in a country that did not practice legal segregation and race discrimination.

Smith gets readers to share his anger over racism against African-Americans. We become vested in the outcome, rooting for Paige and his fellow black players to get a fair playing field (and decent dollars) for their talents.

I could not put the book down. I think all fans of baseball history will feel the same.

Spending hours with Satchel Paige is a joy. A movie on his remarkable life is long overdue. While we wait for that film, pick up The Pitcher and the Dictator.

And always recall one of Paige’s many fabled adages, “Don’t look back. Something might be gaining on you.”

Randy Shaw is Editor of Beyond Chron. His new book, Generation Priced Out: Who Will Live in the New Urban America, will be out in October from the University of California Press