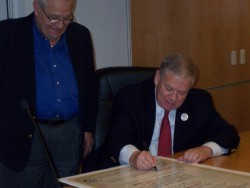 In a moving ceremony at UNITE HERE’s New York City headquarters, retired officers of the former ILGWU, including the daughter of union founder David Dubinsky, formally affiliated with UNITE HERE. The action undermines claims by former SEIU President Andy Stern and others that SEIU, not UNITE HERE, is the protector of the ILGWU’s proud legacy. Stern used his grandmother’s ILGWU membership to justify SEIU’s attacks on UNITE HERE, a campaign John Wilhelm condemned yesterday as the first time “where an international union tried to hijack another international union.” Former UNITE HERE President Bruce Raynor had previously barred the retired officers from meeting in the union’s building, and Wilhelm said he was “thrilled to welcome you back.”

The history of the American labor movement was on display in New York City yesterday as longtime former leaders of the International Ladies Garment Workers Union formally affiliated with UNITE HERE. Led by Emmanuel Leventhal, the group has been in a nine year legal battle with Bruce Raynor and former UNITE officers over the theft of their life insurance benefits.

Jean Appleton, ILGWU founder David Dubinsky’s daughter, described the lawsuit as “not about money, but about principle.” Describing her colleagues as lifetime “soldiers for labor justice,” she condemned Raynor and his crowd for mistreating ILGWU veterans.

One retired ILGWU official even compared Raynor to J.P. Stevens, saying, “just as they were the worst corporation, he is the worst union official.”

The meeting took place in a building that Raynor tried to control even after he was suspended from his duties with UNITE HERE. The union currently has lawsuits against him seeking to recover over $15 million in wrongfully transferred funds. This lawsuit, along with the retirees’ claim, is pending before Judge Daniels in federal court in New York City.

This was the first I heard from Wilhelm since Mary Kay Henry’s ascension to the SEIU presidency. Henry has indicated a desire to reach a settlement with UNITE HERE, but as Wilhelm noted, “there is settling and there is settling on fair terms.”

In case anyone thought Wilhelm would be offering an olive branch to Henry, this was quickly dispelled. He described SEIU’s treatment of the ILGWU retirees’ claims as a “disgrace to the union,” and called SEIU affiliate Workers United a “fake entity.”

Not mentioned by Wilhelm was the fact that SEIU is seeking to decertify a UNITE HERE local at the Baltimore airport in a May 25 election, all the while publicly denying it is seeking to raid UNITE HERE.

Wilhelm told the retirees he would try to include their issues as part of the overall settlement discussions with UNITE HERE, but conveyed little sense of optimism of anything happening soon. In fact, sources told Beyond Chron that Henry is so busy trying to find out what’s going on at SEIU that it could be some time before she even learns of the negotiating history between the parties, or is prepared to move forward on a serious settlement proposal.

A settlement conference on the retirees’ lawsuit is set for late June. In the meantime, these ILGWU expressed appreciation at being allowed to once again meet at UNITE HERE headquarters, which they and Wilhelm reminded the audience was built not by a few top leaders, but by garment workers.