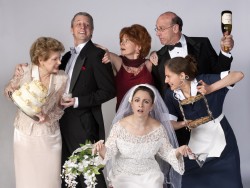 REGRETS ONLY – CRACKLES WITH WIT

Fashion and society snobbery give us plenty of zingers to snicker over in Paul Rudnick’s “Regrets Only.” There is the Gay Designer friend, and everyone chortles over lines like this from a socialite: “Is it cold outside? Do I need a bracelet?” The socialites are sometimes overwhelmed by the quips from the Maid. She’s not your ordinary Socialite maid. In this Rudnick play, she’s not supposed to be normal. And why should she be? Everyone else in the play is “Nuts.” As we follow the maid that never misses a chance to pull out a joke from her cleaning rag – she drops a bombshell. Her prim and proper employers are shocked.

This comedy gem reveals other secrets – and brings the “Same Sex Marriage” controversy to the conversation. But, it’s not so heavy with the political stuff. The play leaves us with many rich rewarding, oh ‘My God’ gems. Oh, to be a socialite. They have so much giddy fun.

The staging is awesome. The timing perfect and the actors are “Hot Tickets”. Its just good hi-jinks fun – but remember – your hair and clothes must be perfect. And those nails – I’d check them too!

AT THE NEW CONSERVATORY THEATRE

The Family from Hell. “The Homecoming.” Photo: Kevin Berne.

This play is loaded with angry, caustic characters that manipulate with sadistic tricks. There is the mean spirited father who pits everyone against each other. He plays his sons Lenny and Joey like a violin. He even verbally dresses down the other brother ‘Sam’ – a limo driver.

Then there is Ruth (Rene Augeson). Lenny offers Ruth “a paying job’. He wants her in his stable of girls. Jack Willis as ‘father’ is relentless. He uses his tongue to lash out at everyone. His trade was a ‘meat butcher’ and he yields the same butcher like cruelty with his voice, as he does when he butchers animals.

There is something about the Pinter play that seems very much like Tennessee Williams’ “Cat on a Hot Tin Roof”. The same violent mistrust exits in this unhappy household (just like Big Daddy in Tin Roof.) Both plays have the same feel to them (Williams came first).

This is a strong, raw, repugnant play that does not have a happy ending. But seeing the wonderful acting at A.C.T. is certainly worth being creeped out for a couple of hours. Especially if you’re really into verbal abuse.

AT THE AMERICAN CONSERVATORY THEATRE

Recently at the Rrazz Room. Emily Bergl dazzled the audience. Courtesy photo from her Home Page.

EMILY BERGL at the famed Rrazz Room took us on a uproarious trip with dazzling standards from the 30’s and 40’s. Some of them were upbeat, many were moving fables about love and it’s implications. She doesn’t need a ‘Dream Cast’ – she is the dream.

With her Betty Boop eyes, she blinked her long eyelashes on Show Stoppers like: “Ten Cents A Dance” and “Material Girl” with G. Scott Lacy. Those two were just fabulous – but there are many more songs. Bergl does a little dancing, mugging and charms the lucky audience that saw the show – including me. If they recast “Sweet Charity” it should star Bergl. She would be absolutely perfect in the role.

One minute she’s a flapper, the next — Bergl is a movie star in a 30’s movie. And as she sings in her gorgeous, magic stage gown – she transforms her look right before our eyes. And just absolutely spectacular was “Mad About The Boy” (Noel Coward). Channeling “The Boswell Sisters” (30’s) – Bergl sealed the deal with “Dream A Little Dream of Me” – breathtakingly impressive.

Also the show stopping “Bei Mir Bist Du Schon” was not only fun, but also damned inventive. This is a version that you’ve never heard before, but will love it — when you hear it.

Recently Bergl, who is on the Hit TV Show Desperate Housewives shot herself in the head, but — not to worry – my Hollywood spies tell me that her role will continue on the show. Will she be in a coma? Only an unnamed Celeb knows – but my guess is that she will recover slowly.

Sorry, if you missed Bergl this time. However, she will be coming back to the Rrazz Room soon. Watch for it at: www.therrazzroom.com.

Pizarelli, is a world-renowned jazz guitarist and singer. So good, Town & Country Magazine called him “Hip with a wink”. To say that he is creative, doesn’t take it far enough. When Pizzarelli and his wife ‘mashup’’ unexpected songs like Berlin’s “Count Your Blessings” with the hit song from ‘Rent’ – “Seasons of Love” – is not just good music – it is perfect musical genius.

The Evening was called “Heart of a Saturday Night” at the famed Fairmont Venetian Room. They kept everyone in the room enchanted with music from duke Ellington, Tom Waits, Joni Mitchell, Count Basie, Cole Porter and Tom Waits. There is some talk – but really funny stuff. Jessica Molaskey has been in many Broadway shows. Here are just a few: Dream, Tommy, Sunday in the Park with George, Crazy For You, Les Miserables, Chess, Cats and Oklahoma. She has also at Lincoln Center in “A Man of No Importance.”

It’s cool jazz and brilliant guitar playing and singing – that keeps Pizzarelli in the spotlight. Producer Marilyn Levinson of Bay Area Cabaret has brought Cabaret back to the Venetian Room. It’s the perfect place to hear fantastic music. Right up there — on top of Nob Hill. How much more romantic can it get? Well, you could roll down the grass as you listen to Pizzarelli on your Iphone or Ipad.