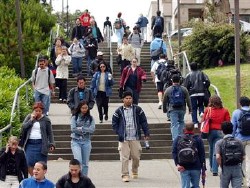 Each year, 100,000 students go to City College of San Francisco to earn university credits, get first-rate vocational training, master English as their second language, and enrich their lives in many different ways. This is mostly due to a talented faculty and staff, dedicated to student success.

But the Community College District has been through some troubled times. The District Attorney charged three former administrators, including the former chancellor. Bond-funded construction projects promised to voters were years late and significantly over budget, resulting in the temporary shelving of several needed projects.

Reform can be bad-tasting medicine, but is required for a healthy system. With the support of the current chancellor, we have been steadily building a stronger District. Our reform efforts began two years ago, when Trustees John Rizzo and Milton Marks pushed through a mandate to conduct a performance audit, which has only recently identified some of the structural causes of many of the cost overruns.

In 2008, our internal investigation of alleged misdeeds by the previous administration led to the hiring of an internal auditor. Since then, the auditor has been investigating accounting procedures, uncovering deficiencies in management practices, and recommending changes.

Last year, after four years of delays at the Board of Trustees, we passed the first part of sunshine reform to make the governance of the District more open and accessible to the public. We hope to pass the second part early next year. We also wrote and passed policies that strengthen the power of the Citizen’s Bond Oversight Committee. On the management side, the Chancellor is restructuring the executive team, with the departure of some long-time administrators and the elevation of the role of legal services at the District.

Most recently, Trustee Steve Ngo, along with Marks and Rizzo, introduced an extensive package of fiscal and ethics reform proposals that build on our previous work. The reform package would establish an additional controller position to ensure compliance with laws and regulations governing public contracts. Other reforms would help reduce the number of change orders in construction projects, an area identified in an audit as driving up costs. We also propose to impose stronger requirements than existing law provides for avoiding conflict of interests and certified ethics training. The new policies would reinforce protections for whistle blowing that would expose government waste and illegal activity and expand financial liability for wrongdoing by individuals. And, we are seeking a complete ban on contracts to any vendor who has also donated to a Board Member’s campaign committee.

We hope the Board of Trustees will adopt our policy proposals – some have already passed. Not to do so would be a reversal of the progress we’ve made so far. The problems confronting the College did not develop overnight – and the audits now underway may still uncover other inherited problems. Entrenched interests may resist some of our efforts; however, we are committed to an open and fair process for considering our recommendations.

We are making substantial headway in the right direction as the College continues – even in the face of devastating funding cuts – to do what it has always done: train workers, teach basic skills and provide opportunities for San Franciscans from all walks of life to get an education and change their lives for the better.

Milton Marks, John Rizzo and Steve Ngo are members of the San Francisco Community College District Board of Trustees.