Reflections on the National Day Against Police Brutality 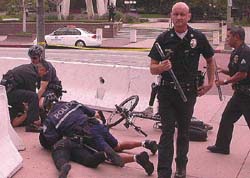 I’ve never been a big fan of the police.

My uncle was one of Philly’s Finest. At family gatherings, he bragged about beating up drag queens along what was then called “the drag strip,” an area of the city’s gay ghetto where women and queens did what they had to, in order to bring home the bacon (or in some cases the tofu). After I came screaming out of the closet and certain members of la famiglia went into operatic hysterics, my uncle approached my brother about “taking care of the family problem,” because I was disgracing my relatives by going on TV and having my name quoted in the newspapers. He wasn’t talking about a lecture.

Then there were the men in blue who cruised around our neighborhood at night. Sometimes when I was coming home late, I got stopped because there had been a purse snatching or other crime and the suspect looked like me. We all knew what that meant. I lived in the Italian area. It was assumed that we were all part of the Soprano clan.

When I came out in 1971, the gay bars in Philly operated openly despite a state law that prohibited serving liquor to queers. The reason that they enjoyed relative freedom was obvious: The cops took payoffs. If the bar didn’t fork up the cash, the establishment was raided. I was caught once in a raid at one of the city’s most popular clubs. I was underage at the time. Luckily, the guy in the kitchen let me sneak out the alley. As fate would have it, a decade and a half later, I covered the trial of several police officers indicted for those payoffs.

Some cops were never held accountable for their actions. I was active in the anti-war movement in the early 70s. One of the protests I helped organize was on the morning after four students were shot at Kent State in Ohio by National Guardsmen. We assembled near the Bell Tower in the heart of Temple University where I was a student. After a brief rally, we headed down Broad Street to City Hall. Police Commissioner Frank Rizzo sent tanks to greet us. He warned us to disperse. We kept marching. Officers rushed through the crowd and randomly beat protesters. I just missed having my head bashed. The girl in front of me wasn’t so lucky. She went down in a pool of blood.

At a 1974 demo against an author who had written a homophobic book, I saw police club a protester over the head and drag him by his long hair to the paddy wagon, a stream of blood trailing behind him. At a peaceful ACT UP protest in the late 80s I witnessed cops clubbing friends of mine who sat down in the middle of the street.

Those images were flashing through my head on Sunday, October 22, the 11th annual national day against police brutality. My group, the Peaceniks, sang at the local rally that occurred at Jefferson Park after a long march from Haight and Stanyan. I heard a lot of sad stories that afternoon from family members who lost loved ones to police bullets.

As a society we need to re-think the way the police operate. Not all cops are bad, but those who are leave their indelible marks on communities and families. It doesn’t have to be that way. As one speaker at the rally reminded us, there are countries such as Australia where cops don’t carry guns. In other places, neighborhood watches do the work of the beat cops. Many speakers called for more police accountability and for a partnership between police and communities. “We pay their salaries, they work for us,” said longtime queer activist Calvin Gipson, who served as a co-emcee for the event.

It’s time that we the people started acting like employers.

Tommi Avicolli Mecca is a radical southern Italian (as in Sacco and Vanzetti not Al Capone) working-class queer performer, activist and writer.