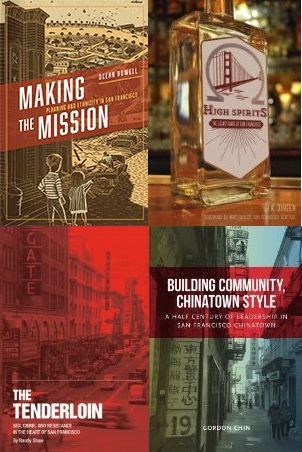 On the 100th anniversary of the city’s 1915 Panama-Pacific International Exposition, four new books uncover the real grit of San Francisco and its neighborhoods.

My new book, The Tenderloin: Sex, Crime and Resistance in the Heart of San Francisco, begins by recapturing the days when many saw the Tenderloin as the “Paris of the West.” Known for its bars, brothels and gambling, for over fifty years the Tenderloin was the place people came to have fun in San Francisco.

My book also addresses the Tenderloin’s steep decline and it long road to revival. It solves the mystery of how a neighborhood surrounded by wealthy Union Square, Hayes Valley and SOMA has avoided gentrification and remained primarily low income (see historian Paul Buhle’s review, San Francisco: The High Life of the Lowlifes).

Gordon Chin’s Building Community, Chinatown Style was next released. My review stated Chin “offers the true history of how Chinatown survived as a low-income neighborhood.” The book also describes how Chin and the Chinatown Community Development Center (CCDC)  “created a model for community building that other neighborhoods can follow.”

Unlike the three other books that take us through 2015, Ocean Howell’s book on the Mission ends in 1973. The Mission’s pre-1960’s history has rarely been chronicled and Howell makes a significant contribution to our understanding of this period. He shows how strongly the Mission identified as a working-class community, seeing itself as almost a separate city from the rest of San Francisco (a spirit that hasn’t changed).

Like the Tenderloin, the Mission was very powerful into the 1950’s. Two of the leaders of the Mission Promotion Association, its top neighborhood improvement group, were Mayors James Phelan (1897- 1902) and “Sunny” Jim Rolph (1912-1930). Howell’s description of the pre-1960’s Mission makes it appear more like the post-1970’s Excelsior than the hipster enclave it became.

First, downtown sought to expedite transportation by building highways. The Mission’s Bayshore Freeway was the first new project, preceding the other plans that would later prompt the city’s famous “freeway revolt.”

Downtown interests also proposed turning Mission Street into a highway, but the community quickly defeated the idea. Mission Street was the neighborhood’s shopping hub at the time. A 1958 San Francisco News-Call Bulletin photo depicts a “Huge Turnout of shoppers along the Mission District’s Miracle Mile offering Dollar Day bargains.” The photo shows so many people clogging Mission Street sidewalks that it looks like a Mid-Market movie line from the time.

Urban renewal also topped downtown’s agenda. The Mission’s housing had significant habitability problems and the neighborhood sought public funding  for upgrades. Howell refutes the common view that activists opposed bringing Redevelopment into the Mission and shows that the Mission actually supported the Agency’s plans. These plans were for rehabilitation, not the mass demolitions and displacement that occurred in SOMA and the Fillmore.

The Mission did not become a Redevelopment Area because the community demanded veto power over any final plans. But this was legally impossible because federal law vested final decision-making power in the Board of Supervisors. Howell does not provide quotes from activists explaining why they devoted so much time to a legally unwinnable campaign. It may have been that activists actually did not want Redevelopment but had to act like they did in order to get rehabilitation money from other public sources.

The book takes us into the Mission planning battles of the late 1960’s, which has also been covered in Mike Miller’s A Community Organizer’s Tale. In case anyone thinks the current battles to “Save the Mission” are new, Howell cites community groups’1969 platform:

“The Mission wants to hold on to its color, its fluidity, and its traditional role as Port of Entry for San Francisco….Its objective is to retain its multi-cultural, multi ethnic healthy mix of tenants and homeowners, and its easy flow between income and racial groups.”

J.K. Dineen’s book on the legacy bars of San Francisco covers most San Francisco neighborhoods in uncovering an essential part of city history. Dineen brings the stories of historic bars like Bayview’s Sam Jordan’s Bar and Grill, the Wild, Wild West in Bernal Heights, and the Mission’s Double Play bar (which opened in 1909) to life, allowing readers to feel like they are actually in the bar talking to the owner/bartender.

While Dineen’s topic is bars, he has actually written a unique social history of the city’s working class, for whom “dive” bars were a prime social connecting point. That so many have survived, with their décor and bar menu intact, shows the resilience of the city’s working-class culture notwithstanding rising housing costs and the transformation of once affordable neighborhoods into upscale enclaves over the past four decades.

I’m sure a famous person has already said this, but you can’t understand a city’s history without understanding its bars. In my efforts to assemble the lost history of San Francisco’s Tenderloin, I discovered a treasure trove of bar matchbooks that were often the only remaining record of once wildly popular establishments. In reading Dineen’s book I kept wishing that a similar work had been written in the 1940’s and 1950’s; what insights into a changing San Francisco would have been gained had Dineen been able to compare comments by legacy bars today with those made about the same bar over sixty years ago.

If you have free time during the holidays I suggest using High Spirits as a guide to discovering bars like Bayview’s Silver Crest Donut Shop or the Hi Dive at Pier 28 on The Embarcadero. Dineen notes that the Hi Dive (established in 1916, it was the Boondocks from 1934- 2005) now has 2000 Google employees across the street, giving the historic bar the customer base it needs to survive.

Even non-bar patrons will read Dineen’s book with a smile on their face and an increased appreciation for what a great city San Francisco remains. Readers will also love the book’s photos, which include some great neon signs (like the 1937 TRAD’R SAM sign at 6150 Geary).

Dineen has produced a social history at its best, and it’s perfect reading over a cocktail.

So whether it’s the Tenderloin, Chinatown, the pre-1973 Mission or the dive bars of all neighborhoods, pick up some books this holiday season to further appreciate the wonders of San Francisco.

Randy Shaw is Editor of Beyond Chron. He also writes about San Francisco in The Activist’s Handbook: Winning Social Change in the 21st Century