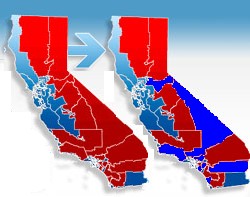 In 2007, right-wing political operatives tried to place a measure on the June 2008 ballot that – if successful – would have awarded California’s electoral votes by Congressional District. Democrats and progressives strongly opposed it, because everyone assumed it would give the G.O.P. presidential nominee an extra 19 votes. California is a deep blue state, but parts of Orange County and the Central Valley are still reliably Republican. New data from last November’s election, however, suggests that “Red California” is becoming less and less relevant. Barack Obama carried eight Congressional Districts that had long voted for Republican presidential candidates, and John McCain came close to losing three more. All these districts are currently represented in Congress by Republicans, but a few incumbents came close last year to losing to Democratic challengers. It’s only a matter of time before some of these districts will eventually flip. None of this is a surprise, however, because the state’s Republican base is older, whiter and shrinking in size. But the rate of this change is quite staggering, which explains why Republicans in the state legislature have clung to the “two-thirds rule” for passing a budget. After all, it’s the only reason they have any power left in the state.

Thanks to the work of bloggers at the Swing State Project, it is now possible to quickly check the results of the last presidential election by Congressional District, and compare it with 2000 and 2004. Congressional Quarterly even has a cool map that you can look at online. What it shows for the future of California Republicans is not pretty. None of us were surprised that Barack Obama won the Golden State by a 60-40 margin. But the bigger story here is that “Red California” has become far less Republican.

Take the 24th Congressional District, which includes Ventura County and inland parts of Santa Barbara County. The District is home to the Ronald Reagan Presidential Library in Simi Valley, the same town where an all-white jury voted in 1992 to acquit the cops who beat up Rodney King. Republican Elton Gallegy has been the Congressman there for 22 years, and he’s never had to deal with a tough challenger. In fact, the lines were drawn to intentionally give him a safe seat. But Obama won the District by a three-point margin.

Or how about the 48th District in Orange County – which includes Irvine, Laguna Hills and the mansions of Newport Beach? George Bush carried the District by a 20-point margin in both elections, but Obama won it by over 2,600 votes. Republican Chris Cox represented the District for years, and when he stepped down in 2005 successfully passed it on to a GOP successor. Democrats tried in 2006 and 2008, but Congressman John Campbell has so far managed to ward them off. Now, Irvine City Councilwoman Beth Krom has thrown her hat in the ring – and her campaign kick-off featured Loretta Sanchez.

When you look at the map, the most obvious change is the 25th District – which hugs a huge section of the Nevada border and includes Death Valley, before heading south to include parts of northern Los Angeles County. The City of Palmdale, home of the late anti-gay bigot Pete Knight is in the District. It’s always been a safe district for Republican candidates, but Obama managed to win it by a percentage point. Mormon Congressman Buck McKeon has had the seat since 1992, and has never had to worry about Democrats. That could change …

But can a candidate like Obama give “coat-tails” for Democrats in Red California? Ask Dan Lungren and Ken Calvert, two Republican members of Congress. When Lungren – the GOP’s losing candidate for Governor in 1998 – moved to the Sacramento suburbs to stage a political comeback, he decided to settle in a safe Republican district. Calvert has represented Riverside and Corona since 1992, and even survived a prostitution scandal early in his career to get re-elected – because the District at the time was so Republican.

For Lungren and Calvert, the state’s demographics are catching up with them. Obama won both of their districts, and both of them came extremely close to losing their jobs in November – when spirited Democratic challengers took them on. Both districts have had an influx of suburban sprawl, and now the headache of foreclosures has hit their communities hard. We’re seeing similar trends in Districts 26 in northern Los Angeles (Dave Dreier), 45 in Palm Springs (Mary Bono) and 50 in San Diego (Brian Bilbray.) Obama won all of these districts, and a strong Democratic challenger could benefit.

Granted, California still has Republican parts – and progressives were right to defeat the so-called Dirty Tricks Initiative to split up electoral votes by Congressional District. I have never liked the Electoral College’s “winner-take-all” system – where a state awards all of its electoral votes to the plurality winner. But until every state splits up their votes to ensure that every minority (not just California Republicans) has a voice in picking our next President, it is unfair and undemocratic.

John McCain won 11 out of California’s 53 Congressional Districts – which means that Republicans in the Golden State are still red, but not dead. But in three of them – George Radanovich’s 19th in Fresno, Ed Royce’s 40th in Orange County and Dana Rohrabacher’s 46th in Palos Verdes – the margin was surprisingly close. As the party keeps pandering to its Southern base, it will drift into oblivion in California. And if a measure to abolish the “two-thirds rule” in the state legislature passes, it will mean the death of the California GOP.