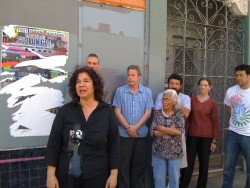 A San Francisco Superior Court judge will rule on summary judgment today for an Ellis Act eviction that could displace twelve tenants from a Mission apartment building. The families at 3465 19th Street (at Lexington) have lived anywhere from five to 32 years at the property, and have deep ties to the community. But the real scandal here is that the landlord, realtor Kaushik Dattani, entered in a risky predatory lending scheme with Circle Bank of Marin that virtually required mass displacement for it to make sense. In order to buy the building, Dattani took out a $1.296 million interest-only loan (at a whopping 9% interest rate) – with a “balloon payment” at the end of an eighteen-month period. Using the Ellis Act to kick out the tenants was simply a “soft cost” of doing business, as Dattani plans to sell off the units as “tenancies-in-common.” With the real estate market having crashed, Dattani cannot expect to sell the units as T.I.C.’s at a profit – which means the building will be vacant if the tenants lose their homes. And with the “balloon payment” having come due on April 1st, Dattani is likely to foreclose on the property.

The Ellis Act is a state law that allows owners to buy rental property, evict the tenants because they’re “going out of business,” and then re-sell each unit to the highest bidder. Yesterday, the tenants at 3465 19th Street – and some of their neighbors – rallied to save their homes, and denounce the risky high-stakes investor scheme that the landlord had embarked upon. All but one of the units are still occupied, because the Ellis Act gives senior and disabled renters one year to stay – as opposed to four months. The one tenant who had moved out (but lived there for 30 years), showed up to offer her support.

“The tenants are still in the building,” said attorney Steve Collier of the Tenderloin Housing Clinic, “and we’re here to condemn and protest this eviction. It is the same kind of risky real estate schemes that brought down our financial industry. The loan officer at Circle Bank of Marin [who brokered the deal] had predicted they’d make a 42% profit.”

Kaushik Dattani bought the property in September 2007 for $1.62 million – when the mortgage crisis had already started affecting the real estate market. Anyone who reads the actual terms of the agreement could see it was a high-stakes endeavor that would profit on the misery and relocation of low-income tenants in the neighborhood.

According to loan documents prepared by Mark Skolncik of Circle Bank, Dattani took out a $1.296 million mortgage – with an eighteen-month “interest-only” loan at a 9% interest rate (much higher than the standard mortgage rate of 6%.) The entire principal would come due April 1st, 2009 as a “balloon payment” – but the loan was structured in a way that presumed Dattani would have re-sold all five units by then at $3.325 million.

“Hard costs” (such as renovating the building) were taken into account, as well as “soft costs” – which included $71,000 in “Ellis Act” expenses. In other words, displacing the tenants was viewed as an incidental cost of doing business – while an abnormally high interest rate and a balloon payment could only have made sense if Dattani gambled that the real estate market would not collapse. But it did, and now he owes the bank a ton.

”I thought I had seen everything,” said a stunned Kevin Stein of the non-profit California Reinvestment Coalition when made aware of the plan’s details. “It’s a new wave of predatory financing and predatory equity schemes, where tenants are going to lose. When we don’t sufficiently regulate banks, the community suffers. We call on the FDIC to investigate whether such behavior is legal.”

The building is in sad condition, due to the property owner’s neglect – and a ground floor retail space has been vacant since Dattani first bought the property. “My husband and I have lived here for 22 years,” said Veronica Ruedrick, “and raised our son in this building. We have pride of tenancy, which is why it’s so disturbing to us that it’s in this shape. For us to be evicted at this time of the market, the building will likely be vacant.”

Other tenants being displaced include Hilda Lisa Vasquez, an 82-year-old who wakes up every morning at 6:00 a.m. to clean the adjacent sidewalk. Some of the residents who live down the block attended the rally to vouch for the tenants as good neighbors.

Ruedrick added that Dattani bought a building at 22nd and Bartlett – directly above the Revolution Café – and invoked the Ellis Act to evict the tenants. Those units, she said, have been vacant for a year. “No one in the community benefits when this happens.”

The tenants are represented by attorneys at the Tenderloin Housing Clinic, which can afford to take on such cases thanks to a $125,000 grant from the City. Ironically, Mayor Gavin Newsom has slated to cut this funding from the budget.

EDITOR’S NOTE: Beyond Chron is published by the Tenderloin Housing Clinic.