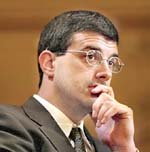 For the second straight year Thanksgiving week has seen an outpouring of grassroots activism. Last year the arena was the respective mayoral campaigns; this week the action was at City Hall, with hundreds turning out to stop a nonsensical zoning plan for Potrero Hill and to defend Chris Daly from political attack.

Monday’s hearing on Supervisor Maxwell’s interim zoning plan for Potrero Hill may have been a turning point for San Francisco. After Maxwell stated that her proposal was designed to expand desperately needed production, distribution and repair space (PDR) in the neighborhood, commercial real estate brokers testified that there is currently one million square feet of vacant PDR space in Potrero Hill alone.

Maxwell tried to deflect the entry of facts into her theory about the neighborhood’s needs by urging the brokers to work harder, but the point had already been made: the San Francisco of 2005 not only does not need more PDR space, but existing space cannot be rented even at pre-dot-com boom prices.

For years many progressives have fought to retain the city’s blue-collar industrial base. Activists lost this war back in the 1970’s, and for over thirty years have battled to preserve opportunity sites for industrial development.

But despite activists best efforts to stop the erosion of San Francisco’s blue-collar employers, the laws of the market have triumphed. As testimony made clear on Monday, successful San Francisco blue-collar businesses leave the city and move to areas with rail lines, ports and modern loading docks; contrary to Maxwell’s belief, increased land values is not the cause of their relocation.

The one million square feet of vacant PDR space in Potrero Hill is part of the four million in vacant PDR space citywide. It seems clear that businesses desiring a PDR use have plenty of locations to choose from in San Francisco, yet vacancies are rising.

San Franciscans pride themselves on basing decisions on facts, not faith. The facts are that the city is no longer a destination point for industrial users, but it is a highly desired locale for housing. We can pray all we want for a return to blue-collar San Francisco, but it’s not going to happen.

In a curious twist, Maxwell cited Bath and Beyond as one of the businesses concerned about rising land prices in Potrero Hill and the impact of land speculation on its ability to stay in the city. But the Supervisor did not mention that Bath and Beyond sold its building on Mississippi Street to the San Francisco Bay Guardian for a reported price of $4million, enabling the company to profit from increased land values. The business remains in the neighborhood.

Progressives should focus on maximizing affordable housing opportunities in industrial areas, rather than continue to deny the lack of demand in San Francisco for industrial space.

Daly Wins by Knockout: Tuesday’s Board of Supervisors hearing on Alioto-Pier’s effort to censure Daly was a classic political boomerang (see accompanying story). If the District 2 Supervisor’s goal was to invigorate both Daly and his base, she could not have done a more effective job.

I was there for nearly all of the testimony and did not see a single person of color testify against Daly. The anti-Daly speakers resembled attendees at the Republican Convention, though one took umbrage that he had been accused of being a Republican.

The hearing reminded me of the Gonzalez mayoral campaign in that it brought the locked out and disenfranchised into the city’s political life. The difference in the economic backgrounds of the pro and anti-Daly speakers was as stark as the racial distinctions.

It had to be obvious to even the staunchest opponents of Daly that the testimony in his behalf was straight from the heart. We’re not talking about the type of canned testimonials that surround political events—this was people telling the truth about how Daly has saved and rebuilt lives and how he has inspired others to political action.

With those who cared enough about the issue to come to City Hall overwhelmingly in Daly’s camp, Alioto-Pier turned to a San Francisco Chronicle poll that said the public strongly favored censure. But as the November election results showed, a Chronicle endorsement of a politician or issue is virtually the kiss of death, and no Supervisor was swayed by the paper’s view of Daly.

The tributes to Daly were so strong and went on for so long that you might have thought he had just died. But he’ll be back after the holidays, with his batteries recharged and as passionate as ever.