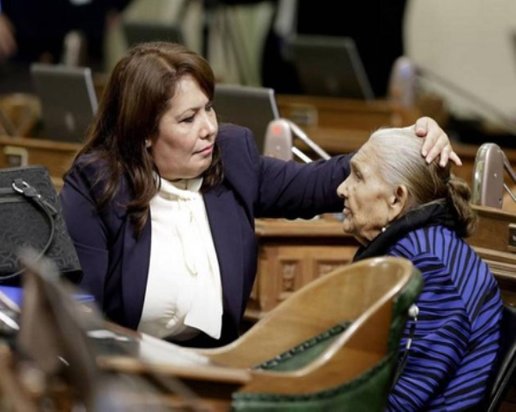 I am a Democrat—capital and small letter “d” and proud to be both. I believe in the democratic process, in representative government, in division of power, in government of, by, and for the people. We like to think that when we vote, our goal is to elect the best qualified of all candidates.

When the result is not always what we expected or wanted, I believe it would be a capricious and precipitous act to take steps to remove such a people from office before giving them a real opportunity to work out the kinks and prove themselves—some people do take a little longer to be effective than others. However, if we remain dissatisfied, we can always vote them out of office when they are up for re-election—unless, however, we find them guilty of misfeasance and malfeasance while in office.

Then we cannot afford to wait. Weighty decisions are in their hands, decisions that affect all of us directly and indirectly, now and into the future.

Such a situation has arisen in Assembly District 39 (where I live)! It has become obvious, almost from the start, that Patty Lopez (who won by less than 500 votes in the General Election but had lost by more than 30% in the Primary) is unqualified to fill that seat. A recall process is without question neither premature nor unwarranted. There are certainly a number of reasons to back up my statement:

Although she has lived in this country for more than 42 years (and has unsuccessfully taken ESL classes for 20 of those years), she is functionally illiterate in both English and Spanish. She dropped out of high school and eventually earned her GED but cannot read or write, particularly in English, at even an elementary school level. One of the least egregious examples of her inadequate education can be found on her Ballot Designation Worksheet (used for State filing purposes) on which she wrote “The reason I am choice this title [Educational Community Representative] is because I have been work, voluntter and this.” As a Progressive, I firmly believe in diversity with all its ramifications, but to be an effective legislator at any level requires fluency in the English language and the ability to communicate well.

There have been other situations that have demonstrated her lack of education. Her tribute on the floor of the State Assembly for the world-renowned gospel singer and activist, Andraé Crouch (who lived in her district) was embarrassing for her inability to read the honorific to the audience. Similarly, at a recent Martin Luther King, Jr., Day Breakfast, she awkwardly fumbled over the few words she had planned to say in honor of this Civil Rights leader.

Due to these limitations, Ms. Lopez has had to have an interpreter to translate into Spanish what crosses her desk and during her interactions with colleagues (including what is covered within the Democratic Caucus). One can only assume that it is because of these linguistic barriers that she skipped many (if not all) of the training and orientation sessions for all newly elected in the State Assembly; thus, she is completely unfamiliar with procedure.

Speaking of the Democratic Party, she, as an elected Democrat, is obligated to hire Democrats as her staff members. She has been in violation of this regulation. She has been repeatedly asked to adhere to the rules but has consistently refused. In fact, she hired Ricardo Benitez as her Field Representative (a known Republican with whom she ran a “joint” campaign when she ran for State Assembly and he ran against Bob Hertzberg [D] (the eventual winner) for State Senate.

For the most part, most of her staffers are nearly as incompetent and unorganized as she is. Her offices are in a state of chaos. I have sometimes been at events where her representatives have spoken on her behalf and what I have observed is almost scandalous for their lack of knowledge and experience. It is like the blind leading the blind. They rarely have answers to legitimate and thoughtful questions and don’t seem to know how to obtain the information, let alone get back to the constituent on the issue.

What is even worse (we can only infer) is that Ms. Lopez fired her chief of staff (soon after she took office) after she learned that he is gay. She had tormented him with untoward comments and finally let him go. Not long afterwards, he was interviewed by a KFI Radio reporter and shared with him that Lopez had told him, the then-chief of staff, that she believes that homosexuality is not normal and that she therefore feels uncomfortable being around him and having him work for her. This behavior is beyond immoral and unethical; it is, without question, illegal. For this alone, she should be removed from the Assembly! In fact, she is guilty of so many election and other violations (which the authorities are currently investigating) that it is hard to know where to start.

And on top of everything else, she surrounds herself with Tea Party Republicans and occasionally ultra-conservative Democrats (if there is such an animal). Having little experience herself, she has come to depend on their advice. She has already been fined $400 by the California Fair Political Practices Commission for failing to file campaign reports on time (or at all). Apparently, she does not want us to know from which companies, from what PACs, and from which people she gets her funding and, therefore, to whom she is beholden. She is guilty of a lack of transparency—something all of us must demand from our representatives.

Though she resists going on record on many consequential issues, when she does, her values do not coincide with those of genuine Democrats. It can be said, without exaggeration, that she is a DINO (Democrat in name only).

Furthermore, as of the penning of this column, she has introduced nary a bill in Sacramento (unlike so many other freshmen legislators). Because her colleagues are so aware of her significant shortcomings, she was not given a single chairpersonship, even for a sub-committee.

How did she get elected in the first place, one might reasonably ask? First of all, she lied about her ballot designation, having claimed to be an “Educator”—implying that she is a teacher in some capacity. Such a title is seductive to the average voter who might not otherwise be as informed as is advisable. At a time when her incumbent opponent was helping others win their respective races, she attracted the Republican voters in a race (because of the recently passed “top two” law) for which voters preferred casting their ballots in favor of the Right-leaning almost-Republican, instead of for the far more progressive genuine Democrat who has a lengthy track record of responding to the community and getting things done.

I know I may seem callous and may even come off as being a bit hurtful, but that is not my intent. I am only attempting to present an objective opinion of her unworthiness to hold office. There are an abundance of examples which display her lack of qualifications for this Constitutional position (one simply cannot expect to learn everything through on-the-job training). By and large, worthy office-holders must pay their dues first, gaining experience through working their way up the ladder. She has not done that. It should be understood and expected that lawmakers must have at least a modicum of experience and expertise to be able to hit the ground running once taking the office to which they have been elected.

Her community activism (which should be commended) has put her in the position of working with parents to improve their parenting skills. Yet, she earned the reputation there of being mean-spirited toward these well-meaning and well-intentioned adults, publicly demeaning them and repeatedly being found guilty of verbally abusing those who were there to learn how to become better parents.

She was fired from her post as Commissioner for a Councilmember from the City of San Fernando because of her incompetence and inability to carry out her assigned duties. She certainly has proven herself to be brutal even with her own staff—a quality we, as constituents, cannot and must not tolerate!

Sadly, she is also guilty of prevaricating about her actual income. She has been receiving government assistance (Federal and State funds run through the County) to take care of her aging mother. Eight hundred dollars a month seems like a pittance to most of us, but with all the apartment buildings she owns (transferring title to her husband to get around certain financial rules), she was doing well enough. However, though her actual gross Sacramento salary exceeds $100,000 a year, she is still allegedly receiving her $800 a month IHSS (In-Home Supportive Services) salary—a clear example of double-dipping. This set-up certainly smells to me!

It is ironic that her website demonstrates her opposition to the Affordable Care Act (from which so many of her constituents are getting health care for the first time) while at the same time receiving healthcare paid for by the State because of the position she currently holds (hopefully, not for long).

Democratic women’s groups have become skeptical about her views on abortion. For one reason, she has refused to answer any of their questionnaires on that and other subjects. It is believed she has expressed an anti-Choice position but denies it when it is conducive to do so and yet will not go on record to clarify where she stands on that rather contentious subject.

Furthermore, Ms. Lopez has displayed little understanding of the concerns her District has with regard to the design of the bullet train. A majority of her constituents want the tracks placed underground as it travels through the region. They are concerned about a physical division within the community should the tracks remain above ground. Many also worry about safety, environmental impact, traffic, and other significant issues that would affect the quality of life within District 39.

It is more than unfortunate that she is over her head. I would almost feel sorry for her except she deliberately deceived her friends, neighbors, and colleagues about who she really is. I think we still don’t know! Ms. Lopez has become an embarrassment to the neighborhood that sent her to Sacramento. Her actions there reflect poorly on the community and adversely affect its reputation.

It is seriously time to consider a recall. I don’t suggest this lightly. We cannot wait two years down the line for a chance to rectify the results of misplaced trust and uninformed voting. This conundrum is also another reminder why every vote does count and why each ballot must be cast by an informed elector.

Published with the author’s permission from CityWatch