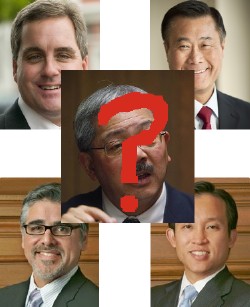 While San Francisco voters are still less focused on the San Francisco mayor’s race than in prior open seat contests, recent developments have altered the contest. First, John Avalos has effectively and efficiently consolidated the progressive base less than two months since announcing his candidacy. Second, David Chiu has significantly weakened his chances by providing the deciding vote on the Parkmerced development, and by leaving tenant advocates believing that he cannot be trusted on tenant issues outside his Chinatown-North Beach base. Third, while Dennis Herrera or Leland Yee have secured key endorsements and are building lists of supporters, one finds little new grassroots excitement for either campaign. The lack of a clear frontrunner explains the push to get Ed Lee into the race, as his solid performance as interim mayor would make him the instant favorite should he run.

I have not addressed the San Francisco mayor’s race since encouraging John Avalos to run on April 14, finding the race too fluid to make any meaningful assessments. It’s also clear that unlike the open seat races in 1987, 1995 and 2003, this contest has yet to galvanize voters – who are either focused on state and national budget issues, international struggles for democracy, the soap opera season of the 2011 Giants, and/or still suffering burnout from the 2008 Obama campaign.

But recent events are starting to define the field. And here’s what they mean.

When John Avalos announced his candidacy, few if any political insiders gave him much of a chance. But Avalos has quickly consolidated progressive support, is running a highly visible campaign (whose signs wisely feature San Francisco Giants colors), and has created the sense of representing a movement rather than simply a political campaign.

Avalos’ challenge has always been to secure the non-progressive voters necessary to win a citywide race. This requires framing himself as the only outsider in a race of establishment candidates. Whether he can accomplish this remains an open question, but by consolidating the progressive base so quickly he can prioritize building support among more moderate voters.

Until his support for the Parkmerced development, I assumed David Chiu would either split the top San Francisco Tenants Union endorsement with Avalos or at worst be a highly regarded second choice. Now, I suspect Chiu will be lucky to get a third choice (after Herrera) and that he will get little tenant or progressive support outside Chinatown/North Beach.

Although it’s only June, I have no hesitation stating that Chiu’s Parkmerced actions – which include not only his vote but his concealing 14 developer-approved amendments from tenant advocates and his progressive Board colleagues until the day of the vote, and then preventing them from being subject to a public hearing –leave him unelectable in November.

We have all worked for candidates who ignore their base after getting elected, but Chiu is showing even prior to becoming Mayor that he will take actions without consulting those whose votes he seeks. His Parkmerced vote was not only wrong on the merits – and Tenant Together Director Dean Preston’s insightful and comprehensive analysis of the project’s defects are available here, here and here – but it undermined the broader sense of trust that voters want to feel toward the politicians they support.

I don’t see any voters going to Chiu because of his Parkmerced vote, but a lot who would have backed him will now move to Avalos and Herrera. And the moderate Asian-American voters who Chiu needs to take from Yee do not care about Parkmerced, so Chiu’s actions have no political upside.

While Dennis Herrera and Leland Yee secure endorsements, neither is breaking from the pack.

Herrera was making good strides until he found himself attacked last month for an alleged lack of integrity stemming from the Alex Tourk “lobbying” allegation, as well as for various legal opinions given by the City Attorney’s office, including that regarding city pension reform.

These attacks on Herrera’s integrity appear calculated to undermine perhaps his greatest strength, and while Herrera has only himself to blame for hiring Tourk, he is widely known as an attorney of unimpeachable integrity. As City Attorney, Herrera has invariably has made some tough calls that anger those on the other side, but claims that he makes politically motivated legal decisions are easily disproved by his outstanding record in the trial and appellate courts.

Unfortunately, anecdotal evidence tells me that these well-coordinated attacks on Herrera’s integrity have slowed his momentum. This will likely be forgotten when voters start paying attention to the race in September, but that so many are willing to believe he lacks integrity shows that Herrera the politician remains a little known commodity to much of the electorate.

I have not seen Leland Yee’s campaign bringing in new constituencies during the past months. Yee has secured endorsements of longtime backers at the California Nurses Association, but his Sierra Club endorsement was somewhat tainted by allegations that it’s part of a deal whereby Mayor Yee would appoint the Sierra Club’s John Rizzo to the District 5 seat vacated after Ross Mirkarimi’s likely election as Sheriff.

Yee is a relentless campaigner, and it may be that he has been hampered by having to spend so much time in Sacramento. He also retains a lock on moderate and conservative Asian-American voters, and remains the favorite of the real estate community that has long provided key funding for his campaigns.

But given how hard and for how long Yee has campaigned, his inability to expand upon his original base raises concerns.

Based on his performance as mayor, if Ed Lee runs for mayor he wins. Lee’s campaign would look a lot like the 1987 Agnos coalition and the 1995 Brown campaign, and he would win votes throughout the city and likely even defeat Yee among Asian-Americans.

Lee insists he is not running, and many believe that a change of course would destroy his credibility. But political history says otherwise.

In 2009, Mayor Bloomberg won a third term as New York City’s mayor after pledging to abide by the two-term limit. Many Congressional Republicans continued to win victories after pledging in writing before the 1994 elections to limit their tenures to three terms.

To take an even more extreme example: Canada’s Conservative Party won a sweeping victory last month despite having previously been found sending a compromising but fraudulent photo of a rival presidential candidate to the media. Pundits mistakenly thought this would hurt the Party’s credibility, but voters did not care about the dirty campaign trick.

San Francisco voters will elect a new mayor who they believe will best advance and manage the city. If Ed Lee is in the race, he will be judged on these criteria, not on whether he broke a pledge to solely be an interim mayor.

And just as Avalos’ entry into the race has made it much more interesting, Ed Lee’s candidacy would instantly make the mayoral campaign the talk of the town.