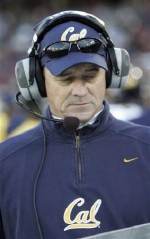 As another Big Game approaches, it is time to revisit some core assumptions about Cal football coach Jeff Tedford. For example, if he really is a quarterback “guru,” why has Cal failed to have effective play at that position since 2004? And if really is an offensive “genius,” why has the team’s offensive performed so poorly the past few seasons? Tedford clearly turned around a dismal Cal program, and I was among the many Cal fans that once viewed him in Bill Walsh-like terms. But four years of disappointing performances fit a pattern, and Tedford’s capacities appear to have been greatly overestimated.

Tedford won fame as a quarterback guru after mentoring Trent Dilfer at Fresno State, Akili Smith and Joey Harrington at Oregon, and Kyle Boller at Cal. Some credit him for Aaron Rodgers, but he arrived at Cal as a JC transfer and then left after one year.

But since Rodgers’ departure, Cal fans have suffered through Joe Ayoob, Nate Longshore and Kevin Riley. All three quarterbacks appeared to regress under Tedford’s tutelage, Riley most of all.

The result? Cal has lacked a stellar quarterback despite Tedford’s reputation.

Meanwhile, Oregon, who once employed Tedford, still finds ways to get good quarterbacks. Last year, it has Bay Area product Dennis Dixon, who Cal passed on but might have take the Ducks to a national title had he not gotten injured.

Bottom Line: Tedford has not recruited a successful freshman quarterback during his entire tenure at Cal.

The Cal Bears have been devoid of offense for years, despite having top draft picks at the running back and receiver positions. Tedford used to have the offensive creativity of a Bill Walsh; now its Mike Nolan whose offense most comes to mind when discussing the Cal Bears.

Tedford has brought in a successive of coordinators to call plays, but with no improvement. The team is in a multi-year offensive rut with no end in sight.

As long as Cal fans are happy to see improvement over Tom Holmoe, Tedford is set for life. But the program is going in reverse, Cal is further than ever from a Rose Bowl, and, for my money, if Auburn or Tennessee wants Coach Tedford, I’d wish him well and get a coach who can reenergize the program.