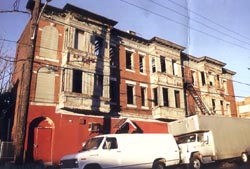 The San Francisco Association of Realtors have mailed a large piece attacking Prop H, which provides relocation assistance to tenants evicted for no fault of their own. According to the Realtors, Prop H will turn such neighborhoods as North Beach, Noe Valley, the Castro, and the Marina into “rundown” areas with dilapidated buildings. As the adjacent picture from the mailer shows, the Realtors also claim that granting tenants adequate relocation expenses will beset San Francisco neighborhoods with vacant buildings lacking windows and even roofs. The photo used by the Realtors to show “what you see is what you’ll get” if Prop H passes shows a building whose location, and connection to tenant relocation costs, is not disclosed. Its condition is certainly atypical among San Francisco rental housing, and looks like a building in Detroit. Can someone clear up this mystery?

Realtor interests are pouring money into a late effort to defeat Prop H, which ensures adequate relocation payments to tenants evicted for no fault of their own. The most recent mailer echoes a theme that was a staple of anti-rent control campaigns from the 1970’s and 1980’s—the notion that protecting tenants destroys housing and neighborhoods.

Landlord groups stopped using this theme after it became clear that the rent-controlled communities of San Francisco, Manhattan, West Hollywood, and Santa Monica were flourishing. Now with San Francisco rents soaring and the city’s housing stock in greatly improved condition, the Realtors are trotting out the old falsehoods in the hopes of confusing voters.

What’s particularly bizarre about the Realtor’s campaign piece is that the building looks like the kind of structure commonly seen in Philadelphia, Cleveland, Detroit, and other cities without rent control. The only time a building like this appears in San Francisco is after a fire, and Prop H does not cover relocation expenses for fire victims.

The Realtor’s mailer also argues that Prop H impacts the cost of making repairs. But the measure has nothing to do with repairs. It covers evictions attributable to major renovations, but even the Realtors cannot honestly believe that the $1000 payment enacted in 1987 should not be increased.

Most voters will conclude that since rents have increased since 1987, so should tenant relocation payments.

Similarly, the Realtors claim that Prop H penalizes landlords who want to seismically upgrade their properties. But the vast majority of residential upgrades have already been completed, and the process resulted in almost no tenant evictions, as landlords moved tenants within the building as work on their units occurred.

The Realtors anti Prop H mailing reflects a group whose scare tactics no longer resonate with San Francisco voters. With even Supervisor Bevan Dufty endorsing Prop H, this is not an initiative that anyone will view as a radical attack on San Francisco’s neighborhoods.