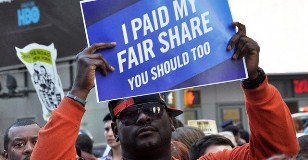 The EU has passed a financial transaction tax. What’s America waiting for?

Last week, 11 European nations forged ahead to create a new tax while American Republicans walked backward into a no-new-tax trap. On Jan. 22, the European Union gave 11 member countries—including economic giants Germany and France—permission to institute a financial transaction tax, a tiny fee charged on trades of stocks, bonds and other financial instruments. On the same day, U.S. House Speaker John Boehner announced that he’d given failed Republican vice presidential candidate Paul Ryan the task of preparing a budget that would end the federal deficit within a decade—without new taxes.

That stuck Ryan with grim choices. He can break America’s decades-old pledge of decency to the aged and infirm through Medicaid, Medicare and Social Security. Or he can break the Republican pledge of no new taxes. Republicans put themselves in this position because they don’t understand Americans—hard-working people the GOP standard-bearers called “takers.” Republicans do this to themselves because they don’t understand how much Americans rely on and plan their lives around the promise of Medicare and Social Security. They do this because they don’t have a clue that Americans would gladly impose a financial transaction tax on the Wall Street speculators who caused the Great Recession, which bloated the deficit.

Two Democrats have for years proposed a financial transaction tax for the United States. Iowa Sen. Tom Harkin and Oregon Rep. Peter DeFazio would charge 3 cents on every $100 worth of stocks, bonds, derivatives and other Wall Street transactions. That would raise $35 billion a year. The 11 European countries plan a higher tax—10 cents on every $100. If the United States instituted a financial transactions tax matching the European rate, it would raise more than $100 billion a year, which would go a long way toward ending the deficit.

The Wall Street crisis caused the large federal deficits over the past four years, Nobel Prize winning economist Paul Krugman has repeatedly pointed out. During the Great Recession, high unemployment reduced the tax dollars the government received while at the same time the government paid out more for relief programs like unemployment benefits.

American taxpayers, who suffered job loss and foreclosure as a result of Wall Street recklessness, would love to charge financial speculators 3 cents on $100 in trades. They’d be happy to impose the tax that would chill market-endangering financial speculation and high-speed trading. They’re all for restoring a tax that the United States charged for 50 years during its greatest economic expansion and that 30 nations still charge in one form or another today.

Republicans and business lobbyists like the U.S. Chamber of Commerce wail that no tax should be exacted from the “fragile market,” but they’re eager to impose devastating cuts to the fragile household finances of elderly and infirm Americans.

Ryan’s last budget took nearly 30 years to end the deficit. That plan would have slashed and burned programs for the middle class. It proposed cutting $800 billion from Medicaid and turning the program over to the states. It called for cutting $716 billion from Medicare and voucherizing it, a change that would cost each senior citizen thousands of dollars each year. It would have cut $130 billion from food stamps. Its cuts to Pell Grants would have denied tuition help to 1 million college students.

And the Ryan plan included big tax breaks for the rich.

This time, the wealthy won’t get those discounts. The Bush tax breaks for the rich ended January 1, and Ryan said he would not restore those lower rates in his new budget plan. The $630 billion that will come from reestablishing Clinton era tax rates on the rich as well as the billions in benefits from the improving economy will give Ryan a little wiggle room he didn’t have last time.

But ending the budget deficit within a decade without raising taxes would cost the middle class dearly. Republican Rep. Cynthia Lummis of Wyoming acknowledged that, contending Americans want to sacrifice. She said:

She added that she’s rip-roaring ready to sacrifice herself. Of course, “sacrifice” for her is cushioned by big piles of greenbacks since she’s a 1 percenter, a multi-millionaire like Ryan. Just the $174,000 a year they receive as pay for their jobs in the U.S. House provides a softer cushion than the $50,000 a year earned by the average guy whose throat those Republicans want to shove sacrifice down.

Lummis and Ryan don’t live like average Americans. They don’t understand average Americans. And, similarly, Lummis, Ryan and many Republican politicians misconstrue what average Americans did to George H.W. Bush. He was the Republican who promised “Read my lips: No new taxes,” in his nomination acceptance speech, who won the presidency on that pledge and who then turned around and raised taxes.

Bush went down to defeat when he ran for re-election. But it wasn’t because he raised taxes to help close a budget deficit. It was because average Americans couldn’t trust him. The taxes weren’t the problem. It was the broken pledge.

It was a promise he never should have made. Just as Republicans should not be making that vow again. Especially if the promise means that to end the deficit in a decade they’ll break America’s solemn pledges to its elderly, its infirm, its veterans and its impoverished children.

To equitably reduce the deficit in a way that maintains good faith with the American people requires tax increases. And matching the European financial transaction tax is a good place to start. Yes, new taxes are necessary. Especially those focused on the speculators who caused the crash.

Leo Gerard is the president of the United Steelworkers International union, part of the AFL-CIO.

This piece first appeared in inthesetimes.com