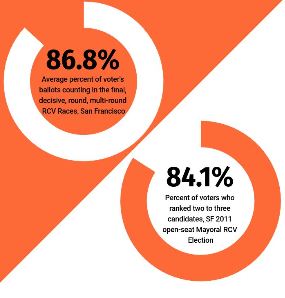 I recently published a detailed outline of what to expect in the June 2018 mayoral election where I examine turnout and assess how likely ranked choice voting (RCV) will play a role. This piece is a follow up to that post.

Now that the field of mayoral candidates has been determined, the dash to a June victory for these candidates will largely be determined by the usual qualities, such as their campaign message, voter turnout and outreach. But even more important will be the ability of the candidates to reach beyond their own natural political base and build a coalition of voters that launches one of them across the majority threshold (50% + 1 more vote) necessary to win.

Here are some important things to know about ranked choice voting (RCV) and the mayor’s race.

San Francisco has utilized ranked choice voting (RCV) as the method of election for most of its offices since 2004. Under RCV, voters use a ranked ballot to mark their preferences among candidates. All voters get one vote, they pick a favorite, and at the same time indicate their runoff choices. These rankings determine whom their vote goes to next if their top choice can’t win. It’s an “instant runoff” where a majority win can be reached in one visit to the polls instead of two. Voters don’t have to worry about “splitting the vote” among candidates from the same community or voting for a “lesser-of-two-evils.” Voters can vote their true preference, including ranking a second- or third-choice so their vote is not wasted.

It’s important to realize that, in the instant runoff, “lower choices” (second- and third-choices) cannot help defeat your “higher choices”. There is no reason not to use all of your rankings. This is because your vote only moves to your lower ranked candidates when your higher ranked candidates have been eliminated from the race.

RCV is not a sports poll or the type of election method where you can “plump” your votes to one candidate. Ranking the same candidate three times on your ballot does not help your favorite candidate, it just keeps you from having a backup choice in case your favorite can’t win. .

In San Francisco, RCV has been working very well since 2004. Far more voters participate in one decisive election, rather than two elections. Research and analysis of past elections and how voters have used their rankings show that voters are fully utilizing their ballots. As a result, there is greater diversity among office holders. In San Francisco today, seven out of 11 members of the Board of Supervisors are people of color and six are women; for the seven citywide offices elected using RCV, six are leaders of color (that includes recently deceased Mayor Ed Lee). RCV has dramatically increased the diversity of elected leadership in San Francisco.

Some people have a misperception that San Francisco voters, especially certain voters of color, don’t take advantage of ranking their ballots, and so are disadvantaged by the system. This is inaccurate. In competitive races, like the 2011 mayor’s race, the data shows that 84.1% of voters ranked two or more candidates. With eight candidates in the race, we anticipate at least 75% of San Francisco voters will be ranking a ballot.

The figure below tracks the ranking patterns of every RCV race that has taken place in San Francisco that involved an open seat and more than 3 candidates, such as the mayoral race this June. Across this subset (20 out of 68 RCV races that have occurred), the average percentage of ballots with at least 2 rankings is 75%. 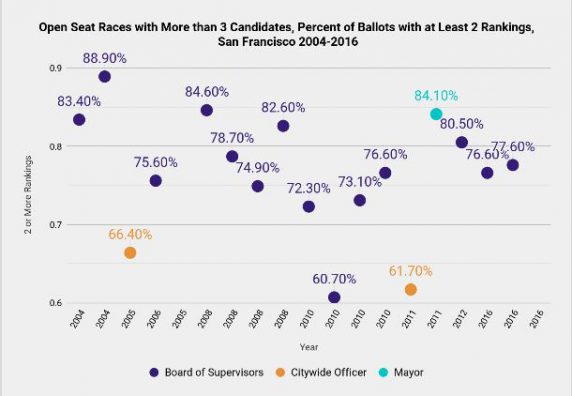 The notion that minority voters do not rank their ballots is untrue. For example, a study conducted by San Francisco State University professor Richard DeLeon using precinct to data showed that there is no proof that Asian American voters had more difficulties with ranked choice voting than other racial groups, including white voters. Further, SFSU Professors Francis Neely and Corey Cook found that, “the tendency to rank three candidates was consistently more common in precincts where more Asian Americans reside.”

To dismiss a significant voter base on the myth that they won’t rank a ballot would be incredibly unwise. Most voters rank a ballot, and leading mayoral candidates will need to engage with the diversity of the broader voter base in order to secure a win.

How important will ranked ballots be? A FairVote study has found that with RCV, far more voters participate in the final, decisive round than in any other method (such as a separate runoff or a primary followed by a general election, like Top-Two). Our research showed that nearly 87% of voters have had their ballots count in the final round of RCV contests.

With RCV, turnout has generally been much higher because elections are typically held in November — when turnout is highest. Because of this, RCV elections are generally more representative of the electorate than a separate runoff — like the old December runoff system in San Francisco. We found that the median turnout decline for local runoffs between 2000 and 2003 was 39.5%, meaning just three in five as many voters turned out in the decisive runoff round.

FairVote California studies the election history of RCV races and we’ve observed that winners of RCV elections are those candidates who have both a strong core of support and a broad base. Candidates need both to win.

If a candidate only has a strong core of support, she or he will fail to pick up enough second- and third-rankings from the supporters of other candidates to gain majority support. In fact, the Bay Area has seen seven races where the candidate who had the most first votes initially was defeated because that candidate was polarizing – she/he had a strong core but not a broad base of support to win. That’s how Oakland councilwoman Jean Quan beat former state senate leader Don Perata in an Oakland mayoral election in 2010, despite finishing second in first rankings. Perata didn’t reach much past his base to pick up second- and third- rankings, while Quan said to voters, “Hey, if I’m not your first choice, I’ll take your second or third.” We call this a “comeback win.” They don’t happen often, but when they do it’s because the initial front-runner does not have broad enough support.

Reports from a recent poll suggest that frontrunner Mark Leno is most likely to be ranked by 45% of polled voters, with 31% of voters ranking Breed, with the rest largely undecided. It’s still early in the race, but from this we can say that it will likely be the case that no candidate will initially gain majority support and win in the first round of the RCV election. Simply put, these candidates will not be able to win by relying solely on their own core constituencies.

So in order to win critical crossover support, candidates must conduct meaningful community outreach. These candidates will have to build coalitions and try to win the second- and third-rankings from the supporters of other candidates.  These candidates will have to attend community forums and conduct door-to-door, face-to-face interaction to convince voters. Leno, Breed, Kim, and all aspiring candidates will need to engage with the broader voter base.  Because it is a RCV election, expect to see campaigns that are more focused on issues and values rather than mudslinging — it’s these elements that voters often look to in a candidate.

And that will be a good thing for democracy.

The current front-runners, Leno, Breed, and Kim, all have citywide name recognition. Alioto will also have some name recognition because of her years on the Board of Supervisors (which ended in 1997) and her father’s years as San Francisco mayor (until 1976). With none of the leading candidates polling near the 50% mark, all will have to try to find a degree of common ground among their competitors to get the trailing support of second- and third-rankings that will determine the winner.

There are a number of lesser-known candidates, like Amy Farah Weiss, who led an RCV strategy during the 2015. Although candidates with less name recognition will likely be eliminated early in the instant runoff, if the election is close then it is possible that candidates like Weiss will play an influential role.

Take for example, the 2016 District 1 race. In that race, Supervisor Sandra Lee Fewer led in the first round with 39.6% of first choices and Marjan Philhour came in second with 35%. This was a very competitive race. When the trailing candidates were eliminated, Sandra Lee Fewer picked up more votes than Marjan Philhour. In the final tally, Fewer emerged with 52.7% of the vote to Marjan Philhour’s 47.2% — a 413 vote spread.

Despite being outspent by third-party expenditures, what kept Fewer in the lead was her broad support and the second- and third-choice support of those who preferred other candidates, like David Lee, Jonathan Lyens, and Andy Thornley.

It will be important for leading candidates to engage the voter base of lesser-known candidates. 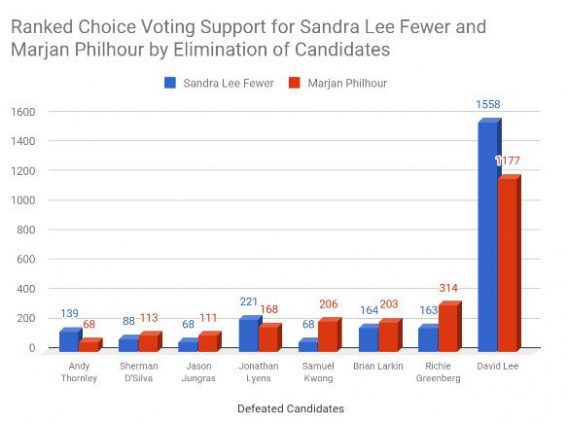 This June, two of the four leading candidates will be eventually eliminated in the later rounds of the instant runoff, and the other two will finish in the top-two. One of these will win and be elected as San Francisco’s new mayor. Whoever wins, one thing will be sure: that will be the candidate that generated a broad base of support and was able to build coalitions among the various constituencies, communities and neighborhoods of San Francisco.