by Richard DeLeon, Chris Jerdonek and Steven Hill on February 13, 2006 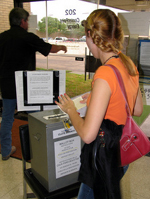 Recent studies of local election results in 2004 and 2005 (posted at www.sfrcv.com) show that the introduction of ranked choice voting in San Francisco is off to a good start. The shift from December runoffs to RCV has saved millions of taxpayer dollars, and voter participation was much higher and more inclusive than would be expected using the old runoff system. The voters themselves, when polled, overwhelmingly preferred RCV to the old December runoff system.

We can understand the impact of RCV by making a before-and-after comparison of two recent elections:

In December 2001, San Francisco paid approximately $3 million to hold a runoff election in which 70,000 voters, only 17 percent of those registered, turned out to elect the city attorney. Turnout plunged all over the city, especially in minority precincts.

In November 2005, approximately 200,000 registered voters turned out to vote for city attorney, treasurer, assessor-recorder and various ballot propositions. Thanks to RCV, there was no need to hold a December runoff for assessor-recorder, the only race that did not produce a majority winner in November.

Instead, the “instant runoff” system was activated, resulting in Phil Ting being elected as the majority winner in a single election. Two hundred thousand voters cast a first-choice ballot, and a full 190,000 of them [95 percent] saw their ballots count in the decisive instant runoff round. That means 120,000 more voters decided the contest between Ting and second-place candidate Gerardo Sandoval than likely would have turned out in a December runoff. The reason is simple. Returning to vote in a second election requires much more time and effort than voting once and ranking your favorite candidates in a single RCV election. Using RCV resulted in nearly a tripling in voter turnout in the decisive contest, and taxpayers saved $3 million by not paying for a second election.

Let’s look more closely at the assessor-recorder’s race. Leading candidate Ting won 47 percent of the first rankings, missing the required majority. Without ranked choice voting, Ting and second-place finisher Gerardo Sandoval would have faced off in a second, December runoff, costing millions of dollars to pay for the second election even as voter turnout plummeted.

Instead, with RCV last-place candidate Ron Chun was eliminated, and his supporters had their ballots count towards their next ranking as their runoff choice. Statistical analysis of anonymous records of voters’ rankings (available from the Department of Elections) show that over 70 percent of Chun’s supporters ranked a second choice. Chun’s supporters preferred Ting over Sandoval by a 2-to-1 margin. Overall, Ting won 58 percent of the ballots in the final “instant runoff,” giving him a solid win (in fact, Ting won a 55% majority of all voters as indicated by the first-round total).

A strong coalition of Asian voters clearly was decisive in electing the winner. Even though major Asian organizations split on their endorsements (Chun was backed by the Chinese American Democratic Club, Ting by the Westside Chinese Democratic Club), the Asian vote did not split, thanks to ranked choice voting. Asian voters used their ranked ballots to form their own informal Asian voter coalition.

In addition, while all San Francisco neighborhoods benefited from this boost in voter turnout, the six neighborhoods benefiting most had the highest concentrations of racial minorities. In order, the top six neighborhoods were Visitation Valley (307% increase, more than quadrupling voter participation), Bayview/Hunter’s Point, Mission, Ingleside, Excelsior/Outer Mission, and Western Addition (210% increase). Together these six neighborhoods alone had more than 35,000 additional voters casting a vote in the decisive runoff round, showing how RCV can empower minority voters and produce a more racially diverse electorate.

In addition, the Public Research Institute at San Francisco State University conducted an exit poll survey of precinct and absentee voters in the 2004 RCV elections. The results are encouraging. The vast majority of voters — 86 percent — reported that they understood ranked choice voting. Many more voters (46% vs. 3%) felt they were more likely to vote sincerely (i.e. for their favorite candidate instead of the “lesser of two evils”) using RCV than the old December runoff system. And after using it, 61 percent said they prefer RCV to the former runoff system, with only 13 percent preferring the old runoff system.

What all these numbers reveal is that San Francisco has made the transition to ranked choice voting with a remarkable degree of success. Still, public education should continue, with a focus on those communities who have adapted more slowly. With the City saving millions of dollars each year by not holding a December election, it would be good public policy to commit some of the savings to RCV education to ensure that all communities are using RCV as effectively as possible.

Rich DeLeon is professor emeritus of political science at San Francisco State University, Chris Jerdonek is a representative of FairVote in California, and Steven Hill is director of New America Foundation’s political reform program. To view the studies cited in this article, visit www.sfrcv.com