Randy Shaw Signs and Discusses “The Tenderloin” August 5 at Books Inc. in Berkeley 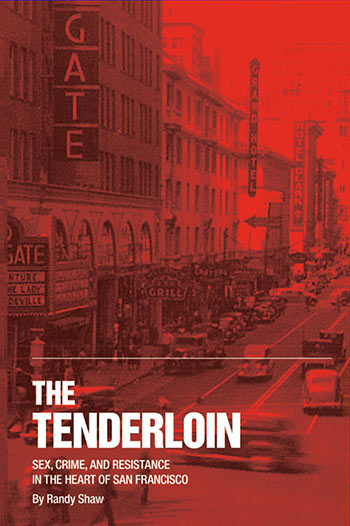 “If you want to understand San Francisco’s Tenderloin, you must read Randy Shaw’s book.”—-Dave Eggers

I will be discussing my new book, The Tenderloin: Sex, Crime and Resistance in the Heart of San Francisco, at Books Inc. in Berkeley on August 5 at 7:00 pm. It is free to the public.

Described by Gary Kamiya as “a lively and opinionated history of one of the most fascinating neighborhoods in the world,” my book addresses one of the core mysteries of San Francisco: how has the Tenderloin remained a primarily low-income, ethnically diverse neighborhood in a city of vastly increasing wealth?

Having worked in the Tenderloin for 35 years I thought I understood how the neighborhood survived. But I only knew how the Tenderloin survived since 1980. The story that had not been told was how it remained low-income for the preceding decades despite powerful real estate and political pressures pushing for its transformation.

The Tenderloin was once the San Francisco neighborhood that came closest to being the “Paris of America.” It had some of the finest restaurants on the West Coast, and its upstairs and cordoned off rooms allowed activities that also characterized Paris’ Moulin Rouge.

Women working in nearby Market Street retail stores often lived in the Tenderloin’s SRO hotels. These women practiced a level of independence not seen in the rest of the city or much of the nation until a decade later with the 1920’s “flappers.”

The Tenderloin launched the city’s gay and lesbian civil rights movement, which emerged from its gay bars.

Those interested in how the Tenderloin built the city’s LGBT movement from WWII through the 1960’s are encouraged to attend an event with Martin Meeker and myself at the Tenderloin Museum on August 6 at 7pm. Meeker, author of Contacts Desired: Gay and Lesbian Communications and Community, 1940s-1970s, uncovered a lost history of gay and lesbian activism in the Tenderloin that put the neighborhood on the national map.  Event details at http://tenderloinmuseum.org/events/ .

My book also describes how the Tenderloin was San Francisco home for jazz legends like Miles Davis and Dave Brubeck, and was the neighborhood where the Grateful Dead, Crosby, Stills, Nash & Young, Credence Clearwater Revival and other rock groups recorded their first big hits.

Dashiell Hammett created his noir vision from a Tenderloin apartment, and Frank Capra lived in the Tenderloin’s Drake Hotel when he got his first movie director’s job.

The Tenderloin is the story of a neighborhood that has persisted against all odds. I look forward to discussing its past and future, as well as the new Tenderloin Museum, at Books Inc in Berkeley this Wednesday night.