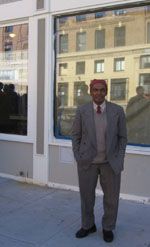 Standing on the roof of the recently opened Raman Hotel, squinting into the bright light of a surprisingly sunny day, formerly homeless senior Mary Mallaro had two words to describe how she felt about her new home here: “I’m happy.”

After more than a year of living in a shelter, Mallaro recently moved into one of the Raman’s 85 units of new supportive housing created primarily for seniors trying to come in off the streets. With hardwood floors in the lobby, a community kitchen, bay windows, a roof garden, and on-site case managers, the hotel represents another important step in San Francisco’s efforts to eliminate homelessness.

City officials, non-profit leaders, and some of the building’s new tenants celebrated the opening alongside Mayor Gavin Newsom at a press conference yesterday. The mayor highlighted the Raman as another victory in his quest to solve homelessness, saying that it’s opening brought the city one-third of the way towards his ten-year plan to provide 3,000 units of supportive housing.

The Tenderloin Housing Clinic will be leasing and managing the hotel, which it renamed “the Raman” after the hotel’s owner, Raman Patel. Patel is a deeply spiritual man who has dedicated his life to helping the poor, and has also leased the Hartland and Seneca Hotels to the Clinic for housing homeless persons. In addition to his work in San Francisco, Patel has helped build several hospitals for the poor in India.

“It’s been a lot of sweating, a lot of time to get this place open,” said Raman. “My son worked day and night helping. I’m so glad it’s finally ready.”

Patel’s son Dipak renovated the hotel, a $1.1 million dollar effort that included the addition of a new floor, the installation of a new elevator (the building previously only had stairs) and a rooftop deck with 360 degree views of the city. The hotel had been damaged by fire prior to the renovation, and some of the tenants displaced by the fire have now returned to much more beautiful surroundings at their prior rents.

City officials from the Department of Human Services said the Raman’s on-site case management continued a model of supportive housing for the formerly homeless that has proven to work. In particular, officials cited statistics that since Newsom’ s “Housing First” initiative had been launched, 95 percent of homeless people that entered permanent housing remain off the streets.

“We know how to end homelessness in San Francisco,” said Darius Kayhan, Director of Housing and Homeless Program. “We have redirected the way we can solve this crisis.and things look a bit better.”

Newsom and Kayhan said prioritizing the Raman for seniors came in response to a variety of senior activists pushing for a place primarily for them. The transition from shelter to permanent home, they said, was a difficult one, and having a place where they could be around other seniors going through the same problems might make it easier.

For Mallaro, so far it’s been working.

“It’s just so much better than the shelter,” she said. “I’ve got big bay windows, up on the third floor. Finally, some peace and quiet.”