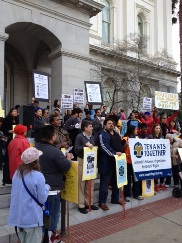 Over 500 tenants and supporters rallied at the California state capital building on February 18 in the largest statewide tenant rally in decades. Their message was clear: the Ellis Act is being flagrantly misused, and stopping speculator evictions requires a five year ownership holding period prior to invoking the Ellis Act.

It was quite a scene at the state capitol yesterday, as San Francisco supervisors, tenants, and activists held a political reunion eighty miles from City Hall. Supervisors Avalos, Campos, Chiu and Kim all attended and spoke at the rally, while Chiu also joined the marchers as they chanted songs and rallying cries. A long line of marchers circled the capital grounds before concluding at the capitol steps.

Organized by the statewide tenants group Tenants Together, the rally was unlike anything previously held for Ellis Act reform. I was involved in these prior successful efforts, but in the late 1990’s and in 2003 Ellis evictions were not as much on the radar screen. Our strategy was to keep a low profile to avoid triggering massive realtor opposition.

In 2014, Ellis Act evictions are at the heart of San Francisco’s housing crisis, and it takes a movement to win necessary reforms. That’s why the Sacramento rally was both strategically and politically essential: it sent an early message that San Francisco has come together for the first time to demand changes to the Ellis Act in Sacramento.

The Politics of Reform

As State Senator Mark Leno, the key leader in the Ellis Act campaign, and others made clear, the best solution—repealing the Ellis Act—is not politically viable. The next best solution, requiring a five-year holding period before invoking Ellis, would stop the common practice in San Francisco of owners buying buildings and then “going out of the rental housing business” the next day by issuing Ellis eviction notices.

While other cities have expressed interest in a statewide holding period bill, virtually none of the speakers at the rally described the negative impacts of Ellis speculator evictions in other jurisdictions. Anyone listening to the rally would think that Ellis evictions were a San Francisco problem requiring a Sacramento solution.

Leno will introduce his legislation next week, and it will likely be a statewide bill at the start. But if other cities are not willing to go to the mat for Ellis reform, and other mayors do not follow the lead of San Francisco’s Ed Lee and make reform a top priority, then it is hard to see how a statewide bill could pass.

San Francisco desperately needs Ellis reform now, and legislation signed by the Governor that carves out a five year holding period for San Francisco would be the single most important action addressing the city’s housing crisis that can be taken in 2014. No other action will more greatly reduce speculator evictions of some of San Francisco’s most vulnerable tenants.

(I should note that the mayor’s tripling of funding for Ellis Act eviction legal representation is already making a difference. But that’s for another article)

The Reverend Norman Fong of the Chinatown Community Development Center (CCDC) had my favorite line among the many speeches. Fong noted that while we go to churches and synagogues to pray for justice, “sometimes prayer is not enough.”

It certainly isn’t enough to stop Ellis evictions, which is why Fong and over 150 Chinatown residents made the trip to Sacramento yesterday. And why all of the city’s tenant groups, along with ACCE, the Central City SRO Collaborative, the Berkeley Tenants Union (my choice for the best T-Shirt award, a picture of Superman supporting tenants), a particularly large contingent from Bernal Heights, the League of Pissed Off Voters, top officials of SEIU Local 1021, tenants from Merced, Fresno, Sacramento, Concord and Oakland, and many more took time away from their busy schedules to join the rally.

I would be remiss in not noting that Tenants Together’s agenda also includes restoring the renters tax rebate. Hene Kelly led the crowd in a rousing song supporting the rebate’s reinstatement, whose two-decade suspension speaks volumes to how California allocates money.

Here’s the story. When California hit hard times in the early 1990’s, then Governor Pete Wilson suspended the renters tax credit, which gave $60 to individual renters. He also temporarily raised income taxes on the wealthy.

But when the economy improved and tax increases on the wealthy were ended, the renters tax rebate was not reinstated. The Tenderloin Housing Clinic, which I head, led two statewide campaigns to reinstate it.

The first time we had signed support from a majority of legislators but did not get the program reinstated due to concerns of cost. The second time we had State Senator John Burton by our side and he got through a measure that gave senior and disabled tenants $250, but nothing to other tenants. Burton’s measure was an astonishing achievement in the tight fiscal climate we were operating in. Whether tenants can persuade Jerry Brown to send $60 checks to every tenant, or to even resume the senior and disabled tenant rebate, remains an uphill fight.

But that fight would not even be possible without Tenants Together’s leadership on the issue. And thanks to Tenants Together for putting together such an inspiring event. It kept the momentum going as Ellis Act reform is introduced next week.

Randy Shaw is Editor of Beyond Chron. He discusses tenant campaigns in his new book, The Activist’s Handbook, 2nd ed.: Winning Social Change in the 21st Century