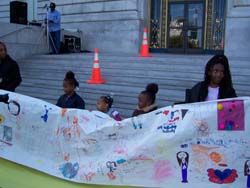 Last spring the mainstream news about San Francisco’s admittedly severe and shameful homelessness problem was decidedly upbeat. The focus was on the City’s newly adopted “Housing First” approach, with its emphasis on immediate housing for the most visible, “chronically homeless” people. The Mayor seemed both concerned and effective. The City had a task force, keys to hotel rooms were distributed to much fanfare, and Project Homeless Connect had rallied significant corporate and individual support for the cause amid a flurry of media acclaim.

The only negative news on the homelessness front was sounded by what many seemed ready to dismiss as “the usual suspects”: service providers, community- and faith-based organizations, homeless and formerly homeless people, and the Coalition on Homelessness. Their message was simple: In the flurry to get the most visible homeless off the streets (generally single adults with substance or mental health issues), families with children were being forgotten.

But suddenly the local media spotlight is shining on San Francisco’s homeless families, due to three events that took place during the past two days-events not entirely unconnected. Two were scheduled, though oddly enough, in reverse order. The third was an unscheduled and timeless tragic act. But the message sent by all three is clear: San Francisco must find a way to house its growing numbers of homeless families with children.

The event scheduled first, set for Thursday, October 20, was billed as “Hurricane Homeless Hits San Francisco,” an effort many months in the making that sought publicity for “The Forgotten” as homeless families with children were designated in a report released by the Coalition on Homelessness last spring, which generated momentum for continued community organization and advocacy around the issue of housing for families.

The first event actually to occur took place the preceding day, Wednesday, October 19. It was a Mayoral press conference on the topic of homeless families’ place in the City’s overall policies on homelessness. More accurately, it was a pre-emptive strike, in which Mayor Gavin Newsom acknowledged that his initial policy focus on “chronically homeless” had been “appropriately.disproportionate,” but claimed that such policies arose “not out of neglect,” and that culminated in talk of increased priority on housing families, and new efforts to seek increased funding for both eviction prevention and rental subsidies,

But it’s hard to steal the thunder from a crew of determined children and parents with a heartfelt message-and the statistics to back it up. So Thursday afternoon’s rally, press conference, and vigil on the steps of City Hall had a kind of resonance that no hastily convened press conference could come close to matching. Designed to call attention to the needs of San Francisco’s homeless families, it certainly did just that.leading off, appropriately enough, with a few words from those most affected: homeless children. Assembled activists and casual passersby alike applauded as the children, helping to hold aloft a banner proclaiming their needs, shyly muttered, “Every child deserves a home,” or boldly stated the concept that “No child should be homeless.”

Children, adults, and banner then disappeared into City Hall, in what turned out to be a somewhat confused attempt to deliver their message (and banner) to the Mayor personally. Meanwhile on the steps, a number of advocates delivered supporting messages. This was followed by an open mike, the lighting of candles, dispensal of hot chocolate to ward off the increasingly bitter cold. Amid the warmth and camaraderie, the discussions tended to return to two topics: The third event alluded to, the preceding day’s tragedy in which a homeless woman living in a shelter-distraught and off her medication-apparently threw her three young children into the Bay to drown; and the fact that San Francisco is still regarded as a wealthy city with resources, the sort of place in which it seems inconceivable that a single child could lack shelter.

Families at the rally asked the Mayor to take three immediate steps to implement a Housig First for Homeless Families policy in San Francisco:

1) 25% of the 3,000units of housing for homeless
people to be set aside for homeless families

2) 120 housing subsidies for homeless families at $500 per family per month,

Official documents show that there are at least 2700 membersof homess families in SAn Francisco and the numbers are growing. The im-pact of homelessness on children are devastating–homelessness negatively affects their health, development, and education. Yet of the 3000 units specified under the 10-Year Plan, only 7% are planned for families.